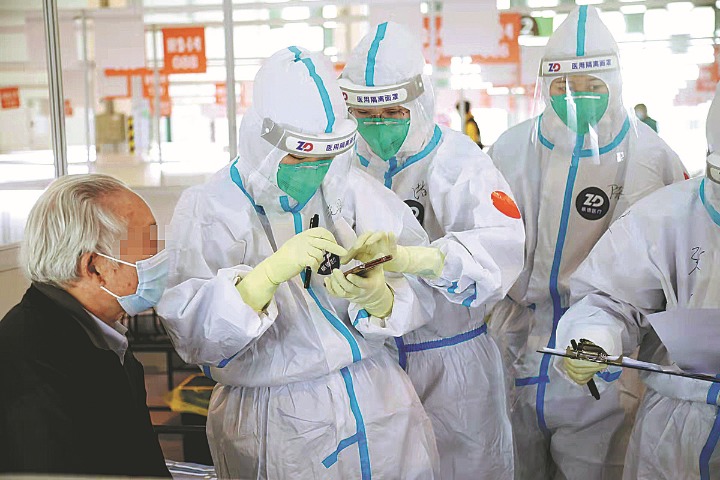 Elsie Chao, 31, who has lived in Shanghai for six years, has a wealth of experience as a volunteer caring for the elderly and children in her hometown of Hong Kong and also in Europe.

In Shanghai, she had her first experience of volunteering in the public health sector, attending a screening program for the novel coronavirus from March 18 to 20 in the neighborhood where she lives in Pudong district.

“A lot of locals here come from different countries and regions. As I lived in Europe, I can help communicate with them, and I also took the initiative to contact neighborhood officials,” Chao said.

She helped explain the grid screening plan to local residents and expats, prepare a QR code for nucleic acid testing, and maintain order on site.

“The whole country has lent a hand to Hong Kong throughout its latest wave of COVID-19, and I would like to do my part for Shanghai, my second home,” she said.

More than 50,000 residents of the city, which has a population of nearly 25 million, have joined volunteers such as Chao since the start of this month to help in the ongoing fight against an outbreak of COVID-19.

They have responded to more than 2,000 related projects posted through official online and offline channels and held different positions.

Zheng Yinghao, deputy director of the Shanghai Municipal Civilization Bureau, said, “These residents have braved the rain and winds on the front lines in the fight against the epidemic and stood out in helping the city through this difficult time. .

“Their warm gestures were widely appreciated. The volunteers act as a ‘calling card’ showing the soft power of the city.”

Chao said the work was intensive, required patience and lasted until midnight every day, but it was worth it and she felt she could help other residents in different ways.

Due to language barriers, expats may face problems when asked to queue and undergo testing in neighborhoods. Chao said she helped explain the grid screening plan, which aims to stop the spread of infections.

2022-03-28
Previous Post: Bhopal: India is returning to the roots of its civilization and culture, says MoS L Murugan at Chitra Bharati Film Festival
Next Post: Gulmaki makes history as the first Muslim woman to lead a municipality – The New Indian Express