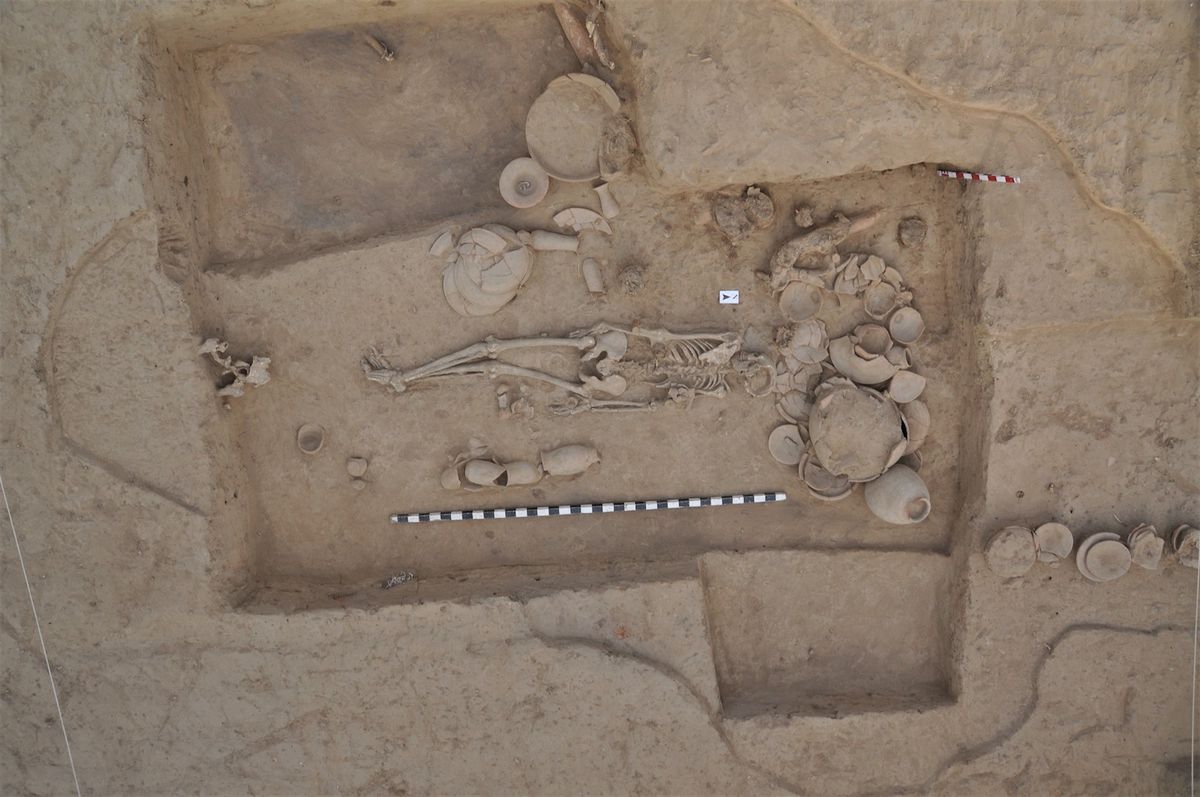 The same gene sequences, taken from a single individual who died almost 5,000 years ago and was buried in a cemetery near Rakhigarhi, India, also suggest that the Indus Valley developed an independent agriculture, without migrations major neighboring agricultural regions. This is the first time that an individual from the former Indus Valley Civilization provided no DNA information, allowing researchers to link this civilization both to its neighbors and to modern humans.

The Indus Valley, or Harappan, civilization flourished between about 3300 BC and 1300 BC in the region that is now covered by parts of contemporary Afghanistan, Pakistan and northwestern India of ancient Egypt and Mesopotamia. The people of the Indus Valley forged an incredibly advanced civilization, with large urban centers, standardized systems of weights and measures, and even drainage and irrigation systems. Yet despite this sophistication, archaeologists know far less about the civilization than that of ancient Egypt or Mesopotamia, in part because the The Indus Valley writing system has yet to be deciphered.

Crack Codes: 5 ancient languages ​​yet to be deciphered

Gathering ancient Indus Valley DNA is a huge challenge, Vagheesh Narasimhan, one of the lead authors of the new research and postdoctoral genetics researcher at Harvard Medical School, Live Science, as the hot and humid climate tends to rapidly degrade DNA. Narasimhan and his colleagues attempted to extract DNA from 61 individuals from the Rakhigarhi cemetery and succeeded with a single skeleton likely belonging to a woman who was found nestled in a grave amid round pots with her head to the north and feet to the south.

The first revelation of the ancient gene sequences was that some of the inhabitants of the Indus Valley are related by a genetic thread for today’s South Asians. “About two-thirds to three-quarters of the ancestry of all modern South Asians comes from a population group related to that of this Indus Valley individual,” Narasimhan said.

Where the Indus Valley individual came from is a more difficult question, he said. But the genes suggest that the highly agricultural people of the Indus were not closely related to their farm neighbors in the western part of what is now Iran.

Agriculture, Narasimhan said, began in the Middle Eastern Fertile Crescent around 10,000 years ago. No one knows precisely how it spread from there. Did agriculture arise independently in regions around the world, perhaps witnessed by travelers who brought the idea of ​​planting and growing seeds back home? Where have the farmers moved, taking with them their new agricultural way of life?

In Europe, genetic evidence suggests that the latter is true: Stone Age farmers introduced southern Europe to farming, then moved north, spreading the practice over time. But new genetic evidence from the Indus Valley suggests a different story in South Asia. The Indus Valley individual’s genes diverged from those of other agricultural cultures in Iran and the Fertile Crescent before 8000 BC, the researchers found.

“It diverges to a time before the advent of agriculture almost anywhere in the world,” Narasimhan said. In other words, the individual from the Indus Valley was not the descendant of wandering farmers from the Fertile Crescent. She came from a civilization that either developed agriculture on its own or simply imported the idea of ​​neighbors – without importing the actual neighbors.

Immigration and ideas are plausible ways to spread agriculture, Narasimhan said, and new research suggests both happened: immigration to Europe, ideas to South Asia. The results appear today (September 5) in the journal Cell.

However, these findings should be considered tentative, warned Jonathan Mark Kenoyer, an archaeologist and Indus Valley Civilization expert at the University of Wisconsin-Madison, who was not involved in the new research. Archaeological evidence suggests that the cities of the Indus Valley were cosmopolitan places populated by people from many different regions, so a person’s genetic makeup may not match the rest of the population. Furthermore, Kenoyer said, burial was a less common way of dealing with the dead than incineration.

“So not everything we have from the cemeteries is representative of the ancient populations of the Indus towns, but only part of a community living in those towns,” Kenoyer said.

And while the Indus individual and the 11 potential migrants found in other regions may have been linked, older DNA samples will be needed to show which direction the people and their genes were moving, a- he declared.

Narasimhan echoed this need for more data, comparing Indus Valley cities to modern-day Tokyo or New York, where people gather from around the world. Ancient DNA is a tool for understanding these complex societies, he said.

“Very large-scale mixing and movement of people is just a basic fact of human history,” he said. “To be able to document this with ancient DNA, I think, is very powerful.”