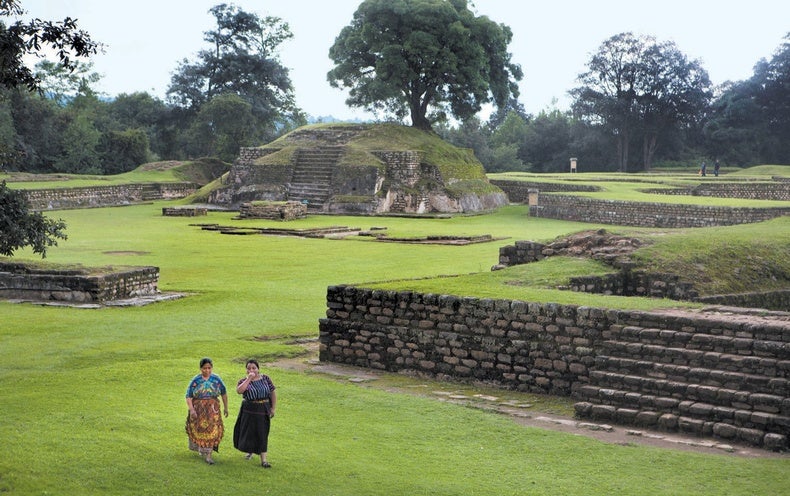 The Maya civilization once stretched hundreds of miles across Mesoamerica and the Yucatán Peninsula, with bustling cities, a thriving economy, and a booming arts and culture scene. But between the 8th and 10th centuries CE, it suffered from abrupt demographic fluctuations, increased conflicts and abandoned urban centers. Archaeologists and other researchers have considered landscape degradation, volcanoes, and drought as possible factors in this dramatic instability throughout Maya society.

For a recent study in the Proceedings of the National Academy of Sciences of the United States, researchers probed a lake bed near the ancient Maya city of Kaminaljuyú to study another possible stressor: harmful algae in the water supply. Chemicals called cyanotoxins, which make some algal blooms toxic, have been preserved in the sediments at the bottom of Lake Amititlán in central Guatemala, along with green pigments that register the presence of algae. Study lead author Matthew Waters, a limnologist at Auburn University, and his colleagues sampled a 5.5-meter core of lakebed mud and found a 2,100-year-old record of bloom algae, likely caused by runoff from settlements and farms in the watershed. The results suggest that these toxic blooms would have rivaled their modern counterparts. In Lake Amititlán (which frequently hosts harmful algal blooms today), cyanotoxin concentrations rose throughout the period in which the Maya civilization reached—and then fell from—its zenith. A previous study showed ancient algae in a lake near the Mayan city of Tikal, but Waters says his team is the first to provide definitive evidence of cyanotoxins.

The Maya were concerned about contaminated water reservoirs as early as CE 200, says Liwy Grazioso, an archaeologist at the University of San Carlos in Guatemala who was not involved in the new study. “They knew from observing nature that there were episodes where the water was not of good quality,” she says, “so they brought sand 30 kilometers away to create a filtering system.”

Scientists today are only beginning to grasp the extent of water quality problems during the period of Maya instability. Because this period featured widespread droughts, Waters says, water quantity was studied more than quality. The blooms alone probably weren’t responsible for the societal instability, he notes, but having toxic reservoirs amid the droughts couldn’t have helped.

Along with research into the composition of ancient algal blooms, Waters adds, the study “begins to demonstrate that water quality and potability should be added to the list of environmental stressors” on the Maya civilization. . The history of Lake Amititlán is a stark reminder that the land, as well as the water, must be carefully managed to avoid the pitfalls of the past.

2022-03-15
Previous Post: Community Forum to Fight Crime and Safety
Next Post: Difficult to win over voters in Balasore as the municipality still grapples with age-old problems