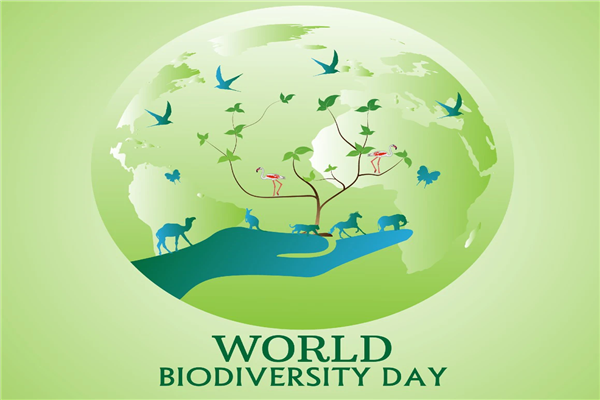 Towards an “ecological civilization”

Word ‘Biodiversity‘ was generated from two words “biological” and “diversity”. It refers to all the variety of life that can be found on earth such as plants, animals, fungi and microorganisms. Also, it refers to the communities they form and the habitats in which they live. Article 2 of the Convention on Biological Diversity gave a formal definition of biological diversity. Biological diversity is defined as the variability among living organisms from all sources, including, inter alia, terrestrial, marine and other aquatic ecosystems and the ecological complexes of which they are part; this includes diversity within species, between species and of ecosystems. Thus, we can say that “biodiversity” is the combination of life forms and their interactions with each other and with the rest of the environment that has made the Earth a unique habitable place for humans. Its rich biodiversity has been a source of life for millions and millions of different organisms on this planet. Biodiversity provides us with a large number of goods and services that support our lives. It encompasses a variety of life on earth and the natural patterns it forms. The biodiversity we see today is the result of billions of years of evolution, shaped by natural processes and, increasingly by human influence. It forms the web of life of which we are an integral part and on which we so fully depend.

Unfortunately, while men today do not seek to satisfy their needs, but orient themselves towards greed. The large-scale destruction of trees, the hunting of animals, the pollution of bodies of water, of the air we breathe, the degradation of soils and the loss of their fertility are all consequences of man’s game with nature. Playing with nature has wreaked havoc on this planet. The most worrying part is that tHuman interference with nature has led to loss of biodiversity. Over the past hundred years, more than 90 percent of crop varieties have disappeared farmers’ fields. Half of the breeds of many domestic animals have disappeared, and the world’s 17 major fishing grounds are now fished at or above their sustainable limits. Locally diverse food production systems are under threat, including associated indigenous, traditional and local knowledge. With this decline, agro-biodiversity is disappearing, as well as essential knowledge about traditional medicine and local foods. The loss of diverse diets is directly linked to disease or health risk factors, such as diabetes, obesity and malnutrition, and has a direct impact on the availability of traditional medicines. Biological resources are the pillars on which we build civilizations. The biodiversity loss threatens our food suppliesopportunities for recreation and tourism, and sources of wood, medicine and energy.

Bearing in mind the importance of biological diversity and the threats to it, the United Nations celebrates the International Day for Biodiversity or World Biodiversity Day on May 22 every year. He is celebrated to thank nature and all that it gives us. This global event, which takes place on the 22n/a of May since the year 2000; it was created in 1993 but its first seven editions took place on the 29the of December, aims to promote and raise awareness around the world of issues related to the planet biodiversity. When it was created by the Second Committee of the United Nations General Assembly at the end of 1993, December 29 (the date of entry into force of the Convention on Biological Diversity) was designated as the “International Day for Biological Diversity”. “. In December 2000′, the United Nations General Assembly adopted May 22 as BID, to commemorate the adoption of the text of the Convention on May 22, 1992 by the Nairobi Final Act of the Conference for the Adoption of the Text approved by the Convention on Biological Diversity. This was done in part because it was difficult for many countries to plan and organize celebrations appropriate for the date of December 29, given the number of public holidays that coincide with this time of year.

The United Nations celebrates this day with different themes every year. Celebrating these days with a specific theme aims to leverage knowledge and raise awareness of the dependence of our food systems, nutrition and health on biodiversity and healthy ecosystems. All of this with the ultimate goal of conserving our precious biodiversity. This year, the theme of the day is “Building a shared future for all of life”. As the global community is called upon to re-examine its relationship with the natural world, one thing is certain: despite all our technological advances, we are entirely dependent on healthy and vibrant ecosystems for our health, our water, our food, our medicines, our clothes, our fuel, shelter and energy, to name a few. Thus, the global community must re-examine its relationship with nature. This year’s theme “Building a Shared Future for All Life” emphasizes the interdependence of all living organisms on each other and how we can all strengthen these interrelationships to build a future based on the sharing resources for their best possible use. It also calls for creating civilizations based on respect for ecology and nature-based solutions.

Towards an ecological civilization

Ecological civilization in a broad sense not only includes respect for nature and sharing the values ​​of common prosperity with nature, but also encompasses the mode of production, the economic foundation and the superstructure, i.e. the system institutional developed under the guidance of these values, which create a form of social civilization characterized by the progress of man and nature in harmony, highly advanced productivity, comprehensive development of culture and sustained social prosperity. The method of production in ecological civilization is not a linear pattern of natural resources passing through the production process to become products and wastes, but pursues the efficiency of material production on the basis of ecological rationalism rather than the maximization of production. Ecological civilization pursues comprehensive human development and quality of life. Unlike the passive deference to nature advocated by ancient philosophers over 2,000 years ago, the contemporary concept of ecological civilization represents the unity between humans and nature based on the application of science and modern technology and an advanced understanding of nature. Such a type of civilization is calling younity and harmony between nature and humans supported by modern science, technology and economic development.

On this day, let us all also commit to working on the principle of reducing, reusing and recycling products. We must opt ​​for practices like organic and natural agriculture that preserve our biodiversity. Aavoiding single-use plastics like plastic straws, coffee cups, plastic cutlery, take-out containers or plastic water bottles and promoting local and indigenous biodiversity for food and nutrition are some of the issues we need to consider and embrace in our daily lives; if we are serious about conserving our biodiversity and our planet. Ultimately, it’s the Biodiversity that affects human well-being and provides the human race with the very basis to survive and thrive.