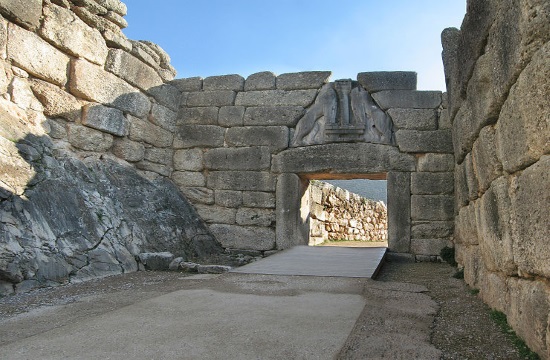 For many years, the dominant theory of how the Mycenaean civilization collapsed was that devastating earthquakes led to the destruction of its palaces in the Peloponnese, southern Greece, around 1200 BC.

Nonetheless, new evidence suggests that some type of internal uprising or external invasion could have resulted in the downfall of the Mycenaean civilization.

From 2012, a team led by German archaeologist Joseph Maran from the University of Heidelberg and geophysicist Klaus-G. Hinzen conducted research in Tiryns and Midea. The results of their research were published in the Bulletin of the Seismological Society of America.

â€œAlthough some of the observations of the two citadels studied can be explained by seismic loads, other non-seismic causes could also explain most of the damage observed. In some cases, structural damage was clearly not caused by earthquakes, “they stressed in the study, adding that:” Our results indicate that the hypothesis of a destructive earthquake in Tiryns and Midea, who may have contributed to the end of the Mycenaean palatial period LBA, is unlikely â€.

Mycenaean Greece (or Mycenaean civilization) was the last phase of the Bronze Age in ancient Greece, covering the period from around 1600 to 1100 BC. It represents the first advanced civilization of mainland Greece, with its palatial states, its urban organization, its works of art and its writing system. Among the power centers that emerged, the most notable were those of Pylos, Tiryns, Midea in the Peloponnese, Orchomenos, Thebes, Athens in central Greece and Iolcos in Thessaly. The most important site was Mycenae, in Argolida, hence the name of the culture of that time. Colonies of Mycenaean and Mycenaean influence also appeared in Epirus, Macedonia, on islands in the Aegean Sea, on the coast of Asia Minor, the Levant, Cyprus and Italy.

The Mycenaean Greeks introduced several innovations in engineering, architecture, and military infrastructure, while trade over large areas of the Mediterranean was essential to the Mycenaean economy. Their syllabic script, Linear B, offers the first written traces of the Greek language and their religion already included several deities that can also be found in the Olympic Pantheon. Mycenaean Greece was dominated by an elite warrior society and consisted of a network of palace states that developed rigid hierarchical, political, social, and economic systems. At the head of this society was the king, said wanax.

Mycenaean Greece perished with the collapse of Bronze Age culture in the Eastern Mediterranean, followed by what is known as the Greek Dark Ages, an unprecedented period of transition leading to archaic Greece where changes Significant developments have taken place from the centralized palace to decentralized forms of socio-economic organization (including the intensive use of iron). Various theories have been proposed for the end of this civilization, among which the Dorian invasion or the activities related to the “peoples of the sea”. Additional theories such as natural disasters and climate change have also been suggested. The Mycenaean period became the historical setting for much of ancient Greek literature and mythology, including the epic cycle of Troy.

In C. 1250 BC, the first wave of destruction apparently occurred in various centers of mainland Greece for reasons that cannot be identified by archaeologists. In Boeotia, Thebes was reduced to ashes, around that year or a little later. Nearby, Orchomenos suffered the same fate, while the Boeotian fortifications of Gla were deserted. In the Peloponnese, several buildings surrounding the citadel of Mycenae were attacked and set on fire.

These incidents appear to have caused the massive strengthening and expansion of fortifications at various sites. In some cases, arrangements were also made for the creation of underground passages which led to underground cisterns. Tiryns, Midea and Athens extended their defenses with new Cyclopean style walls. The extension program in Mycenae almost doubled the fortified area of â€‹â€‹the citadel. To this phase of extension belongs the impressive Lion Gate, the main entrance to the Mycenaean acropolis.

It seems that after this first wave of destruction, a short-lived revival of Mycenaean culture followed. Mycenaean Greece continues to be mentioned in international affairs, especially in Hittite records. In C. 1220 BC, the king of Ahhiyawa was once again implicated in an anti-Hittite uprising in western Anatolia. Another contemporary Hittite account relates that Ahhiyawan ships should avoid Assyrian-controlled ports, under a trade embargo imposed on Assyria. In general, in the second half of the 13th century BC, trade was in decline in the eastern Mediterranean, most likely due to the unstable political environment there.[62]

The final collapse of the Mycanean civilization

None of the defensive measures appear to have prevented the final destruction and collapse of the Mycenaean states. A second destruction struck Mycenae in ca. 1190 BC or shortly thereafter. This event marked the end of Mycenae as a major power. The site was then reoccupied, but on a smaller scale. The Palace of Pylos, in the southwestern Peloponnese, was destroyed in c. 1180 BC The Linear B records there, preserved by the heat of the blaze that destroyed the palace, mention hasty defense preparations due to an imminent attack without giving any details of the attacking force.

As a result of this unrest, specific regions of mainland Greece experienced dramatic population declines, particularly Boeotia, Argolis and Messinia. Mycenaean refugees migrated to Cyprus and the Levantine coast.[64] Nonetheless, other regions on the far reaches of the Mycenaean world flourished, such as the Ionian Islands, the northwestern Peloponnese, parts of Attica, and a number of Aegean islands.[59] The Acropolis of Athens, oddly enough, seems to have avoided destruction.

The reasons for the end of Mycenaean culture have been hotly debated among scholars. At present, there is no satisfactory explanation for the collapse of the Mycenaean palace systems. The two most common theories are population movements and internal conflicts. The first attributes the destruction of the Mycenaean sites to the invaders.

The hypothesis of a Dorian invasion, said as such in ancient Greek tradition, which led to the end of Mycenaean Greece, is supported by sporadic archaeological evidence such as new types of burials, especially cistus tombs , and the use of a new dialect of Greek, Doric. It appears that the Dorians gradually moved south over the course of several years and devastated the territory, until they managed to establish themselves in the Mycenaean centers. A new type of ceramic also appeared, called “Barbarian Ware” because it was attributed to the invaders from the north. On the other hand, the collapse of Mycenaean Greece coincides with the activity of the peoples of the sea in the eastern Mediterranean. They caused widespread destruction in Anatolia and the Levant and were ultimately defeated by Pharaoh Ramses III in c. 1175 BC One of the ethnic groups that made up these people was the Eqwesh, a name that appears to be related to the Ahhiyawa of Hittite inscriptions.

Alternative scenarios propose that the fall of Mycenaean Greece was the result of internal unrest that led to turf wars between the Mycenaean states or civil unrest in a number of states, due to the strict hierarchical social system and the ideology of wanax. In general, due to the obscure archaeological image of Greece in the 12th and 11th centuries BC. Recent archaeological discoveries tend to favor the latter scenario. Additional theories, concerning natural factors, such as climate change, droughts or earthquakes have also been proposed. The period following the end of Mycenaean Greece, c. 1100-800 BC AD, is generally called “the Greek dark ages”.