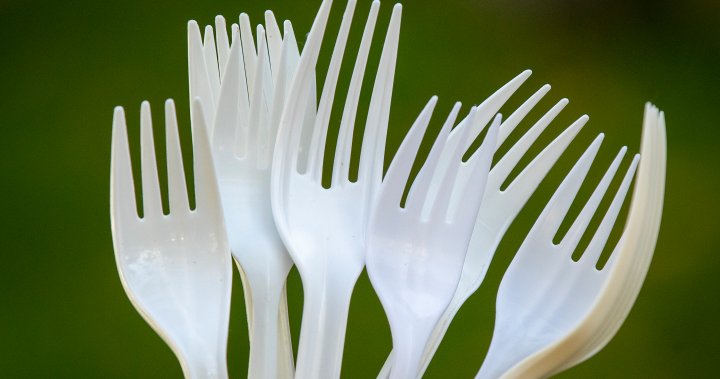 The District of Tofino made the announcement on March 11 after working with the organization Surfrider Pacific Rim in the fall of 2019.

On Feb. 22, the District of Tofino passed the Single-Use Items By-Law Amendment Bylaw, which added plastic utensils to the list of single-use items already banned, the district confirmed.

Businesses now have a six-month transition period before any enforcement of the new regulations begins, the district added.

2:00
City of Vancouver to ban plastic bags and charge for single-use cups

City of Vancouver to ban plastic bags and charge for single-use cups – December 31, 2021

‘We didn’t quite get it’: City of Vancouver to review new single-use cup fee

Surfrider Pacific Rim said it wants to focus on plastic cutlery because it cannot be processed at most recycling facilities and therefore ends up in landfills.

Bioplastic cannot be composted on the West Coast and studies have shown that it does not break down easily in the marine environment and therefore poses similar environmental threats to conventional fossil-based plastics.

“We are at a crucial moment in history. The planet is beyond its capacity to absorb the negative externalities of a linear economic system, and our communities are ready and willing to take more drastic action to stem the plastics crisis,” Amorita Adair, President of Surfrider Pacific Rim .

Tofino Mayor Dan Law said it was a big step forward in the fight against plastic pollution.

“It’s a victory in a larger battle, and I look forward to new initiatives to keep our local and regional communities at the forefront of the fight against plastic waste,” he said.

In 2019, Tofino and Ucluelet became the first in British Columbia to ban plastic bags and straws.

The District of Ucluelet is expected to follow the same bylaw change in the coming weeks.