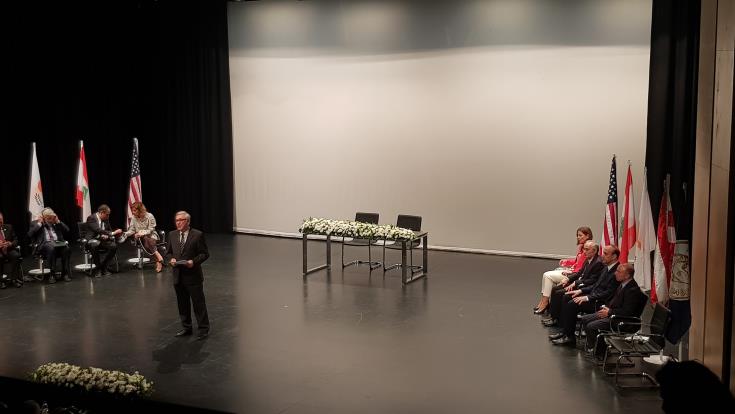 The Municipality of Paphos and the American University of Beirut (AUB) on Friday signed an agreement for the creation of an AUB campus in Paphos, in the presence of the President of the Republic of Cyprus Nicos Anastasiades and the American Assistant Secretary of State Lee Satterfield.

“The United States is proud of the bilateral relationship with the Republic of Cyprus, a valued partner and a center of stability, democracy, and prosperity in the eastern Mediterranean and beyond,” he said in his speech during of the ceremony the United States Assistant Secretary of State for Education. and Cultural Affairs Lee Satterfield.

Satterfield echoed Under Secretary of State Victoria Nuland and thanked the Republic of Cyprus and the Cypriot people for all they are doing to support Ukraine “against an unjustified, unprovoked and unjust war by Vladimir Putin “.

“While the bilateral relationship between our governments is strong, so is the relationship between the American people and the people of Cyprus. The people-to-people ties between the United States and Cyprus are the foundation of our successes in various areas of engagement. Our people-to-people exchanges provide a model that allows us to develop our shared values, our shared security and our shared prosperity,” she said.

She added that they were proud of the long partnership with the American University of Beirut, a model of American values ​​and educational standards and a beacon in the region and around the world. For more than 150 years, she added, AUB has provided the highest quality American-style education to students around the world. The US government’s commitment to AUB, she noted, is reflected in more than $150 million in support over the past two decades.

“Today is a historic day for the American University of Beirut, for the people of the Republic of Cyprus, and for global higher education. The United States is deeply committed to international education and supports the goal of Cyprus to become an educational center in Europe and AUB’s goal to become a truly international institution.We welcome opportunities for more Americans, from more diverse backgrounds, to participate in study abroad. And we welcome more international students and scholars to our classrooms to learn alongside their American peers and share their perspectives and cultures,” Satterfield said.

The Mayor of Paphos Phedonas Phedonos, said that the establishment of a university in a small town has a special and unique significance which cannot be compared to any other event in the life course of this town.

“Our small city with a long and rich history is especially honored tonight by the arrival of the American University of Beirut,” he said.

As he said, the presence of such a great university in Paphos will undoubtedly bring some of the most talented and intelligent young people from any country in our region to the city.

Regarding the American University of Beirut, he said that few universities in the world have the tradition, history and influence of this university.

“For decades, it was the only and most important university in the Middle East, a tradition that continues today, despite the difficulties and competition that arise from time to time, and remains among the top 220 universities in the world. world. Tonight Paphos speaks to the towns of our neighborhood, promising that in the years to come it will play an important role in spreading knowledge, the principles of Renaissance shaped humanism and liberal ideas such as they originated in ancient Greece and have reached as far as today,” he says.

He also said that the new university can function reliably and effectively as an ambassador of the theory of peace and democratization through the promotion and transmission of quality higher education.

In his speech, AUB Board Member and Chairman of the AUB International Advisory Board, Ambassador Frank G. Wisner said that by inaugurating a new campus of the American University of Beirut, “We are adding a page to the history of our university and to America’s contribution to higher education in this region.”

“Thanks to the generosity and foresight of the Republic of Cyprus and the Municipality of Paphos, we are now able to extend our university’s contribution to the development and dissemination of knowledge across the Eastern Mediterranean,” said he noted. He further stated that AUB is opening its doors in Paphos determined to fully develop a new campus in the coming decade.

He also said the new institution will serve as a demonstration of U.S. interest and commitment to the Eastern Mediterranean.

“As educators and scholars, we know we are standing on hallowed ground. In today’s world, institutions of higher learning are aware of our debt to the civilization of which Cyprus is a part and to which Cyprus has made important contributions,” he said.

AUB President Dr. Fadlo R. Khuri said that the establishment of the new campus in Cyprus will enrich the exchange of ideas, knowledge and goals that already takes place on the Beirut campus and spread the unique university culture, enhancing both the diversity and excellence of AUB.

He also mentioned that the American University of Beirut has deep ties with Cyprus, as generations of Cypriots have attended the university for many decades, only diminishing during the final years of the Lebanese Civil War.

The President of AUB said that the University will welcome students in the fall of 2023 where they will enroll in undergraduate and graduate courses in Politics, Philosophy and Economics (BA); psychology (BA); computer science (BS); industrial engineering (BS); engineering management (MS); business administration – management (BBA); and Business Analytics (MS). This campus will be an integral part of AUB. There will be extensive interaction with the Beirut campus in the form of student exchanges, faculty exchanges, collaborative research projects, expanded online and hybrid learning opportunities, etc.