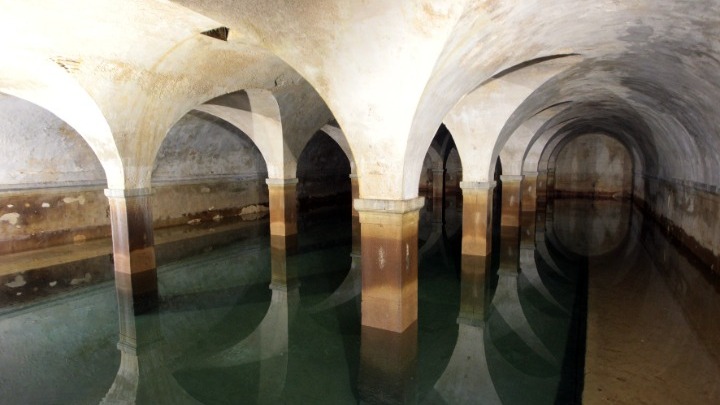 The planning of the Municipality of Halandri for the integration of the old aqueduct in the daily life of the citizens is being implemented step by step and thus be a â€œlivingâ€ element of the city. Hadrian’s Aqueduct was built in the 2nd AD. century by the Roman Emperor Hadrian, aimed at the water supply of Athens from the storm waters of Penteli and Parnitha. In Chalandri, its reopening 19 centuries later, started as a vision and ends in action, within the framework of the European program CULTURAL H.ID.RA.NT

It is now preparing to operate again, via an irrigation network, but also a major renovation, which will accompany the plumbing and will connect the monument to a pedestrian street, with Rematia Halandriou and the city center. This ambitious and daring plan, which was presented for the first time by APE-MPE last February, includes the creation of an irrigation network in the urban area, since two pumping stations will be organized in order to make the Aqueduct productive and non-potable water accessible. to the inhabitants. of. From the two water intake points, the aquifers will be filled which will transport the water to the most remote areas of the city, which in fact will not have direct access.

â€œThe idea was not to promote Hadrian’s aqueduct as a simple monument, but to make it productive and participate in the city. So it aroused even more interest, it was a much more interesting approach, â€Deputy Mayor of Planning and e-Government Costas Gerolymatos told APE-MPE.

The first steps have already been taken and above all, a diverse and interactive Water and City Festival was set up in September, while at the same time the municipality collects and digitizes cultural material and archives related to Hadrian’s Aqueduct.

It is now the turn of the construction of the country’s first network exclusively for non-potable water, which is now carried out by EYDAP in collaboration with the municipality of Halandri and the route that will follow has already been finalized, with the result that the The water flowing inside Hadrian’s Aqueduct becomes accessible again to residents and for their irrigation and other needs. This fact will also contribute to the economy of drinking water, since it will no longer need to be consumed and wasted for non-potable uses.

Essentially, the network reuses the untapped amounts of water that flowed into the abandoned Roman aqueduct. This water, resulting from hydromassage, is reused in a circular economy logic, helping to save drinking water and precious energy.

The project consists of two distinct parts and has a total length of 4 km. One section concerns the area of â€‹â€‹the Establishment. Starting from Adrianiou 102 well and El Alamein street reservoir, it runs on one side along Rematia and on the other to Rizareio school.

The second part of the network, starting from Adrianiou well 85, runs along Ethnikis Antistaseos Street to Agia Varvara Park. In both sections there are branch lines and they are part of a general plan to extend the non-potable water network to Chalandri, but also along Hadrian’s aqueduct as a whole.

This means that citizens who live near the underground network and wish to be connected, will be able to directly obtain non-potable water for various needs, such as irrigation. For residents who do not live nearby, the municipality will take care of the distribution of non-potable water from groundwater.

“We are now creating a direct relationship of Hadrian’s aqueduct with the citizens and not just a mausoleum or a museum,” Gerolymatos told the Athenian-Macedonian news agency. “As long as there was water, we wanted to take it and distribute it to the inhabitants. It will be done in two ways. The first for those who connect directly to the network and the second with the aquifers, so that we can to carry water to areas that are not nearby. So we design these two networks. “

The deputy mayor of Halandri mentions an additional parameter: â€œWe will ask the inhabitants who will participate and obtain water, to manage it after the end of the project. Management, expansion and maintenance will be their business, under the supervision of EYDAP and under the auspices of the municipality. It is something that we often meet abroad, but for Greece it is a pioneer “.

Regarding the difficulties that may have arisen, Mr. Gerolymatos declares: â€œAll the attempts we made at the beginning of the year and all our efforts were difficult to make due to the pandemic. I think now the conditions are much better for him to go ahead and find the people’s response. “

Finally, schools with various roles participate in the development of the program, either by designing by the children themselves the spaces that will be regenerated around their school and will be irrigated by Hadrian’s aqueduct, or by design workshops. participatory. The pupils of the 12th elementary school have already designed their reservoir, making sure to add enough greenery around it.

â€œThe pupils of our city and the participation of schools are part of the project. The children designed the visible part of the network for their school. It will soon be auctioned, â€concludes the deputy mayor of Halandri.