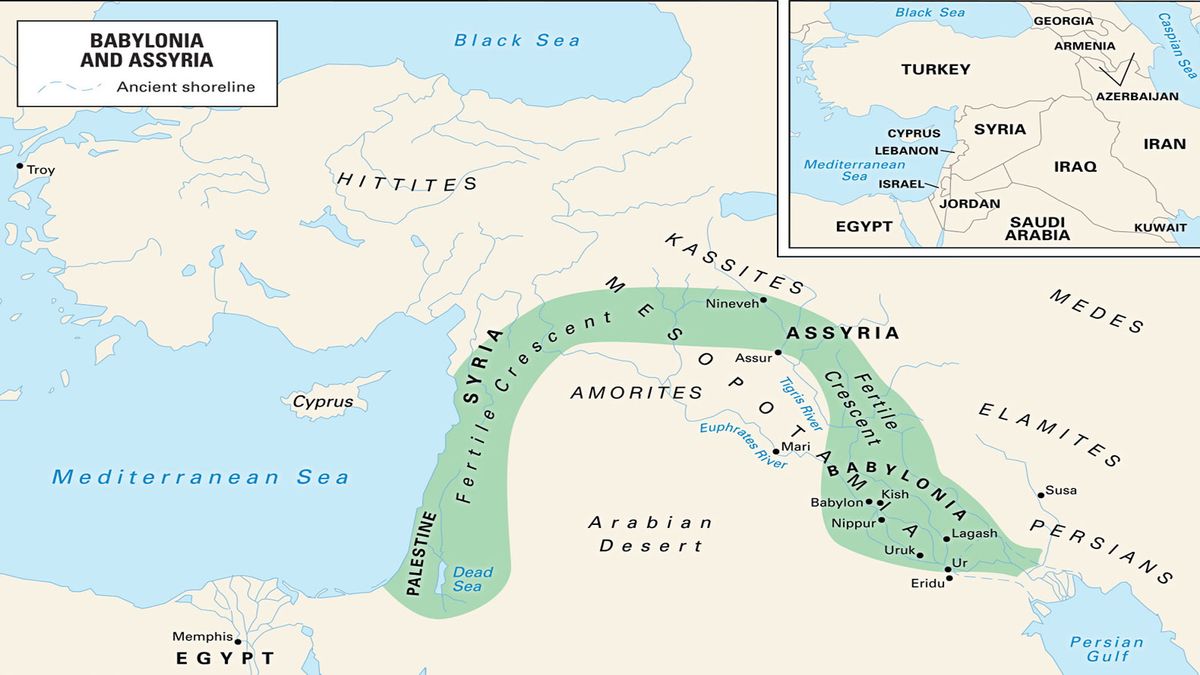 The Fertile Crescent was truly the cradle of civilization

When the last Ice Age ended nearly 12,000 years ago, the climate warmed, seas rose and rains fell on the grassy steppes of the ancient Near East. It is here, according to archaeologists, in a semi-circular region now known as the Fertile Crescent, that agriculture may have taken root, some of the world’s first major cities were built, and humans developed some of the first clear characteristics of “civilization”. including writing, mathematics and religion.

The term “Fertile Crescent” was coined in 1914 by American Egyptologist James Henry Breasted in his popular school textbook “Contours in human history. He used it to describe a crescent-shaped region encompassing Iraq, Syria, Lebanon, Jordan, Israel, Egypt, and parts of Turkey and Iran.

“The first abode of men in this great arena of Western Asia is a border region between desert and mountain – a sort of cultivable fringe of the desert – a fertile crescent having the mountains on one side and the desert on the other” , wrote Breasted. “This great semi-circle, for lack of a name, may be called the Fertile Crescent.”

More than 10,000 years ago, the nomadic peoples of this region harvested the wild grasses that grew in the rainy foothills and gathered in small villages. Over the millennia they began to domesticate wheat and barley (beer was one of their first and best ideas) and raise wild game in domesticated goats and sheep for meat, dairy and wool.

The agricultural revolution began in earnest when farmers learned to irrigate the fertile soils of river valleys, where layers of mineral-rich silt allowed larger and more regular harvests, which supported larger and more permanent human settlements. .

There were very large settlements and even some proto-cities in Mesopotamia as early as 5000 BCE, but nothing compares to the grandeur and cultural significance of Uruk, a massive fortified city in Sumer (southern Mesopotamia ) which reached its peak from 4100 to 3100 BCE.

“Uruk was huge, it was walled, it had monumental buildings – it really dwarfed everything else in the area,” says Amanda Podany, author of “The ancient Near East: a very short introductionand professor of history at California State Polytechnic University. founded.”

The region’s agricultural abundance meant that people had the resources and time to build some of the world’s earliest monumental architecture, including huge temples on terraces. They also built warehouses for surplus grain and fortified walls around their cities.

“You don’t build walls unless people threaten you,” says Daniel Snell, a specialist in the ancient Near East who taught history at the University of Oklahoma. Podany wonders if one of the reasons Uruk grew so big was that people gathered there to seek refuge during a time of war.

At its height, archaeologists estimate that between 25,000 and 40,000 people lived inside the massive mud-brick walls of Uruk. While many were farmers, there were also weavers, artists, priests, scribes, construction workers and brewers. Podany says the Uruk period marked the beginning of an urban revolution that reshaped human society worldwide.

“It was a slow revolution, but in terms of human history it’s revolutionary,” says Podany, “because once people started living in cities, they never stopped.”

Perhaps the greatest cultural innovation to come out of Uruk’s 1,000-year period was writing. Some of the earliest cuneiform tablets have been recovered from Uruk, where historians believe ancient scribes used wedge-shaped writing to track grain crops, domestic animals and other products, which were collected and redistributed to the people and the gods.

“These are cultures that had an impressive ability to memorize a lot of things, but there was a limit to that,” says Snell. “A colleague of mine says cuneiform writing was like an old thumb drive. When they needed more memory, they had to find a way to store it.”

Podany says that the first people to invent writing wouldn’t have thought they were inventing writing, at least not in the way we think of it. All they wanted at first was a system to keep track of goods and numbers, not to convey complex ideas or poetry.

Over time, however, the flexibility of this original cuneiform script was adopted by different ancient cultures and languages ​​(Sumerian, Akkadian, Babylonian, etc.) and employed for increasingly complex forms of expression, including including ancient literature (“The Epic of Gilgamesh”) and law (Code of Hammurabi).

If writing wasn’t enough, there is also evidence that the wheel was invented around the Uruk period. Interestingly, the very first wheels were not used for transportation, but for making pottery.

“Pottery from the Uruk period is the first to be thrown on a horizontal wheel,” says Podany, meaning they were able to mass-produce pottery in a way that was not possible before.

Historians don’t know when, but at some point around the Uruk period, someone had the brilliant idea of ​​turning the horizontal potter’s wheel on its edge and pairing it with a cart, allowing transport over long distances of goods and people over land. Since these ancient wheels were made of wood, none of the earliest specimens have survived, but Podany says tiny clay-wheeled carts – toys, perhaps? — have been recovered from Uruk and other sites in Mesopotamia.

60 seconds in a minute? Thank the Sumerians

More than 5,000 years later, we tell the time using a number system invented by the Sumerians of ancient Mesopotamia. Today, we use a “base 10” (decimal) system for most of our calculations, but the Sumerians relied on two other systems: “base 12” (duodecimal) and “base 60” (sdemandimal).

The number 12 makes sense, since the Sumerians were the first to understand that there are 12 lunar cycles in a year and to divide day and night into 12 periods (a precursor to the 24-hour day). Historians like Podany believe that 60 was such an important number for the Sumerians because it could easily be divided into so many whole numbers.

The use of base 60 was passed down over the millennia from the Sumerians to the Babylonians to the Greeks to medieval Islamic scholars and finally to Europe, where the first second-hand clocks were not invented until the 16th century.

2022-01-24
Previous Post: Explosion in the West region: the government will rebuild the community of Appiatse
Next Post: NIU today | Rhiannon Gurley, ’02, brings the local community together through art