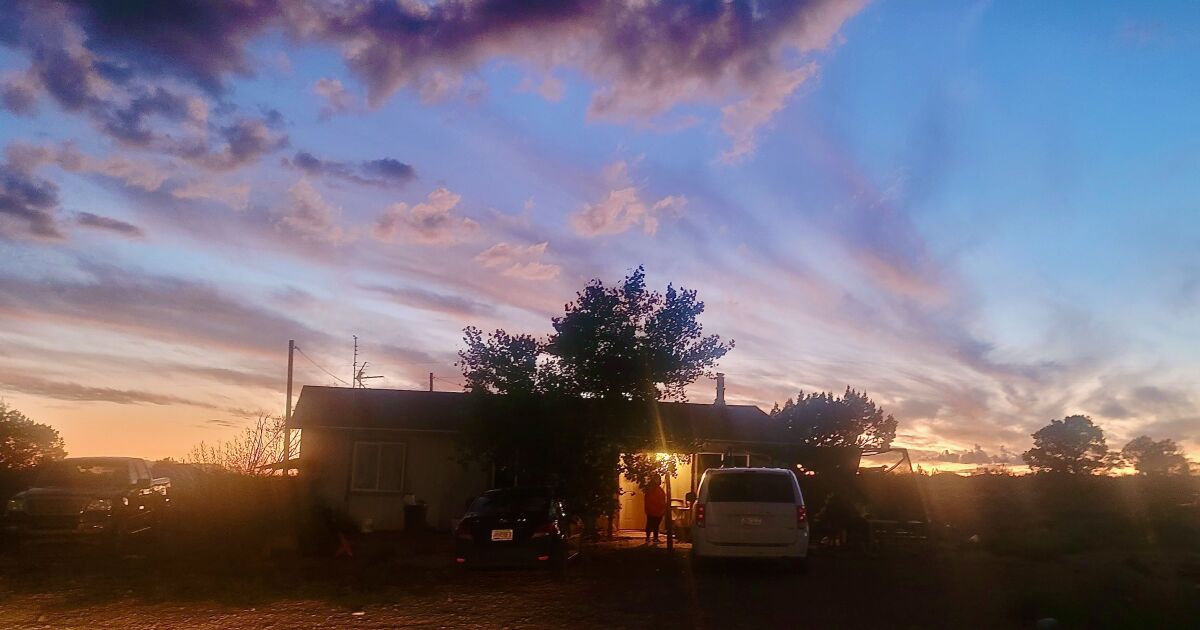 The church helps bring electricity to the Diné community of Westwater

BLANDING, Utah — Renae Gene admits having electricity for the first time in her Diné community of Westwater is taking some time for her and her four children to get used to.

Electricity is fast and always available, there’s no need to worry about gas levels in generators or solar panel storage levels, and the family is now learning to be conservative and conscious with monthly bills. of public services.

But Gene – a member of the Blanding 7th Ward in the Blanding Utah Stake – noticed another stark difference on September 1, the first day electricity surged through new power lines strung along newly installed utility poles in the 29 Westwood residential lots.

This difference was the change in evening sounds. Gone is the loud hum of generators powering homes.

‘After the power came on everything seemed to have died down in Westwater – the generators weren’t working so there was no noise,’ she said. “You can hear the animals and the crickets and the dogs barking.”

Power in the Westwood community is the first phase of a much-needed two-part utility project for the Diné (Navajo) community just west of Blanding, Utah, across the bed of the small creek bearing the name of Westwater.

The project – to bring public electricity and culinary running water – to Westwater residential lots is a cooperative effort between the State of Utah, the City of Blanding, the Navajo Nation, the Navajo Tribal Utility Authority , the Utah Associated Municipal Power Systems, and The Church of Jesus Christ of Latter-day Saints, with the church playing a key role in funding the project.

Community members and project stakeholders commemorated the completion of the electrical phase with a celebratory ceremony and dinner on Friday, September 16. Dieter F. Uchtdorf of the Quorum of the Twelve Apostles and Jose L. Alonso, First Counselor of the North America Southwest Region (southeast Utah belongs to this region, not the Utah of the Church) represented the Church at the event.

Joining Utah Lt. Governor Deidre Henderson and others as keynote speakers, Elder Uchtdorf highlighted the successes of the collaboration by revisiting the message of his famous October 2008 general conference address “Raise Where You Stand.” .

The apostle told Church News that he knows about the project’s past, as it was stuck with divisions, difficulties and obstacles. “It was possible to get closer…and as we get closer and elevate where we are, we can move anything in the world.”

Elder Uchtdorf praised the lieutenant governor’s persistent efforts and close collaboration with the North America Southwest Region Presidency, which he called “very helpful here.” He also singled out Larry J. Echo Hawk, an emeritus General Authority Seventy who served as U.S. Assistant Secretary of the Interior for Indian Affairs and now works in the office of the governor of Utah as a special adviser on Native American affairs. .

“It was Brother Echo Hawk who brought this to the governor and said, ‘This is a place where we have to do something—this has to be done,’” Elder Uchtdorf said.

He joined several others who publicly and privately highlighted Elder Echo Hawk’s encouragement and persistent efforts to entice state, city, tribe, utilities and church as the key to the success of the project.

Elder Uchtdorf, who stopped at Westwater after arriving in Blanding and before the ceremony began, compared the difference between the community and its lack of water and electricity with adjacent Blanding and its comprehensive utilities. “I said, ‘Wow, that’s such a short distance, but it’s almost further than the moon as far as these basic services go.’ …”

The celebration included an invocation which served as a healing blessing on the community and the Westwater Valley as well as a “turning on the lights” ceremony as the lights outlining a large “W” block were illuminated. Both Navajo and English were used by those who spoke and sang, and fittingly, a view of the Westwater community provided the backdrop for the ceremony held at the university’s Blanding campus. of Utah State.

Bringing electricity and water to Westwood has been a political and logistical challenge and a hot potato over the years.

Originally a settlement on Bureau of Land Management land, Westwood sits on property that the Navajo Nation purchased half a century ago. But it is not part of or adjacent to the Navajo reservation, nor is it part of the town of Blanding.

The electrical portion of the project now connects Westwater to the Blanding electrical grid, providing a passage for electricity owned by the Tribal Utilities Authority.

“Still weird enough to have electricity”

Gene, 32, grew up on land in Westwater adjacent to where his tiny home now stands, using candles and oil lamps for lighting. “We didn’t know anything different,” she said of the lack of electricity. It wasn’t until after high school that “I realized it was easier in town” for Blanding residents who had homes with electricity.

Now she and her four children – aged 1 month to 12 years – will have electricity not only for lighting, but also for heating and ventilation, cooking, refrigeration, appliances, television and entertainment systems.

“It’s still kind of weird to have electricity after so many years of not having it,” Gene admitted.

“Now it’s just water we’re waiting for, so hopefully that will be accomplished next year.”

There is some doubt at the time, as Westwater was told to expect power last Christmas. But material supply chains have stretched since the COVID-19 pandemic, and electric start has been delayed by more than half a year.

Culinary running water is the second key part of the promise to bring basic utilities to Westwater, with broadband for internet services coming later. Plans call for a deep water well for the community.

For now, Westwater residents will continue to truck water to their homes. For Gene, that means buying a $10 bill for 1,000 gallons, traveling to the city’s watershed to collect the water, then returning to transfer it to an outdoor underground storage tank. However, like many of her neighbors, she can only haul around 300 gallons at a time, and the ticket is single-use, meaning she actually gets less than a third of what she could and pays many times more on a per-gallon average cost.

Light, Water and the Savior

In his remarks at the ceremony, Elder Uchtdorf compared the work of the various Westwater Project partners with the work of the global church in trying to follow the Savior’s example. “By focusing on one and being our brother’s keeper, we strengthen and unite divided communities and help make the world a better place.”

And with lights and water delivered to Westwater, the apostle testified of Jesus Christ, reminding his listeners that the Savior is the ultimate light and living water for all.