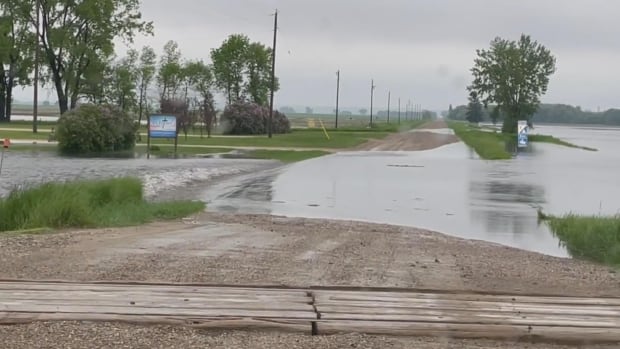 The Municipality of North Norfolk declared a state of emergency after being pounded by rain overnight Monday through Tuesday causing flooding in the Austin community.

The municipality said in a news release Tuesday morning that a local state of emergency had been declared after what it called an “unprecedented” amount of rain fell Tuesday morning.

Even though the water has already started to recede in Austin, 130 kilometers west of Winnipeg, Bergen expects a state of emergency to remain in place for the time being.

“We’ll need to…do a lot of infrastructure repairs and that kind of stuff. So for a few weeks, probably, for sure,” she said.

The municipality has warned residents east of Austin, including the community of MacGregor, of the possibility of water rushing into creeks, ditches overland.

MacGregor resident Brad Isbister said he could usually sleep through anything, but Monday night’s heavy rain woke him up.

He said locals reported three to four inches of rain overnight – about 75 to 100 millimeters.

That would be about a third of a normal season’s total precipitation, CBC meteorologist John Sauder said.

Isbister said he hadn’t seen such rainfall since 1997.

Flooding washes away roads and culverts near MacGreogor, Manitoba.

The RM of North Norfolk has declared a local state of emergency. Video submitted by Brad Ibister to MacGregor, Man.

The street where he lives is now flooded. He had no water at home, but his yard is completely flooded.

“Now I have lakeside property, so to speak,” he told host Marjorie Dowhos in a Tuesday interview with CBC. Radio Midi.

However, he thinks of the farmers, who can’t seem to take a break.

“I can’t even imagine what they have to deal with for the stress. I mean, you put in a late harvest and hope for some kind of return on that. And they get hammered by the rain and washed away.”

Heavy rains and thunderstorms are once again rolling into southern Manitoba. Marjorie Dowhos hears about the direct effects of rainfall from MacGregor resident Brad Isbister, followed by an update from CBC meteorologist John Sauder.

About 115 kilometers southwest of MacGregor, Souris Glenwood Golf Course is set to cancel upcoming Father’s Day tee times, after the stream running through the course overflowed and washed away two bridges needed to access the equipment store on the other side.

As of Tuesday afternoon, course officials were still unsure of the damage — if any — on the other side of the creek.

However, Bob Warden, a course manager, is always in good spirits.

“We have quite a few volunteers based here who will really help with the cleanup. That would be the main thing, and then see if we can find the bridges downriver,” he said.

The clubhouse is elevated above the creek and has remained dry. Although tee times are canceled for the week, people can still pick up food and drinks.

More rain and pop-up thunderstorms are possible for the region on Tuesday, with a few more showers overnight Wednesday, but residents can expect a few days of drier weather after that, Sauder said.

“We just have to be patient.”