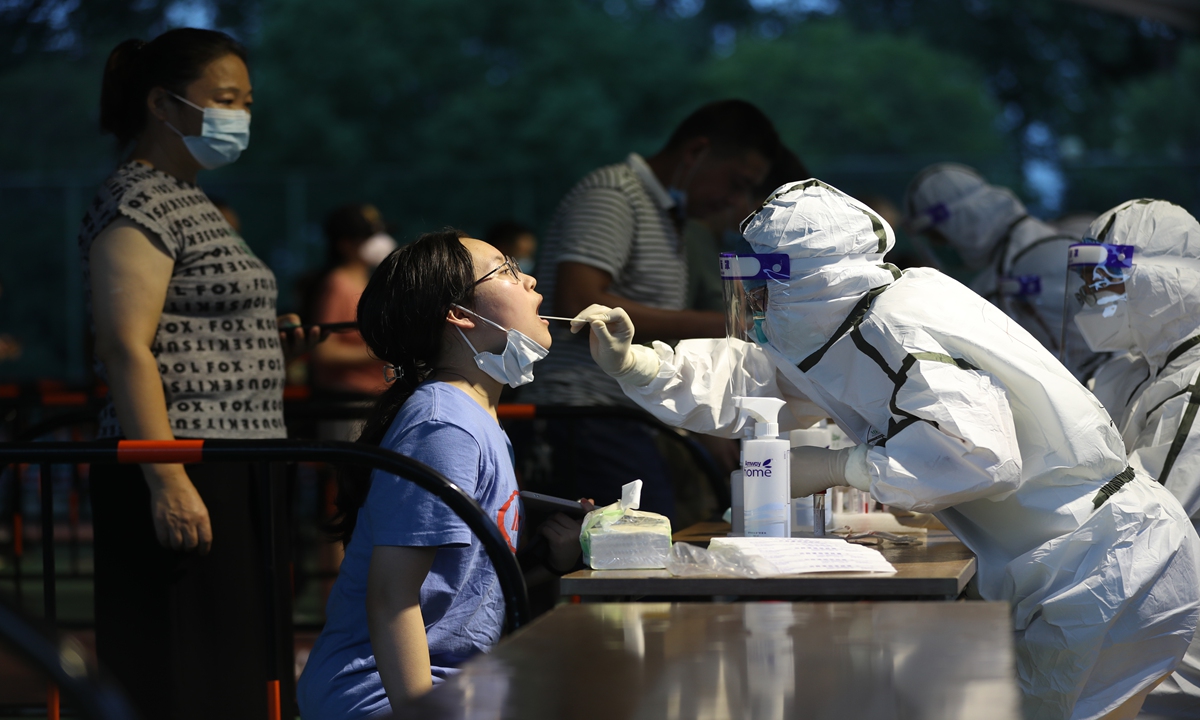 Seal communities in Yangzhou, a city in eastern China, in the main urban area; 60% of infections linked to mahjong salons

Citizens of Yangzhou, east China’s Jiangsu Province, undergo nucleic acid testing on Sunday as part of the latest outbreak with a total of 94 confirmed cases reported on Tuesday. Photo: IC

The city of Yangzhou, in eastern China’s Jiangsu province, has placed all communities in the main urban area under closed management, starting at midnight Tuesday, while continuing its strict control of access routes to and out of the area to prevent the spread of the COVID-19 epidemic.

Yangzhou has become another city of concern amid recent outbreaks, as of 45 new local cases were reported in Jiangsu on Monday, 40 in the city. 19 of them are mild and 21 are ordinary, the local health authority said at a press conference on Tuesday. The latest outbreak in the city was linked to the resurgence of Nanjing, another city in Jiangsu.

Since its first two cases were reported on Wednesday, there are a total of 94 confirmed cases and two asymptomatic infections in the city’s latest outbreak, as of Tuesday. Two of the confirmed cases are in severe conditions.

The city has one high risk area and 29 medium risk areas at the time of publication.

The second round of large-scale nucleic acid testing in the main urban area is nearing completion. By 12 noon as of Monday, about 1.5 million people had been sampled.

The city has improved its management of people involved in key urban areas and high-risk locations since July 21, and those with yellow or red health codes.

In this cycle of the epidemic, the first confirmed case in Yangzhou was a 64-year-old woman surnamed Mao from Jiangning District in Nanjing, Jiangsu. She arrived in Yangzhou by bus from Jiangning on July 21 and lived with her sister, who was also infected.

The trace report showed that Mao and his sister visited three local mahjong parlors to play cards, which made the salons “the eye of the storm” in this round of the outbreak.

Mao is under investigation by Yangzhou police for hiding his route and causing the COVID-19 outbreak in the city.

According to statistics from the epidemiological survey on Sunday, 43 confirmed cases in Yangzhou had been in mahjong lounges.

Local authorities have asked everyone who visited the chess rooms after July 21 to report to community staff or the police for further investigation.

The trajectory of cases before Monday showed that confirmed cases in Yangzhou were mostly elderly people, mainly those associated with mahjong lounges.

These places are confined spaces and the air quality is relatively poor, which poses a great risk of infection. This can make local prevention and control efforts more difficult.