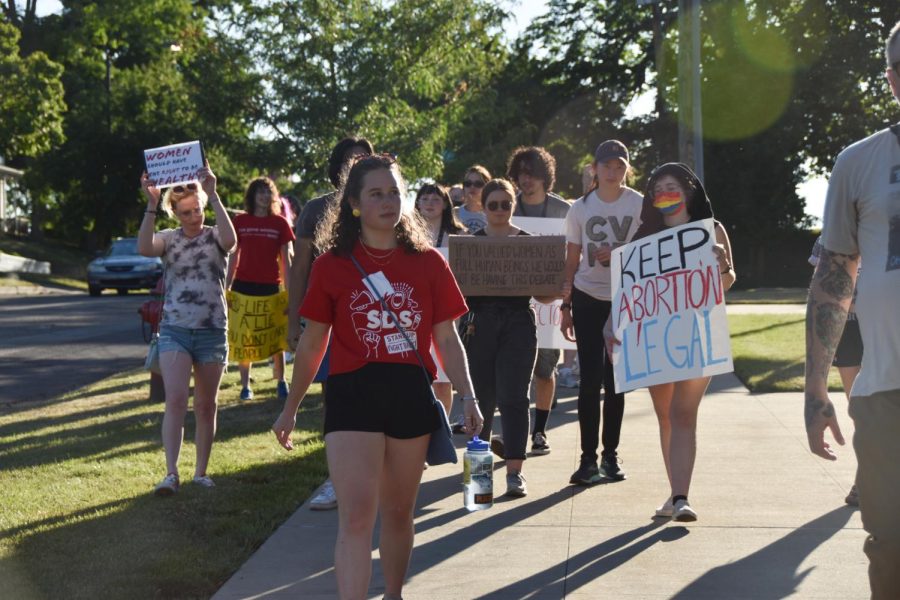 SDS and the community of Kent protest the overthrow of Roe v. Wade–Kent Wired

Fionna Fisher, an SDS organizer and sociology major, leads the group as they march to the rock in Kent State on June 24.

“Not the church, not the state, women must decide their fate.”

These are some of the chants heard at the Students for a Democratic Society protest in Kent on June 24.

On Friday morning, the Supreme Court overturned the landmark case Roe vs. Wadewho legalized abortions until fetal viability, or about 24 weeks, and set a precedent for 50 years. The decision was announced more than a month after a the leak showed that a potential reversal was coming.

Anticipation of a decision prompted the SDS to plan a protest in Kent, where around 50 people gathered at the Portage County Municipal Court.

The SDS had previously staged a protest on May 6 after the initial announcement of the leak.

“In light of our last protest on campus, which was a march in light of the leak, about 200 to 300 students, maybe more, came out to demonstrate in support of reproductive rights,” said Fionna Fisher, president of the SDS. and major in sociology. “We know the student body is very concerned about this. This is a problem felt by the majority of students on campus.

“There are a lot of emotions right now. A lot of anger and sadness, but people are coming together and it’s motivating that people care,” she said. people a voice, an action, a way to show their opinions.”

Kent State students and members of the community were also present.

“I wasn’t surprised when it happened because of the leak, but I was hollow. The government has done so many things to prevent people from having their own freedoms,” said Laurel Yoho, major of junior nutrition.” There are so much bigger issues in this world, like hesitating to have a child in a world with a shortage of formula milk and rampant school shootings, but those aren’t issues which are processed.”

Dana Schesventer, 40, said she was “devastated” when the decision was announced.

“We lose rights as women, and it’s impossible for a man to control our bodies,” she said. “We fought the Revolutionary War to keep church and state separate, so why are we allowing them to come together? And after? Gay marriage? Women’s right to vote ?

About 50 people gather outside the Kent City Courthouse on June 24 to protest the Roe v. Wade organized by the SDS.

Among the men who came out to protest the decision was political science major Janson Smith.

“It’s easy to think it doesn’t affect men in any way, but it does. Limiting women’s rights will hurt everyone. Men shouldn’t be able to dictate what a woman can do to her. body. Even if you feel like it’s not having any effect on you, the next big case might be overruled. You have to fight it while you can,” Smith said. “I’ve worked with many girls who have been victims of assaults, some of whom had to have abortions, so it’s so sickening to think about how other women going through these scenarios now and in the future are going to have to deal with it.

Although no pro-life supporters were present at the rally, their presence was heard repeatedly as passers-by shouted messages such as “abortion is murder” and “God bless life”.

The protest ended with a march to the rock on the Front campus where organizers offered closing remarks.
The SDS is not content to leave it during a demonstration. Fisher said they would continue to raise concerns as a trigger legislation in ohio is bearing fruit and further restricts access to abortion.

They are also asking people who want to get involved to call and email President Todd Diacon for an official statement.

“As university president, Todd Diacon, we believe that as a representative of the student body and Kent State, there should be at least a statement,” Fisher said. “To completely ignore him is unacceptable when this decision and Roe’s overthrow affects most, if not all of us, at Kent.”

Anyone interested in getting involved with SDS can visit their instagram or go to tinyurl.com/email-in to receive a pre-written email to send to Diacon.