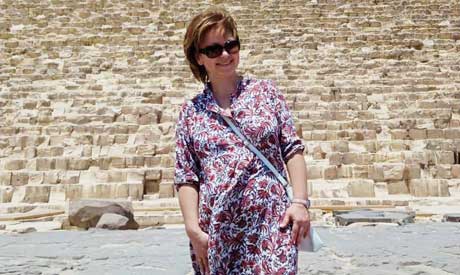 Russian Deputy Minister of Culture Olga Yarilova and her accompanying delegation visited the pyramids of Giza on Tuesday on the sidelines of their official visit to Egypt to celebrate the year of humanitarian cooperation between Egypt and Russia.

The Year of Humanitarian Cooperation was initiated by Egyptian President Abdel-Fattah El-Sisi and his Russian counterpart Vladimir Putin.

During her tour, Yarilova praised the ancient Egyptian civilization and the grandeur of the pyramids, and took numerous commemorative photos in front of the Pyramid of Cheops, the Sphinx and the Panorama area.

She thanked the Egyptian Ministry of Foreign Affairs for providing an opportunity for dialogue with representatives of the various Egyptian ministries.

She also praised the great interest of the Egyptian Ministry of Culture in building bridges of cultural cooperation between the two parties and for the warm welcome of the Russian Beriozka Ensemble for Folk Arts, which is a symbol of art. popular Russian, at the Cairo Opera House.

She also expressed her joy for the applause of the performance of the Beriozka ensemble received at the opera.

The members of the Beriozka ensemble have underlined their desire to return in the coming period to present their performances in the various Egyptian theaters.

For his part, Russian Ambassador to Egypt Georgiy Borisenko confirmed the success of the Russian delegation’s visit to Cairo, expressing his full appreciation for the efforts of the Egyptian government in organizing the visit to achieve fruitful results.

2021-06-22
Previous Post: Civilization 6: 10 tips for beginners
Next Post: Giannis Kotsiras in the Technopole of the Municipality of Athens ATHENS 9.84