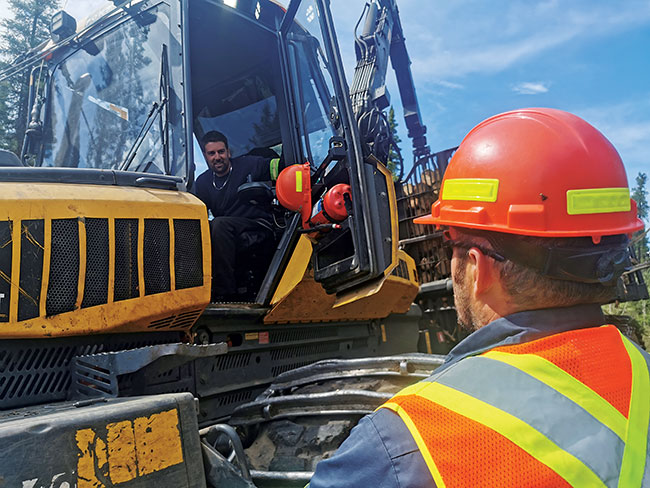 This social economy model stimulates local economic development. Last year, the community forest generated $ 418,113 in investments in 50 community projects. The amount was redistributed among 11 local development corporations, each of which received between $ 16,000 and $ 107,000.

These are considerable sums for small municipalities, some of which have barely a few hundred inhabitants, underlines Marc Laprise, president of the Integrated Resource Management Agency (AGIR). For example, the funds were used to provide food aid, invest in a play center, city library and climbing gym, and for a physical training course for young people.

AndrÃ© Fortin, owner of Forestiers AD Fortin, appreciates the quality of life he has working for AGIR, because he can sleep at home every night.

This community forest model, through which private forest entrepreneurs partner with municipalities, has become a source of local pride. â€œPeople often see the negative side of forestry, which doesn’t always get good press,â€ says Laprise, one of the initiators of the concept. â€œFor us, forests are a resource managed in a sustainable manner, while being a good source of income.

The idea of â€‹â€‹managing the forest differently originated in the 1990s, when the CLD Maria-Chapdelaine (a local development commission) launched consultations to revitalize local communities, says Laprise. “We proposed to create local companies to generate more forest income for the surrounding municipalities.”

Corporations have been created in eight municipalities, which have entered into negotiations with forest industry players such as Alliance Forest Products to carry out forestry operations close to the communities.

Local forestry companies were awarded a first logging contract of approximately 83,000 cubic meters, which had to be renewed each year. Since then, many companies have enabled municipal corporations to manage the harvest on territories adjoining public intra-municipal lands within the framework of a territorial management agreement managed by the municipalities.

Pierre Cormier, vice-president of forestry operations at Resolute Forest Products, who was at the forefront when the system was first implemented, says the model is a win-win.

â€œThe forest industry has provided us with excellent business opportunities,â€ says Michel Bouchard, AGIR CEO. â€œWe run the organization like a private company. But instead of paying dividends to shareholders, we pay social contributions locally. ”

The quality of the wood is better in the neighboring forests, specifies AndrÃ© Fortin. Thus, the operations are profitable even if the harvesting areas are smaller.

Over time, the informal arrangement with industry has improved so that AGIR, which acts as a general contractor on forest sites, now harvests over 190,000 cubic meters per year. Last year, AGIR oversaw 14 harvest contracts with Resolute Forest Products, one with Remabec and two with Norbord, including one for harvesting and another for road construction.

According to Bouchard, the openness of Quebec officials facilitated the implementation of this unique model of community forest. He believes that since forests are harvested and managed according to the needs of the environment and different users, social acceptability is much greater.

â€œWhen people have questions, they ask them directly to representatives of local business boards,â€ adds Laprise, who has been president of AGIR since 2008. â€œIt gives them a way to voice their concerns.

Three years ago, AGIR opened its membership to four new municipal corporations in order to maximize the economic spinoffs in the region. In total, 12 corporations are administered locally by more than 85 volunteers. Permitted cuts are harvested and the timber is delivered to sawmills, but the benefits to communities are much greater.

Lots of lower quality
Instead of focusing on large farming areas, AGIR plans harvests in small areas while taking other land users into account. The approach forces forestry contractors hired by AGIR to move their machines more often, which means additional costs, but there are also benefits.

â€œThe logs are bigger here, which allows us to conduct profitable operations,â€ explains AndrÃ© Fortin, owner of Forestiers AD Fortin. AndrÃ© says he appreciates the quality of life fostered by local operations because he sleeps at home every night, rather than near logging areas.

William Fortin, 24, a combine operator, also enjoys being near his home. â€œI didn’t want to go deep into the woods,â€ he said. “I like him here.”

In his operations for AGIR, he uses Tigercat 845 and 855 harvesters equipped with Ponsse H7 heads. While FCI, the company used a Ponsse Elephant forwarder, which was to be replaced by a Ponsse Elephant King. This forwarder was repatriated from Forestiers AD Fortin operations further north with Resolute Forest Products, because the company had opted for a larger model, a Tigercat 1085 with a basket of 24 tonnes.

In early July, Forestiers AD Fortin was operating an area 10 kilometers north of Saint-Edmond-Les-Plaines, Quebec, ravaged by the spruce budworm.

â€œWe are harvesting under a special ministerial plan,â€ says Bouchard. â€œInstead of harvesting one large cutting area, we harvest in plots. This allows us to better distribute the cuts and moderate the intensity of the harvest, while leaving a residual forest, which improves the landscape.

AGIR is testing a new market in this area: harvesting black spruce tops for Labrador Production, which produces essential oils.

AGIR also offers technical and professional services to the Opitciwan sawmill, the municipality of Domaine-du-Roy and other organizations and carries out urban forestry, agroforestry, agro-environment, environmental management and other projects. biodiversity as well as recreational tourism development.