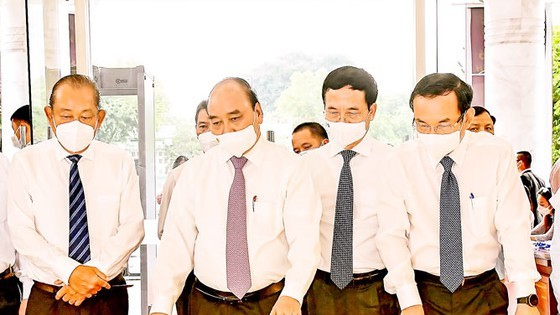 By: Jason M. Simon
In: Urban area
However, so far this area remains the least developed part of HCMC. At an investment promotion conference in Hoc Mon and Cu Chi districts last week, chaired by President Nguyen Xuan Phuc and several HCMC leaders, investors again hoped for a revival of the development of this major project. .

Mr. Nguyen Van Nen, Secretary of the Party Committee of HCMC, addressed the opening of the investment promotion conference in Hoc Mon and Cu Chi districts, saying that the conference had three main objectives. The first was to have an implementation of an action plan for project development at HCMC. The second was to fulfill the promise of the National Assembly to the compatriots and voters of HCMC, and in particular the voters of Hoc Mon and Cu Chi districts. The third was to create opportunities for agencies, units, companies and investors to continue to fulfill their mission and commit to implementing the economic recovery and development of HCMC.

Mr. Nguyen Van Nen stressed the importance of keeping a promise and that HCMC is fully committed to making every effort, with the utmost determination and at the fastest speed, with a sincere spirit to create the best conditions for that domestic and foreign companies can do business in this urban area in the northwest of HCMC. He added that at the same time, the focus should be on constantly improving service capacity, reforming administrative procedures and creating new and improved changes in the investment environment at HCMC. With these views in mind, the investment promotion conference aimed to meet the participants to implement many projects of significant socio-economic importance, with the determination to create the highest value, and contribute to the development of people and also to improve the quality of life for all.

At the conference, Mr. Furusawa Yasuyuki, General Manager of AEON Vietnam Co., Ltd., said that Japan’s leading retail company plans to develop a retail business model tailored to the needs of people and to the actual conditions of each locality, with the desire to promote sustainable socio-economic growth, promote local consumption of goods, develop civilized and modern commercial services for residential areas, elevate the way of life, create more opportunities jobs for people and contribute to the local budget.

Mr. Jun Sung Ho, General Manager and CEO of Lotte Properties HCMC, offered to find new investment opportunities in the northwest urban area and actively seek investment opportunities for projects introduced in the districts of Hoc Mon and Cu Chi. Mr. Ken Chan, representing CMIA Capital Partner and Surbana Jurong, informed about the Agri Food-Tech Eco Township project in Trung An commune in Cu Chi district. This is a project that has been researched and studied by investors since 2018, and covers an area of ​​over 1,018 hectares. The objective of the project is to constitute a high-tech agro-ecological urban zone; agro-food processing area; a logistics zone linking the regions of Tay Ninh, Binh Duong, Binh Phuoc and Dong Nai for closed materials for agro-food processing; ecological urban area close to nature; ecological balance to meet the population of 100,000 people who are experts and workers; cater to commercial and residential services in the area; generate annual revenues of approximately US$2 billion; and create stable jobs for more than 50,000 employees.

Mr. Nguyen Thanh Nha, Director of the Department of Planning and Architecture, informed that Hoc Mon and Cu Chi districts account for more than 26% of the total area of ​​HCMC, which is almost the entire territory of the city in North West. Therefore, the Northwest Urban Area is intended to be an important growth area in the northern part of the city. It is an area with high and flat terrain, natural ecosystems and beautiful and varied landscapes. Nearby are the border gate of Moc Bai, Dau Tieng Lake and the urban area of ​​Tan An-Thu Dau Mot-Lai Thieu. In order to improve the quality of life of people here and meet the development needs of the city, it is necessary to expand the scope of urbanization of Hoc Mon and Cu Chi districts as well as a map of sustainable, stable and development-oriented road of HCMC.

According to Mr. Nguyen Thanh Nha, in the future, all these areas will be centers of finance, services, industry, agricultural scientific research, health care, education, sports and residential projects. He believes that by adjusting the upcoming plan, it is necessary to reserve adequate land for agriculture and ecotourism, and also to develop Cu Chi district as the city’s green belt by prohibiting urbanization. and construction, and maintaining a wide riparian corridor along the river. the Saigon River.

Mr. Nha also wants the Cu Chi and Hoc Mon districts to be built as places with typical cultural spaces and many attractive tourist products, to become a new urban area. Along with this, the transport system, roads, HCMC-Tay Ninh expressway and river roads, bus lines connecting places of interest and tourism, also need to be invested, developed and completed. He believes that the investment in the development of these two areas is very necessary and has many prospects, which will awaken the potential of the northern area of ​​the city, which is by nature like a reserve.

Mr. Tran Quang Lam, Director of the Transportation Department, said that Hoc Mon and Cu Chi districts are areas with many advantages in planning transportation infrastructure development. This is where Ring Roads 3 and 4 will be built. These traffic projects along with the HCMC-Moc Bai highway will help HCMC and Tay Ninh Province connect with other provinces as well as Cambodia.

President Nguyen Xuan Phuc said that Hoc Mon and Cu Chi are two districts with many development advantages, being the buffer zone of HCMC in the southern economic regions along the Saigon River. The population size of the two districts is equivalent to that of Da Nang City. He pointed out that Hoc Mon and Cu Chi districts can be compared to a sleeping dragon that needs to be developed. Although HCMC contributes one third of the national budget, the development of these two districts is still weak. For example, Cu Chi’s budget revenue amounts to just over 1 trillion VND, while with the same population, Da Nang City receives tens of trillions of VND per year.

Therefore, the development of Hoc Mon and Cu Chi districts will also help HCMC solve the problem of expanding space for balanced development, attracting resources, especially in tourism, services and agriculture. of high technology, which will then relieve pressure on the population, infrastructure, housing and employment. It will also expand the living space as the population increases more and more in HCMC.

President Phuc also pointed out that the investment promotion conference is not a one-time program, ending in a single day, but will monitor and supervise the implementation of the objectives and commitments of investors when investing in the Hoc Mon and Cu Chi districts. He explained the results achieved in promoting investments to voters in both districts saying that every word and commitment at the conference must be matched by real actions and real people. President Phuc was also pleased to announce that more than 17 billion dollars of investments have been offered for the two districts in which 500 million dollars will be earmarked for project investment.

President Nguyen Xuan Phuc also pointed out that the bottleneck holding back the development of the two districts is the transportation system. He has now asked the Ministry of Transport to quickly remove these bottlenecks on mechanisms and policies to better mobilize resources by investing in key traffic routes such as the Ho Chi Minh City-Moc Bai expressway, Ring Road 3, Ring Road 4 and other river roads connecting Cu Chi and Hoc Mon to central areas, as well as airport and seaport.

President Nguyen Xuan Phuc asked investors to honor their commitments and properly implement their plans quickly to roll out the investment disbursement plan and completely avoid corruption and other delays. For all these tasks, HCMC and National Assembly MPs will monitor and raise issues before the National Assembly on which units were not implementing appropriately according to plans.