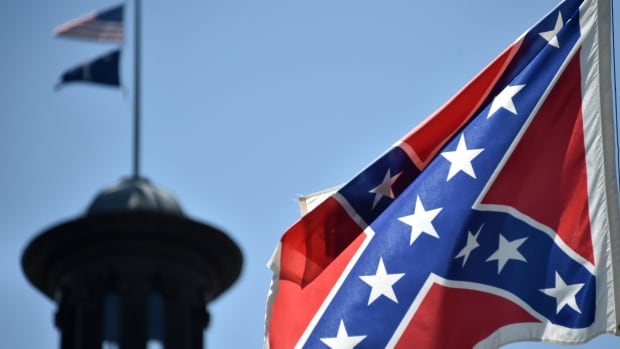 A London, Ont., woman wants to use an online petition to pressure city council to become the latest community in the province to ban hateful symbols, such as Confederate flags, from flying within city limits. the city.

The petition was launched in response to a CBC News report on Friday detailing the backlash from members of the black community. They expressed unease and bewilderment over a Confederate battle flag flying atop a 10-meter flagpole on a rural property on Decker Drive on the city’s south side, south of the 402 freeway. .

Melissa Ng said her petition was inspired by the City Council of Collingwood, Ontario, whose members voted unanimously last year to ban public and private displays of hate within the community, including Confederate flags.

“No hate symbol should be on public display,” Ng told CBC News on Friday.

These types of signs and triggers really shouldn’t be here.– Melissa Ng

“These kind of signs and triggers really shouldn’t be here. As a normal human who just wants to be ethically good, why would you fly a flag that harms others in the community?”

Ng said she was not a member of the black community, but still had strong emotions when she saw a Confederate flag.

“It irritates me. It frustrates me and it makes me feel sorry for other people in the community who are watching this, and scared and afraid for themselves and their children.”

The flag was carried into battle by white soldiers fighting to preserve slavery during the American Civil War. Since then, it has become a disturbing sight in the hands of white supremacists, who use it as a reminder that anti-black racism still simmers in North America 150 years after the end of the conflict.

Ng said she hoped her petition would spur London councilors to action, especially in a city that has made diversity and inclusion a priority since May 2019.

“It’s partly to get people talking. It’s 2022. That really shouldn’t be happening around London.”

The mayor’s office received a complaint on February 7

A spokesman for London Mayor Ed Holder acknowledged the city received a complaint about the flag on Decker Drive on February 7, but law enforcement officials concluded there was nothing to do, because displaying one is not a crime.

“We find the display, and everything the flag represents, abhorrent,” the mayor’s office said in an email to CBC News on Friday.

“Flying this flag does not violate the Criminal Code and therefore, beyond condemning the display, we are unable to take any further action.”

We find the display, and everything the flag represents, abhorrent.– Office of the Mayor of London, Ont.

The spokesman paused before answering directly when asked if the council would follow through on a possible ban, saying the mayor was absent.

“It’s too little action,” Ng said of the response from the mayor’s office.

“I understand the city is trying to follow the system they have. It’s old. It’s slow. It’s a dinosaur. We have to act on this.

Politicians rush to condemn the flag

Politicians from other levels of government were quick to condemn the Confederate flag after seeing the CBC News report on Friday.

Peter Fragiskatos, Liberal MP for London North Centre, was quick to condemn the flag on social media, saying anyone who doesn’t understand how it is a symbol of hate “should do their research”.

1/ “…there is a long history of hatred behind that as a symbol. If you don’t know why you’re flying the flag, you better do your research before you come across as a bigot or someone who perpetuates hatred.” #ldnont https://t.co/done31aepW

The three New Democrat MPs for London – Peggy Sattler, Teresa Armstrong and Terrence McKenna – issued a joint statement on Friday condemning the flag, saying it had no place in the community.

“No racialized person should have any doubts as to whether they are welcome here in London, nor should they fear for their safety because of the color of their skin. The Confederate flag has no place in London or anywhere else” , the statement said.

Ng said if the petition does not work to bring about change at City Hall, she will try to launch a similar effort at the provincial or federal level.

“If we can’t do it at the municipal level, we should at least show our solidarity and do it at other levels of government.

For more stories about the experiences of Black Canadians — from anti-Black racism to stories of success within the Black community — check out Being Black in Canadaa CBC project that black Canadians can be proud of. You can read more stories here.