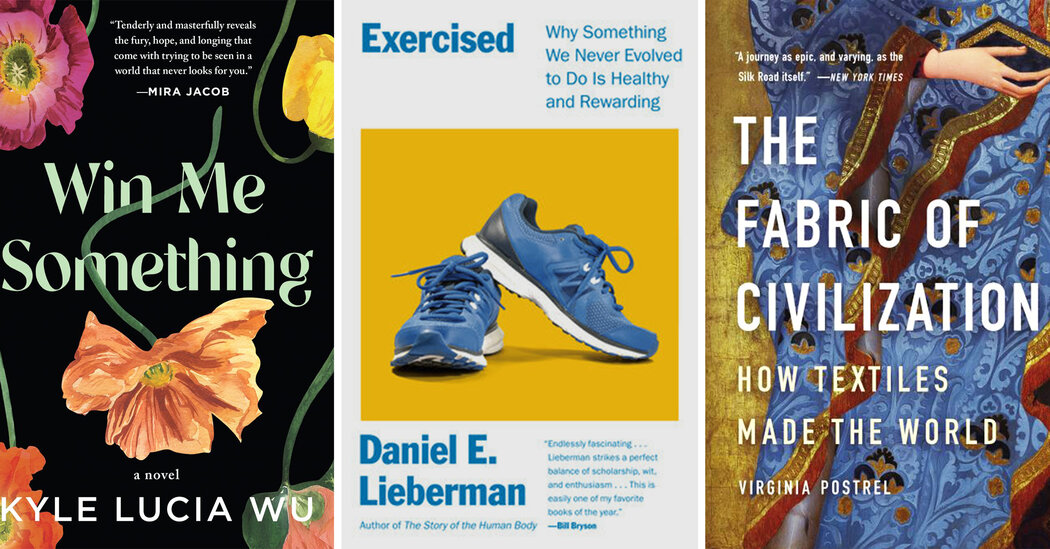 New in the paperback: “The Fabric of Civilization” and “The National Road”

WIN ME SOMETHING, by Kyle Lucia Wu. (Tin House, 280 pages, $16.95.) In this first film, a young Chinese-American woman spends nine months as a nanny for a wealthy white family in TriBeCa, prompting her to revisit her own tumultuous childhood. “Wu’s finely crafted sentences and sharp imagery render Willa’s inner angst visceral,” noted our reviewer, YZ Chin.

EXERCISE: Why something we never evolved is healthy and rewarding, by Daniel Liberman. (Vintage, 464 pages, $17.) Unlike other fitness books, “Exercised” doesn’t try to sell diets or fitness plans, observed our reviewer, Jen A. Miller. Instead, “Lieberman, drawing on his expertise and knowledge of how evolutionary forces work, takes ideas that have been twisted and twisted again, often based on flimsy information, and opens them up.”

THE KNOWLEDGE MACHINE: How irrationality created modern science, by Michael Strevens. (Liveright, 368 pages, $18.95.) “The Knowledge Machine”, wrote Times reviewer Jennifer Szalai, “is ultimately a work of philosophy and should be considered an ambitious thought experiment”. Strevens, who has a background in mathematics, traces the origins of modern science and argues that our obsession with empirical data is both irrational and inhumane.

THE FABRIC OF CIVILIZATION: how textiles shaped the world, by Virginie Postrel. (Basic, 320 pages, $17.99.) This history of textiles spans millennia, from Bronze Age civilizations to Tang Dynasty China to 16th century Europe and beyond. According to our reviewer, Dana Thomas, Postrel’s tale is “a journey as epic and varied as the Silk Road itself.”