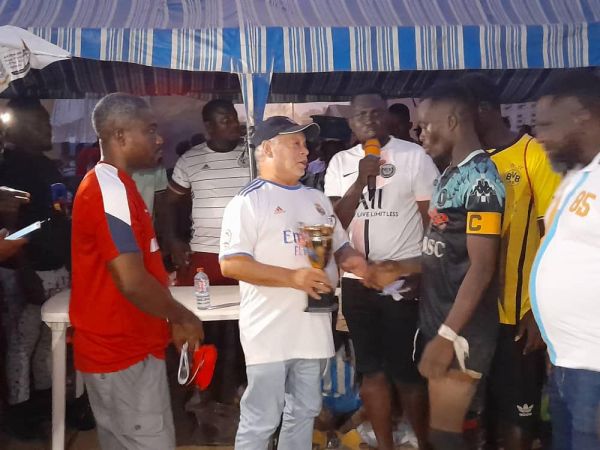 Narawa Mining Company, Akyem Nsuapimso – Osino in the Southern Fanteakwa Municipality of the Eastern Region, has ensured the communities in which they operate a peaceful coexistence and is committed to ensuring the fulfillment of its social cooperation responsibilities.

This statement was made during a three (3) day cross-community gala competition with other indoor games included dubbed “Narawa Xmas Gala”, sponsored by Narawa Mining Company and Yaks Roofing which saw sixteen football teams and dozens of individuals participate on the 17th, 18th and ended December 19th, 2021.

According to Nana Kofi Wusu Akuffo, public relations manager for the Narawa Mining Company, the motive behind the games is to bring the mining company closer to the communities in which it operates in order to promote peaceful coexistence.

“Every year, we hold this gala to bring the business closer to the communities in which we operate and to build good relationships with people as the business is located in twenty-six (communities). Over ninety ( 90) percent of our well-being depends on mining but at the mere mention of gold mining, people around you frown on it, hence the need to connect with them through these activities to make them understand and bring them closer. There was an argument between the chief and the queen when we arrived at the enclave but you saw it, the gala brought together all the factions on the ground, it is the harmony we need. ” Nana Kofi Wusu Akuffo said.

Nana Kofi Wusu Akuffo concluded that the peaceful atmosphere seen on the playground will carry over to their workplace, as the majority of their employees are from the communities in which they operate.

Mr. Paul Okran, director of Narawa Mining Company, who led their team, expressed satisfaction with the event and said that besides the health benefits of the event, local businesses were stimulated because traders from the community came to the field to sell.

He said Narawa has done a lot of cooperation in social responsibilities in surrounding communities, like building CHPS schools and precincts, and looks forward to doing more.

Mr. Paul Okran further said that Narawa as a company deplores conflicts and urges young people and all to embrace peace and unity for development.