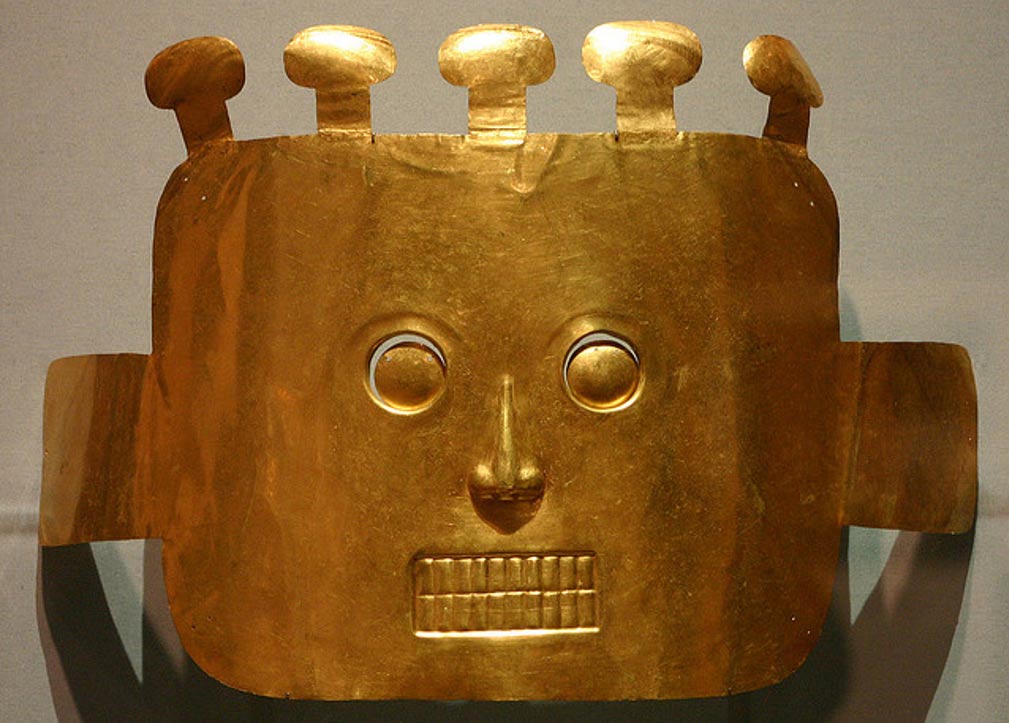 When a Colombian sugarcane plantation worker and his tractor plunged into a hole that had suddenly opened in the earth, the spectacular discovery buried underground would lead to a large-scale looting frenzy, killings and the destruction of ancient artifacts and tombs from a rich, mysterious, unknown culture.

This is the story of the Malagana Treasure.

In 1992, an employee of a sugar cane farm worked in the fields of Hacienda Malagana located in the municipality of Palmira, in the Cauca Valley in Colombia. The ground gave way, and the man and the machine fell into the hole. As the worker tried to resolve his situation, he noticed shiny, golden objects in the dirt. Upon closer inspection, he realized that he had found a treasure and did not tell anyone about it, choosing instead to hide the valuables for himself.

The man didn’t know it, but he had just removed priceless ancient gold artifacts from the burial graves and hypogeum of a previously unknown Colombian indigenous culture.

The employee sold all the items he could from the newly discovered graves, but his secret did not last long. When other employees and locals learned that there was treasure buried in the fields, word spread like wildfire and a frenzy of looting began. Between October and December 1992, around 5,000 people are said to have descended on Hacienda Malagana in what has been described as the â€œMalagana Gold Rushâ€. The hypogeum has been mercilessly and thoroughly looted by hordes of gold diggers, and at least one person is reported to have been murdered. Nearly four tonnes of pre-Columbian artifacts were removed from the site to be melted down or sold to collectors in what has been described with regret as the “greatest transport since the early Conquistadors”. Hundreds of graves have been destroyed in the process.

“Stylized feline nose set from Malagana 200BC-200AD as part of” The Spirit of Ancient Columbian Gold “exhibit. Wearing this large nose ring, a shaman has transformed into a jaguar. Powerful predators, jaguars symbolized authority and status. (David, Flickr / CC BY 2.0 )

It was not until January 1993 that the authorities were alerted to the looting of Malagana. Reportedly, journalists at the scene filmed the chaos and published photos in newspapers. Police at the scene were unable to contain or control the chaos, stop looters from fighting, or protect the site from widespread destruction.

It is not known how many irreplaceable artifacts were lost in private collections or were simply melted down for gold.

From March 1993, archaeologists from the Instituto Vallecaucano de Investigaciones CientÃ­ficas (INCIVA) and the Instituto Colombiano de AntropologÃ­a (ICAN) attempted to excavate the site, but the looters still interrupted the work and the situation. security remained difficult, so the search had to be postponed. . By 1994, the treasure hunters had given up and archaeologists were finally able to learn more about the mysterious culture.

Research has indicated that the dwelling site dates from between 300 BC and 300 AD.

As the cemetery site had been largely destroyed, researchers focused their attention on a residential area about 500 meters (1,640 feet) away.

Because the site was found under the sugar cane estate of the Hacienda Malagana, the cultural complex discovered underground and the Unknown People were so named. The Malagana people are one of the four societies that successively occupied the valley and formed the Calima culture (200 BC – 400 AD). The Calima culture included the Llamas, Yotoco, Sonso, and Malagana.

Calima cultured gold tweezers. Men in ancient Colombia used tweezers to pluck their faces. This elaborate pair may have been used in rituals or ceremonies. Simpler versions of these tweezers would have been used daily. Gold items were made in the ancient Americas for the exclusive use of an elite class of rulers, priests, and other nobles. Acquired by Henry Walters, 1910. ( Wikimedia Commons )

In â€œWomen in Ancient America: Second Edition,â€ authors Karen Olsen Bruhns and Karen E. Stothert write that the Malagana people prospered in their colony located in swamps and fertile farmland. The remaining ceramic artifacts and models in the culture’s tombs suggest to researchers that the Malagana lived in rectangular houses on stilts.

Possessing their own distinct iconographic style, the Malagana made fine ceramics, mostly white or terracotta in color. They made large bottles, double-spouted vessels and musical wind instruments, ocarinas. Their gold and silverware were clearly noteworthy judging by the reports of witnesses to looting and the artifacts now remaining in museums.

It belongs to a museum

The Museo del Oro in BogotÃ¡ reported having obtained some of the gold objects looted from Malagana as early as late 1992. Some 150 gold coins from Malagana were eventually acquired, with nearly 500 million pesos (US $ 300,000) paid. looters by the museum in order to preserve the artifacts. The move has been criticized by some as encouraging looting of sites and trafficking in artifacts. However, with the artifacts recovered and information from researchers, 29 of Malagana’s tombs from the hypogeum have been reconstructed and context established.

Other museums have also managed to recover some artifacts, if only by taking images of the objects to record the lost iconography of Malagana.

Unfortunately, looting at Hacienda Malagana has continued since the initial scramble in 1992 (albeit in reduced numbers), and cases of digging were reported as recently as 2012.

The sad reality of looting

In “Handbook of South American Archeology,” Helaine Silverman and William Isbell note with dismay that in Peru alone “more archaeological sites have been destroyed since World War II than in the first 400 years after the Spanish conquest. . And destruction is accelerating, whether caused by outright looting, economic development (eg, agricultural development, irrigation projects), or population resettlement.

Unfortunately, such looting and destruction continues today all over the world.

The cemetery and cultural artifacts may have been looted, but they are slowly being brought into museums and researchers are diligently preserving and protecting the cultural heritage of the ancient lost peoples of Malagana.

2015-08-14
Previous Post: “The prosperity of the Indus Valley civilization has been greatly contributed by the maritime trade in Saurashtra”
Next Post: Magma injection under the urban area of ​​Naples: a new mechanism for the volcanic unrest of 2012-2013 at the Campi Flegrei caldera