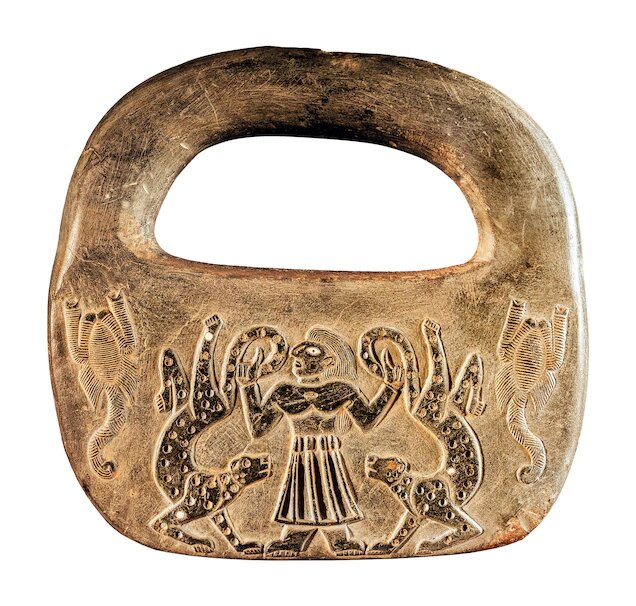 Jiroft: the story of how Iran became a cradle of civilization

TEHRAN – Until the very beginning of the 21st century, no one had dreamed that a refined and forgotten culture could emerge from the sands of a remote and arid region of south-eastern Iran.

The story began when heavy flooding swept away the topsoil from thousands of previously unknown graves in the Bronze Age cemetery at Jiroft. Tables of remarkable discoveries at Jiroft demanded a reassessment of an earlier interpretation, on the basis of which Mesopotamia was considered the cradle of civilization.

According to a National Geographic article, a flood of archaeological objects began to appear on the antiques market seemingly out of nowhere in 2001.

Here are edited excerpts from the article:

These extraordinary pieces presented a complex symbology of animals, both wild and domesticated, depicted fighting with each other or with human figures, humans always triumphant. There were beautifully done bucolic scenes of animals grazing in vast palm groves and architectural reproductions of temples or palaces.

Data from websites and auction houses selling these mysterious pieces was sparse and vague at best. Their origins were often listed as â€œCentral Asianâ€.

At first it was assumed that the coins were the work of expert counterfeiters, but as others hit the market in the following months, researchers began to speculate that they might be genuine, from a non-site. documented whose location was unknown to them. In 2002, others appeared on the market.

Iranian police solved the mystery later that year. A coordinated investigation led to the arrest of several traffickers and the confiscation of a treasure trove of artifacts. These items were being prepared for shipment from Tehran, Bandar ‘Abbas and Kerman to buyers around the world. Investigators revealed that most of these distinctive pieces can be traced to a location in the Halil River Valley, about 40 km south of Jiroft, a remote and peaceful town in southeast Iran, not far away. from the Persian Gulf.

But where do these mysterious artifacts come from? At the time, scholars knew of no excavation sites in the area, but when they took a closer look, they found a simple but surprising explanation. In early 2001, flooding caused the Halil River to overflow and erode the surrounding land.

Layers of sediment were washed away and the remains of an ancient cemetery were exposed. Locals and looters quickly recognized the importance of the find and moved to collect and sell the artefacts found.

The overall significance of the find became clearer after archaeologists made formal studies of the area and found that this undocumented culture dates back almost 5,000 years to the Bronze Age. The looters had ransacked thousands of graves in the necropolis, taking away artifacts and damaging the site, but archaeologists were determined to study what remained. They traveled from universities around the world to join an Iranian team to protect the exposed site as much as possible and to excavate nearby areas to learn more about this ancient culture and its people.

For several seasons, excavations near Jiroft began in February 2003, under the direction of Iranian archaeologist Yousef Madjidzadeh. Madjidzadeh’s team identified the main necropolis, which they named Mahtoutabad. Most of the initial finds and artefacts are believed to have come from this site despite the looting of grave goods prior to excavation. Nearly a mile west of the necropolis, archaeologists targeted for further study two large man-made mounds that rose above the plain.

About a mile apart, the two mounds were named Konar Sandal South and Konar Sandal North. They turned out to contain the remains of two large architectural ensembles. The northern mound included a building of worship, while in the southern one were the remains of a fortified citadel. At the foot of the mounds, buried under several feet of sediment, were the remains of smaller buildings. It is believed that the two mounds were once part of a unified urban settlement that stretched for several kilometers across the plateau.

Madjidzadeh’s preliminary conclusions from the partial data available made a great impression on the scientific community. Some researchers, including American archaeologist Oscar White Muscarella, have strongly questioned his findings, sparking furious academic debates. Critics feared that the initial looting of the site’s artifacts would make it difficult to accurately assess their age and authenticity.

Despite the controversies, work continued on the Iranian site for several seasons with visiting researchers from around the world, including American archaeologist Holly Pittman of the University of Pennsylvania. The first phase of excavation on the site lasted until 2007.

The initial image of the Jiroft civilization that existed has become clearer. Madjidzadeh published the team’s findings, which suggested that an urban center had been established at the Jiroft site as early as the end of the fifth millennium BCE. His optimistic conclusion said that â€œthe Jiroft region. . . was a major urban occupation in the region during the third millennium BCE. Its center was in the valley of the Halil river where large sites of monumental architecture, areas of important artisanal production, domestic quarters and vast extramural cemeteries dominated the landscape.

Archaeologists have found distinctive objects – some practical, some decorative, and some sacred – which often featured carved semi-precious stones such as calcite, chlorite, obsidian, and lapis lazuli. The citizens of this city appear to have maintained close contact with the cities of Mesopotamia, the region between the Tigris and Euphrates (roughly coinciding with present-day Iraq). Careful excavations of Konar Sandal South have revealed that the citadel was once surrounded by a monumental brick wall and had several rooms which, through radiocarbon analysis, have been dated to between 2500 and 2200 BC.

Excavations at the Jiroft site were halted for seven years and resumed in 2014 as Iranian archaeologists returned to the site. Researchers from Italy, France, Germany and other countries participated in the new excavations, which uncovered even more detailed information about Jiroft’s Bronze Age people.

Archaeologists were delighted to discover the intricacy and beauty of the works of art found at the Jiroft site. The decorative iconography present on hundreds of vessels is rich in expertly executed symbolism and shows remarkable similarities with the iconography associated with the Mesopotamian tradition. Images of scorpions found at Jiroft echo the scorpion-men depicted in the royal necropolis of Ur (mid-third millennium BC). Jiroft’s bull-men are reminiscent of the Enkidu bull-man from the Akkadian epic of Gilgamesh. The parallels are so pronounced that it is theorized that the two cultures could share a common cultural heritage.

In one of the entrances to the citadel of Konar Sandal South, scholars found a fragment of a fired clay tablet bearing an inscription. In another location, about 500 feet north, three more tablets bearing texts written in two different writing systems were found. Whoever these people were, they had a writing system. One of them seems similar to the so-called linear Elamite, a script used in the cities of the kingdom of Elam, on the border with Mesopotamia. The other handwriting was geometric in shape and had never been seen before. The obvious inference from the two findings is that Jiroft’s civilization was literate.

In 2003, after examining the huge collection of confiscated archaeological finds, Madjidzadeh, the director of operations, came up with an intriguing hypothesis. Based on his observations of the site and a study of ancient Mesopotamian cuneiform texts, Majidzadeh believes that the Jiroft civilization is Aratta, a land that has been praised for its wealth in many Sumerian poems. An ancient text describes a conflict between Aratta and the Mesopotamian city of Uruk. In the story, Aratta is a vibrant place: “the ramparts are in green lapis lazuli, its walls and its imposing bricks are bright red, their clay brick is made of tin dug in the mountains”.

Madjidzadeh emphasizes the geographical position of the site surrounded by mountains, the abundance of semi-precious stones and the high degree of civilization as factors in favor of an Aratta identification. Skeptics criticize Madjidzadeh’s theory as lacking solid evidence. There is no documentary evidence to suggest that Aratta existed anywhere other than in Sumerian poems and that Aratta was just a myth of the Bronze Age.

Other scholars have speculated that the civilization near Jiroft might correspond to the ancient kingdom of Marhasi. This theory has some textual support. First, there are the inscriptions of the kings of Akkad, a Mesopotamian empire, which describe their glorious Akkadian exploits in the fight against a powerful state in the Iranian highlands. In one of these texts, the epilogue of the conflict is recounted in detail: â€œRimush [King of Akkad] defeated Abalgamash, king of Marhasi in battle. . . When he conquered Elam and Marhasi, he took 30 gold mines, 3,600 silver mines and 300 male and female slaves. There is strong evidence that the city of Akkad existed between 2350 and 2200 BC. Since Marhasi was Akkad’s contemporary, Marhasi can also be dated to this time, which matches data from Jiroft’s excavation sites. Unlike Marhasi, Aratta cannot be identified with a specific period.

A complex civilization of the Bronze Age

No one had ever dreamed that from the sands of such a remote and arid region, considered by many to be an unlikely place for the development of a complex civilization, a refined culture could emerge. Since excavations began almost two decades ago, many discoveries, once carefully analyzed, will allow Jiroft to be placed in its proper historical perspective. Since 1869, when the remains of Sumerian culture were discovered, Mesopotamia has been considered the cradle of civilization. But Jiroft’s remarkable discoveries demanded a reassessment of this interpretation.

2021-07-17
Previous Post: Breaking the myth of Easter Island: there was no collapse of civilization
Next Post: Athens to transform Syntagma Square into a sustainable urban area – Greek City Times