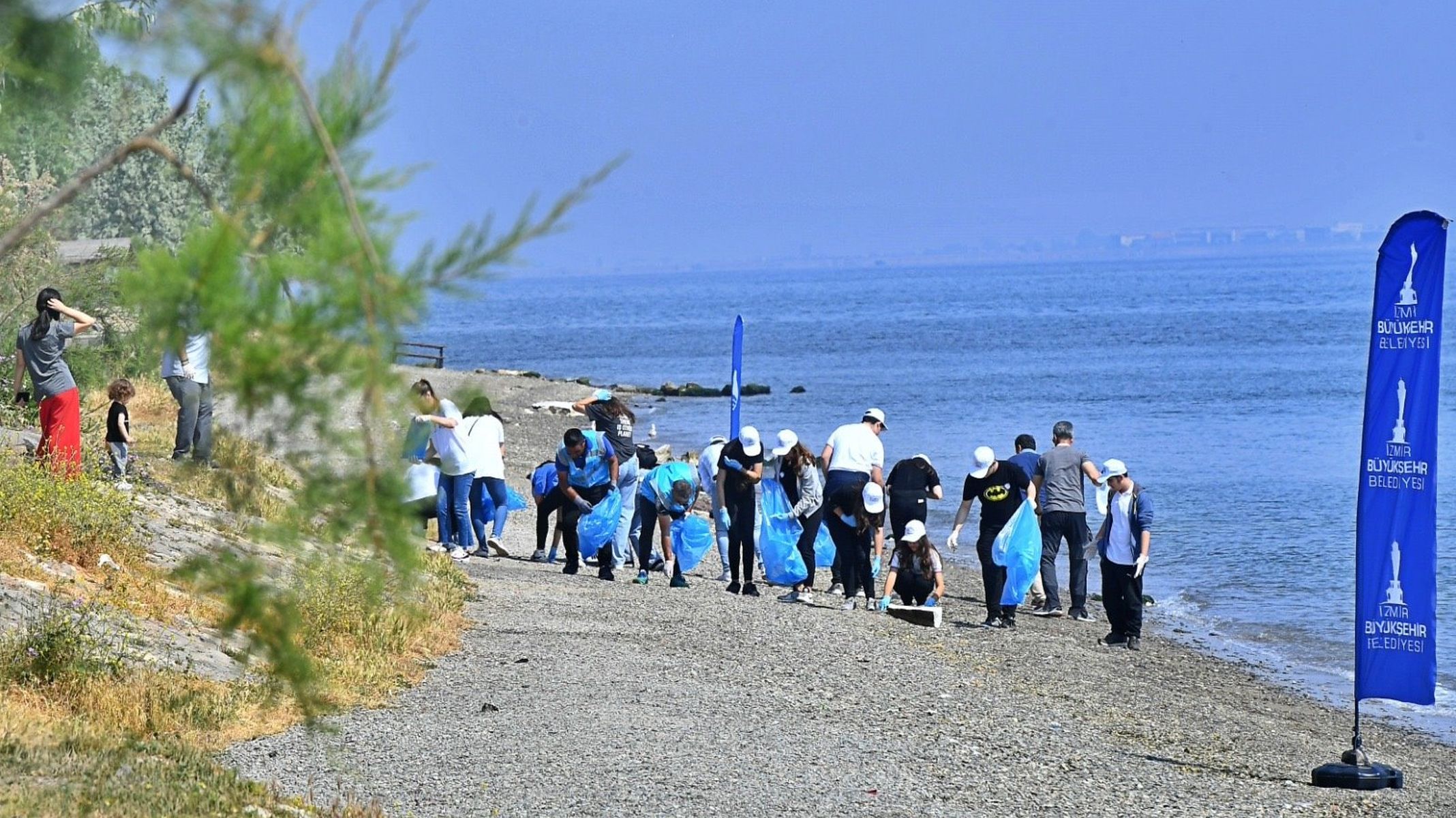 Izmir Metropolitan Municipality participated in the marine litter monitoring program launched by the initiative of the European Environment Agency. On the first day of the program, the waste accumulated on the hundred-meter shoreline of İnciraltı Urban Forest in Balçova was collected. The waste collected will be classified into plastics, wood, metals. Then it will be examined what waste is generated on the coasts and in what quantity.

The Blue Flag Coordination Unit, under the Marine Protection Directorate of Izmir Metropolitan Municipality, has added a new one to its work with the slogan “The color of the beaches is blue”. The unit participated in the Marine Litter Monitoring Program (MLW) launched by the European Environment Agency Initiative and conducted by the Turkish Environmental Education Foundation (TÜRKÇEV) and Adnan High School Menderes Anatolian. The project started in the urban forest of İnciraltı in Balçova, very visited by the inhabitants of Izmir. Through this program, the movement of waste on the coasts and in the Gulf will be tracked and classified.

The goal is not just to pick up trash

Doğan Karataş, regional coordinator of the Turkish Environmental Education Foundation, said the study was conducted at 11 points in Turkey for about a year and a half. Stating that marine litter and plastics are important pillars of the litter problem, Doğan Karataş said, “Our goal is to produce a scientific study. This is not a garbage collection event. It is a fully scientific study, the data of which is analyzed and the results are reported. We will categorize the waste that we collect here one by one into tires, wood, metal materials and we will follow the movements of these wastes especially in our country and locally in the Gulf for a year.

“The biggest problem in the world is plastics”

Stating that it is significant that the Izmir Metropolitan Municipality is involved in the work, Karataş said, “The biggest problem in the world is plastic. We have also found that most of the waste we collect is made up of plastics. Plastics do not dissolve easily in nature. Today there is also the problem of micro plastic, which affects our table. We want to draw attention to these. Here we capture both daily use waste and marine litter. Through this work we will send the message to people that garbage does not happen by itself, it is something that it produces.

Özlem Görken, head of the marine protection branch of the climate change control and environmental protection department, said he was happy to contribute to the project and said: “The waste that will be collected on the sea ​​coast will be classified. We will focus on the amount of waste that forms on the coasts. We are talking about waste of human origin. We are constantly working to keep our bay and our shores clean. We will continue our efforts to raise awareness and create a sustainable environment and marine environment.

“Most of the cigarette butts have been found”

Sema Uzun Güneş, who collects litter that hits the shoreline of İnciraltı urban forest, said, “We collected the most cigarette butts. There are also pieces of glass, plastics. Our coasts and our seas are very precious. Know their value. Let’s not cause irreversible pollution,” he said.

“We are doing the greatest harm”

Adnan Menderes Anatolian High School, Sıla Alper said that people are constantly polluting nature and said, “The seas are polluted. We must prevent this pollution now. We also collect garbage here. Even if everyone picks up trash cans in front of their homes, that’s a lot. kazanwe race. We have no other living space, yet people despise everything. We complain about a lot of things, but we do the most damage. We don’t leave good things for future generations. We will have children, if I can live in this world right now, we have to give them a nice space. We collect a lot of crocuses. It would be much better if you put them in a bag and throw them in the trash instead of throwing them on the floor. “We do a lot of damage in nature,” he said.

After the whole working day, the waste was classified and reported. The program will continue for one year in the urban forest of İnciraltı.