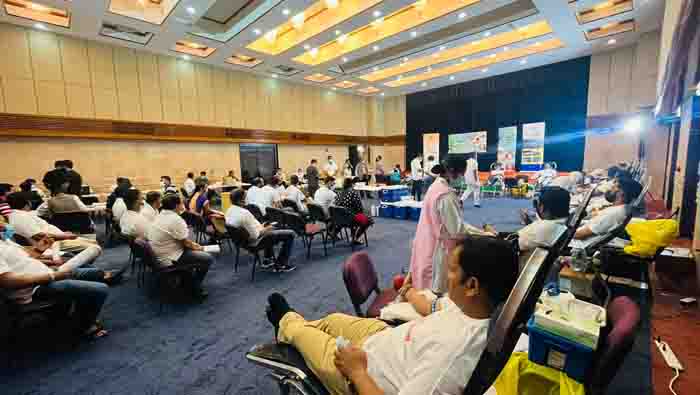 The “Mega Blood Donation Drive” was inaugurated on April 2.

Muscat: The Indian community donated a record 1,327 units of blood during the ‘Mega Blood Donation Drive’ organized during the ‘Community Service Fortnight’ or ‘Sewa Utsav’ by the Embassy of India.

The ‘Sewa Utsav’ was organized by the Embassy with the support of the Indian community from March 31 to April 16 to commemorate 75 years of Indian independence.

The “Mega Blood Donation Drive” was inaugurated on April 2, 2022 by Ahmed Mohammed Ahmed al Humaidi, President of Muscat Municipality and held in several cities in Oman with the generous support of the Oman Ministry of Health .

The collection was organized at the premises of the Embassy and the Bausher Blood Bank in Muscat on April 2 and from April 9 to 15, 2022.

The branches of the Indian Social Club (ISC) in Salalah, Sohar and Sur also organized fundraisers in the respective towns, which saw the enthusiastic participation of members of the Indian community residing there.

Ambassador Amit Narang praised the overwhelming support received from the Indian community in collecting units of blood to support the work of blood banks in Oman.

The Ambassador said: “This blood donation campaign reflects the core Indian thought of ‘Sarve Bhavantu Sukhinah’ i.e. working for the welfare of others and is in line with the pious spirit service of the holy month of Ramadan”.

He added that the extraordinary effort of the Indian community for blood donation shows their love for their Omani brothers and sisters and will go a long way in strengthening the Indo-Omani friendship.