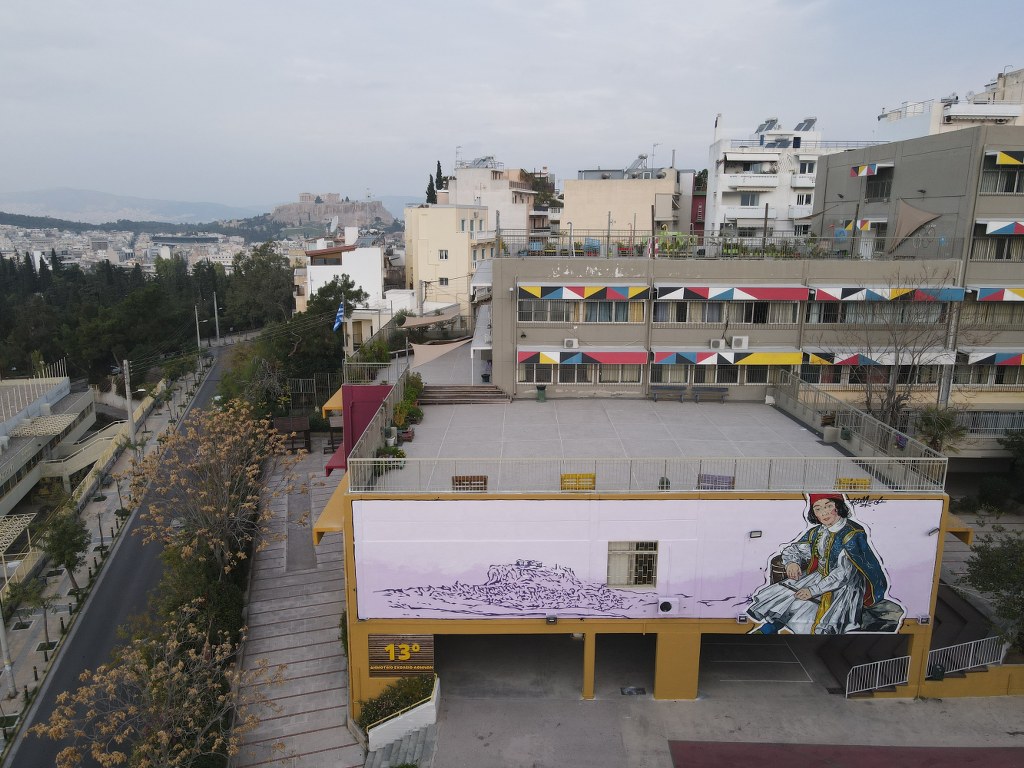 Impressive murals in schools and neighborhoods in Athens ATHENS 9.84

Two other impressive large-scale murals, give color and breath to the school buildings of Athens, thus completing the program of four public murals entitled: “From the roots to the sky”, implemented by the Municipality of Athens and the Urban Act, with the participation of prominent Street Art artists.

The Mets school mural, inspired by the work of German painter Johann Georg Christian Perlberg, titled “The Young Drummer of Messolonghi” (or “The Drums of the War of Independence”), is in the courtyard of the 13th primary. School of Athens. by street artist SAME84.

In the 3rd consecutive mural, as part of the Athens Municipality‘s public mural program, the artist used a mixed technique of aerosol and acrylic paint, in order to freely render the work on an impressive scale, as if she presented it on Canvas. “Through my work, I wanted to express the revolution, as I would like it to happen even today: A young person to give his rhythm”, specifies the author in a short message.

The ’21 Fighters’ Pantheon at the 133rd Athens Primary School

The ‘Pantheon’ mural of Fighters from ’21 is a composition inspired by three of the most important protagonists of the Greek Revolution: Laskarina Bouboulina, Theodoros Kolokotronis and Konstantinos Kanaris. These heroic figures inspired the street artist GOSPEL and are represented in an abstract way and in vivid colors on a wall of the 133rd primary school, in Kypseli.

The choice of Konstantinos Kanaris was not accidental, as he, who has been the country’s prime minister five times, has lived part of his life in Kypseli. This particular fresco, which pays homage to the hero of ’21, is framed with decorative elements referring to his action, such as the cannon and the ship.

The program for 2021 was implemented on the walls of four school buildings in Athens and was dedicated to the “anniversary actions 1821 – 2021”. The artists were inspired by important personalities, who stood out and whose works and actions contributed to the cohesion, to the hope, but also to the future development of the country.

It is recalled that the first mural was painted by the Greek street artist KEZ at the 104th Primary School in Athens and was inspired by the well-known work â€œErotokritos and Aretousaâ€ by our popular painter Theofilos. In the second mural, which adorns the 18th Unified High School in Athens, the inspiration for artist Leonidas Giannakopoulos came from the words of Andreas Kalvos, which are included in the ode “In Samon”.

The program of public murals, implemented by the Municipality of Athens, includes another mural inspired by 1821, that of the street artist Cacao Rocks. The well-known artist painted an impressive portrait of the Philhellene poet Lord Byron, as part of the highlighting of personalities in the field of intellect and literature, whose actions helped spread the struggle for the freedom of the Greeks. It is a -great- fresco which was completed in December 2021 and adorns the wall of a building at the junction of Tombazi and Leocharous streets, in the Psyrri district.

Cacao Rocks, referring to his work, stressed: â€œI thank the Municipality of Athens for the inspiration and contribution to the implementation of this project. With this move, we are creating a modern monument for Philhellenism and we honor the personality of Lord Byron, who gave his life for Greece and freedom â€.

To create his fresco, the artist used a style reminiscent of the painting of the Modernists of the last century, leaving the documentary part of the composition on the second level and creating a pop painting version of the bust of Lord Byron.

â€œThe Municipality of Athens will continue to connect contemporary art to the urban landscape, implementing a dynamic program of public murals in the New Year.â€ Our goal is through this â€œopenâ€ to all forms of art of giving more color, elegance and quality public space, by emphasizing not only the center, but also the districts of our city â€, underlines in a press release the Mayor of Athens Costas Bakoyannis .

The program implemented by Culture is Athens is part of the three-year plan of the Municipality of Athens, with the aim of revalorizing, promoting and integrating the cultural fabric of Athens, but also the practical support of artists and employees of the Culture branch. The design and supervision of the program, in which a total of seven murals were produced, was entrusted to the art historian and the mayor’s adviser in the field of culture, Katerina Koskina.

This year, the mural fresco program is extended to private buildings, institutions and institutions. Already, The Municipality of Athens has sent a relevant invitation, by which it invites those who are interested, to propose their own wall for the creation of murals by sending the address of the property, the photo of the surface of the proposed wall, as well as their contact details to the e-mail address: [email protected]

It should be noted that the public murals were made with the support of the Greek colors Vechro and Flame and with the communication sponsor LIFO.