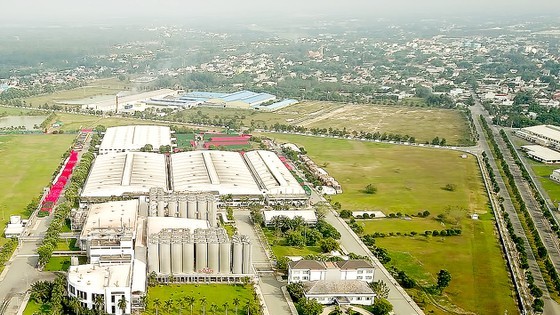 By: Jason M. Simon
In: Urban area
With: 0 Comments
The Northwestern Cu Chi Industrial Park will create many jobs for the local population. (Photo: SGGP)
More than ten years of hiatus

Chau Nguyen owns more than 2 hectares of land in Tan Thong Hoi commune in Cu Chi district in the planning of northwest urban area. Due to planning, for almost ten years he could only grow orchids and breed fish. This job does not suit him, so the profit is not high. In the meantime, if he sells his land, the price of the land is not high because it is in the development of the North-West Urban Area.

Chau Nguyen is one of thousands of households that have been embroiled in the ongoing planning of the northwest urban area, which has been going on for over a decade. According to the Decision n ° 24 / QD-TTg of January 6, 2010, of the Prime Minister approving the general urban planning of HCMC, the North-West Urban Area will be a secondary direction, comprising five municipalities and a city, with an area of 6000 hectares. . According to the first statistics, the whole planned area had about 6,000 households that need to be completely cleaned. In 2016, city leaders adjusted planning in the direction of stabilizing existing residential areas.

In April this year, reporting to the HCMC People’s Committee, Mr. Phan Ngoc Phuc, deputy director of the Planning and Architecture Department, said 11 projects of the 1: 2000 scale zoning plan had been approved, but no investor was available. . After that, following the direction of the city party committee and the municipal people’s committee on the review of unachievable planning, the planning and architecture department reviewed and reported to the city. The planning adjustment was approved by the Municipal People’s Committee to adjust the task of the zoning plan to 1/5000 scale in February 2020. At present, the adjustment project is being prepared and devaluation. The department coordinated with the North West Urban Area Management Board, Cu Chi District People’s Committee and relevant units to remove difficulties and obstacles in order to quickly complete the project planning to be submitted to the HCMC People’s Committee for consideration.

From an investment perspective, the Northwestern urban area once attracted many investors. Fourteen years ago, the appearance of Malaysian group Berjaya, with a popular investment combo in HCMC, impressed domestic investors. The group has launched projects to build a financial center in District 10 and a 900 ha university town in Hoc Mon district, with a total investment of $ 3.5 billion. In addition, this place has also attracted the attention of large domestic and foreign companies. Unfortunately, the global economic crisis occurred in 2008, due to difficulties, all investors withdrew.

Recently, a comprehensive review and appraisal report of more than ten years of implementation of the general planning of HCMC by the Planning and Construction Institute of HCMC shows that the financing of the construction of the urban area of ​​the northwest was extremely slow; the infrastructure system was not developed synchronously; The connection with the city center is based only on the national road 22, so it is difficult to call for investments. The north center of the north-western urban area (about 500 ha) and the sub-center of the Hoc Mon district (50 ha) are mainly located in the existing residential area and have had no investors. The completed urban and residential planning projects are extremely slow or have not been implemented, such as Tan Thoi Nhi Urban Residential Area, Tan Hiep Urban Residential Area, University Town and Safari Park of Saigon.

Usually, the urbanization process here unfolds like an oil spill. Residential areas formed in a fragmented and uncontrollable manner and lacked infrastructure.

According to the assessment of economic and urban experts, the biggest obstacle facing the development of the North West urban area is traffic. The Planning and Construction Institute of HCMC asserted that the Northern Development Corridor is entirely dependent on the north-south artery, National Road 22. However, National Road 22 is overcrowded and lacks investment resources for it. connect with surrounding development directions, such as Binh Duong and Tay Ninh Provinces. The An Suong – Moc Bai road, also known as the parallel road to National Road 22 to share the traffic pressure, has not yet started construction.

From the planning point of view, according to Mr. Hoang Minh Tri, former director of the HCMC Building Planning and Construction Institute, at present, the northwest urban area has been placed in a completely new context, which is extremely convenient to attract investment. . Firstly, the HCMC – Moc Bai highway will soon be invested and completed and will become the main driver for the development of the North West urban area in particular and the region in general, such as Binh Duong and Tay Ninh provinces, and will be will connect to Cambodia. Second, the Ben Thanh – Tham Luong No.2 metro line has practically completed mine clearance and is speeding up the implementation process. At the same time, the connection plan from Tham Luong to Cu Chi has also been clearly determined to be included in the implementation plan. This metro line is expected to connect to the highway to Tay Ninh province. Thus, these routes should ease the traffic tension in the city center, the section going from Tan Son Nhat Airport to the northern districts and neighboring provinces. Thanks to this, the circulation of labor and goods between regions will be facilitated. Above all, with increasingly severe climate change, HCMC urban development must have a concise overview of this area, including a high geological base and hard soil, which will not be affected by floods and high tides.

According to architect Khuong Van Muoi, HCMC Architects Association, while a heavily invested infrastructure system, good geology, and an ideal location for regional and international connections are important, it is still not enough. The call for investment must be launched by the government. This will be the deciding factor in ensuring the success of the investment attraction for the North West urban area. When the government presents the project and holds conferences and seminars to appeal for domestic and foreign investment, investors can clearly see the importance of the project in the future. At the same time, it is also a message to assure investors of the government’s determination in the construction of the North West Urban Area. This has been proven by the new urban areas of Phu My Hung and Thu Thiem. The government invests in infrastructure, such as roads, bridges and underground tunnels, and cleans up sites, and investors are only doing their part.