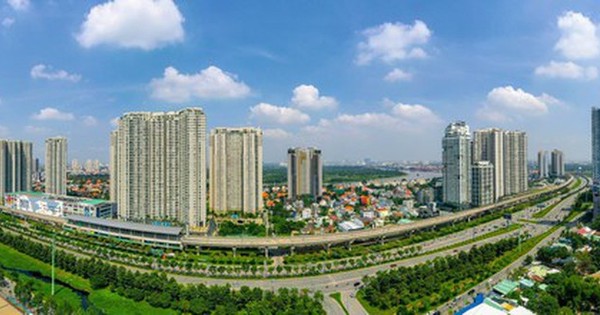 The connection of Thu Duc Town, Bien Hoa Town in Dong Nai Province and Ba Ria-Vung Tau Province creating a chain of urban areas plays a key role in motivating to break inertia and the obstacles in the northeast of the southeast region arose several generations ago. .

The 31 km long Bien Hoa highway, now known as the Hanoi highway, was built in 1957-1961, with the aim of connecting Saigon, now HCMC, to the industrial hub of Bien Hoa. Before 1975, a few constructions were established along the road, such as universities, cement factories, textile manufacturers and ports.

In 1990, Japanese and Korean experts suggested the establishment of the urban chain and widened the Hanoi highway from 200 to 500 m on each side.

The dream of setting up the chain of agglomerations gradually came true after more than 60 years.

The government approved the extension of the city’s first metro line to neighboring Binh Duong and Dong Nai provinces.

As a result, the additional lines of about 2 km and 5 km will be constructed from Suoi Tien Station to Binh Duong and Vung Tau intersection to Dong Nai respectively.

The metro line, as the backbone of the urban chain, is expected to come into service at the end of 2021. The real estate market and service works along the metro route have become livelier.

Long Thanh Airport in Dong Nai Province has become an attractive destination for local and foreign investors, such as Novaland, Nam Long, Phuc Khang and others from South Korea, Singapore and Japan.

Construction work on Long Thanh International Airport began on January 5. The first phase of the project has a capacity of 25 million passengers and 1.2 million tonnes of freight per year. The airport with an area of â€‹â€‹approximately 5,000 hectares is designed to serve 100 million passengers and 5 tonnes of freight per year. It is one of the key national projects, aimed at developing the aviation industry and connecting Vietnam to the world. Modern urban areas near the new airport will be established with an estimated population of 300,000 to 500,000.

The HCMC – Long Thanh – Dau Giay highway is part of Vietnam’s North-South highway, connecting HCMC to Dong Nai province. With a length of 56 km, the road begins at the An Phu intersection in Thu Duc town and ends at Dau Giay in Thong Nhat district of Dong Nai province.

The investment plan to widen the existing four-lane highway into an 8 to 12 lane highway to meet the increased travel demand has been approved by the government. It is expected to become a blood route carrying passengers and goods as well as connecting river ports, airports and roads.

In addition, the creation of the city of Thu Duc is a strategic breakthrough for HCMC. The new city will be developed into an innovation hub for industry, scientific research and services. It will be designed and built in compliance with urban planning, quality of life and quality of service standards to ensure the development of modern industries and meet the demands of residents and businesses. The first city in the country using the city-within-city model will help the eastern region of HCMC become a central element in the economic development of the South Pole and the South Key Economic Region. After its creation, the city of Thu Duc is expected to donate a third of the city’s economy and contribute 7% of the country’s GDP.

The city of Thu Duc extending over more than 211 km2 and sheltering more than one million inhabitants will contribute to the formation of the chain of agglomerations which covers an area of â€‹â€‹500 km2 and has nearly 2 million inhabitants. It is expected to be the hottest development destination in the country by 2050.

2021-02-15
Previous Post: INDIANS A Brief History of a Civilization by Namit Arora: an excerpt
Next Post: ‘Civilization VI’ will let you befriend barbarians in its next free update