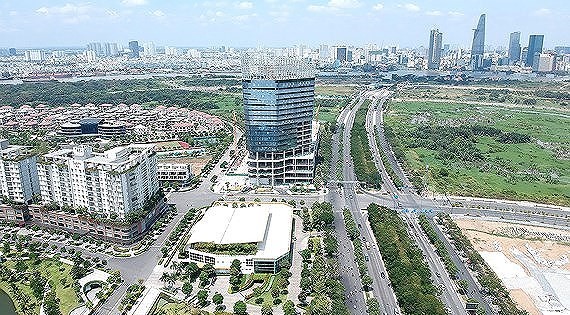 According to the announcement, the People’s Committee and agencies in Ho Chi Minh City have committed violations of land use planning and management while investing in the new urban area of â€‹â€‹Thu Thiem.

Specifically, the committee issued regulations on insufficient and untimely construction management of the new urban area, insufficiently and incorrectly calculated land use charges to make payment for BT (Build-Transfer ).

The entire 221.68 hectare land fund in Thu Thiem New Urban Area was established with the state budget, but the Town People’s Committee mainly used the land fund to pay reciprocal capital for them. BT (Build-Transfer) technical infrastructure projects for which the investors have been designated. Thus, the committee violated the regulations on auctions and land use management for failing to organize tenders for projects and allocate land and collect land use fees without paying the fees. auction the land use right.

In addition, the Government Inspectorate said that the committee did not follow the tendering rules when approving the designation of the Dai Quang Minh Joint Stock Company as the investor of the BT construction project. four main roads in the new urban area of â€‹â€‹Thu Thiem. The committee did not ask the investor to make a written proposal, to estimate the company’s experience in the design, construction, operation and management of projects as well as its financial capacity.

In addition, the City People’s Committee approved the Four Roads Construction Project with a total investment capital of VND 12.18 trillion ($ 522.53 million) but did not consult the relevant agencies.

Likewise, the City People’s Committee on its own volition changed the contractor of the Thu Thiem 2 Bridge BT project and the design of the four-lane to six-lane bridge without notifying higher authorities, damaging the state budget. . He also put forward an unsuitable construction method for the BT infrastructure project in the northern residential area.

The Government Inspectorate proposed to the Prime Minister to require the Ministry of Natural Resources and the Environment to coordinate with the Ministry of Finance to issue documents falling within their competence or to consult the government on the issue of documents to improve regulations to calculate land use charges and land use. fair value suitably, objectively and correctly and harmonize benefits between state and business.

The Ministry of Finance is expected to soon provide specific guidance on the use of own land funds and report to the Prime Minister to make payment for BT projects in general and the new urban area of â€‹â€‹Thu Thiem in particular.

It was proposed to the City People’s Committee to establish a working group to coordinate with the relevant ministries and agencies and the Government Inspectorate to review the changes to the detailed plan in the projects that have been implemented, including including the residential area on the south side of Mai Chi Tho Street. They should scrutinize projects with completed land allocations to recalculate the value of the land use right and avoid state budget losses.

The city is expected to inspect projects with investment policies or contracts but the land has not been allocated to investors to hold land use rights auctions or tenders to choose investors.

The Government Inspectorate said it would transfer the finding to the Central Inspection Commission to consider dealing with the persons and organizations under the management of the Politburo and the Secretariat of the Communist Party of Vietnam Central Committee for the relevant violations. .

Before December 31, 2019, violations will be transferred to the investigating agency unless they are remedied.

The remaining project investor with 1,330 apartments changed its relocation target to commercial housing and transferred 1,122 out of 1,228 apartments to residents. The Town’s People’s Committee liquidated the contract to build the resettlement area without the Prime Minister’s approval of land allocation and which does not grant any regulations.

The inspection of the Ministry of Construction and the National Audit Agency will further inspect the 38.4 hectare resettlement area in the new urban area of â€‹â€‹Thu Thiem and give their conclusion.

2019-06-27
Previous Post: Sunnei will present its collection in a requalified urban area – WWD
Next Post: Early DNA from this ancient civilization reveals the ancestry of modern South Asians