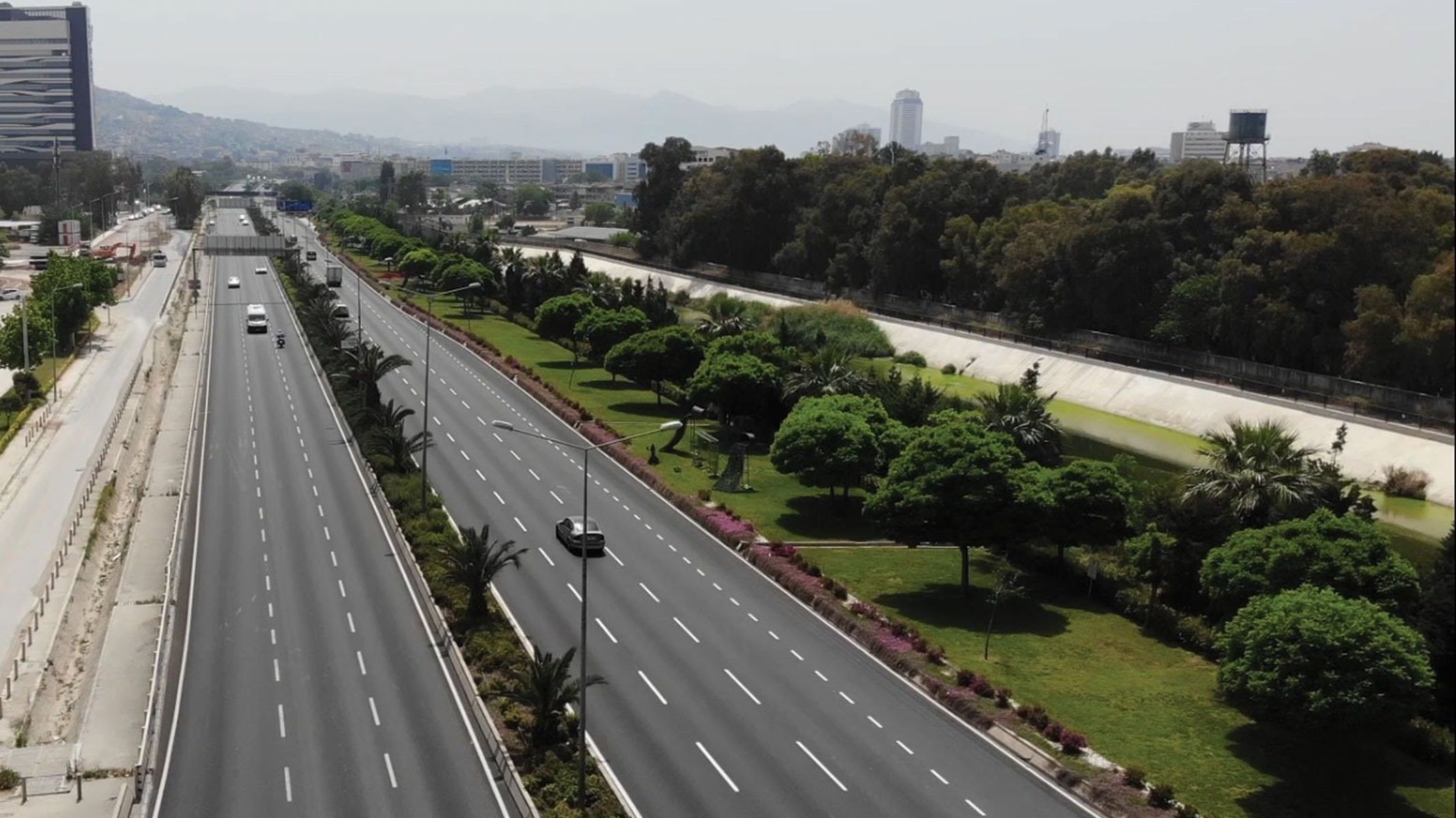 Investments have not slowed down in Izmir, which has seen the century’s biggest epidemic, earthquake and flood. The Izmir Metropolitan Municipality has invested 3 billion 730,000 lira over the past three years, from opening new roads to pedestrian crossings, especially asphalt, flat roads and junction facilities, to renew the city ​​roads and provide comfortable transportation.

Izmir Metropolitan Municipality has carried out major works over the past three years to ease traffic flow and provide safe and comfortable transportation. Investments have not slowed down in Izmir, which has seen the century’s biggest epidemic, earthquake and flood. Izmir Metropolitan Municipality Scientific Affairs Department and İZBETON teams continued their work with great devotion, from the main arteries of the city to the most remote village roads.

2.7 billion was spent on asphalt, surfacing and parquet works

A new road with a width of 8 meters and a length of 72 kilometers has been opened. BayraklıAs part of the works carried out on the connection between 1848th Street and Yeni Girne Street in , a new development road has been opened in the area. The connection of Lale and Çaldıran districts to Yeşildere Street has been ensured with the bridge built in Vezirağa area in Konak and a total of 600 meters of connecting roads. The closed part of 8780/1 street in Ata Sanayi in Çiğli district, 700 meters long, was opened by the scientific affairs teams and the road was connected to 8855 street. Thanks to these works, a connection was established between the region and Anadolu Caddesi, Evka-5 and the Atatürk Organized Industrial Zone. An in-depth study was carried out at the Nilüfer crossroads in the Bornova Naldöken district. A new construction road of about 1281 meters was opened on 19/400 Street between the junction and Cengizhan Street. With this road, the region’s 4th industry was connected to Ankara Street and the highway. Murselpaşa Boulevard. Karşıyaka – He opened new zoning roads in the area where the hospital is located towards Bornova. An open parking lot for 4 thousand 143 vehicles was built.

The era of cycling

Turning the Pandemic Process into an Opportunity by Department of Transport and Scientific Affairs of Izmir Metropolitan Municipality, Martyr Nevres, Vasıf Çınar, 2. Kordon and Pleven Boulevard, Narlıdere, between Narlıdere Center and Sahilevleri Cycle Path , side road of Yeşildere Street, Şirinyer – Between Basmane, on Sevgi Yolu and Uğur Mumcu Street in Dikili, on Rıza Erten Street in Çeşme, Karşıyaka About 1671 kilometers of cycle paths have been put into operation on the Bostanlı stream side, from the side of Cheesecioğlu Stream, Halkpark and 27th Street, Talatpaşa Boulevard and Cumhuriyet Boulevard in Konak.

Connection to Food Bazaar from side road of Mürselpaşa Boulevard, Bayraklı Traffic was relieved by making arrangements at Soğukkuyu, Konak Vezirağa, Cigli Ata Sanayi and Bornova Nilüfer Street. The metropolis has made curfews an opportunity in terms of road repair work during a pandemic. In this context, Altınyol, Yeşildere Street, Mithatpaşa Street, Gaziemir Akçay Street, Mürselpaşa Boulevard and the surroundings of Kültürpark, which are one of the most important thoroughfares in Izmir and have not been in operation for years, have been completely renovated.

Bus station viaduct completed, Buca tunnel started
2 overpasses, 2 highway underpasses and an overpass, located in the first phase of the Buca Tunnel and Viaduct Project which will directly connect Izmir Intercity Bus Station to the city center, have been completed with an investment of 154 million read. With the construction of the tunnel worth 559 million lira, the construction of 2 underpasses, 4 culverts, 4 intersections, 1 overpass and wall constructions in the third and fourth stages of the project began. The tunnel will facilitate transport from Konak to the intercity bus station with the viaducts that will be put into service in the coming months. The total length of the project, which will breathe new life into urban traffic, will reach 7.1 kilometers.

Izmir Metropolitan Municipality is constructing new overpasses to provide safe transport for cyclists, disabled people and pedestrians who want to cross the street with fast and heavy traffic, taking into account the demands of citizens. The Martyr Er Altan Yenil pedestrian overpass on Konak Mürselpaşa Boulevard has been renewed. To Buca Doğuş Street, Karşıyaka A new overpass was built in Yalı District, Gaziemir Aktepe and Buca 23 Nisan Primary School. The Göztepe Martyr Kerem Oğuz Erbay pedestrian overpass is under renovation.

With an investment of 400 million lira, vehicular and pedestrian bridges which were destroyed by rains over nearly 70 rivers in many districts are being renovated, and safe and comfortable transportation is being provided to citizens . Over the past 3 years, 3 road bridges and 13 culverts suitable for vehicle passage have been built over the creek. Work on 2 highway bridges, 2 culverts and 2 pedestrian overpasses continues. Torbalı Muscovite Stream Road Bridge, Dikili Bademli Neighborhood Road Bridge and Vezirağa Road Bridge over Yeşildere have been completed. A road bridge was built on the İZBAN line in Menemen Seyrekköy district, and the connection between the İzmir-Çanakkale highway and agricultural lands was ensured. 13 culvert bridges, in particular Gaziemir, Karabağlar, Balçova, Menderes and Urla, have been adapted for the passage of vehicles. Road bridges in Menemen Hasanlar and Bergama Fevzipaşa district, 2 pedestrian bridges in Seferihisar and a culvert in Urla and Karabağlar continue. Renovation works of 9 highway bridges in 14 districts have also started.

The emergency solution teams, formed with the vision of “fair and equal well-being” of the mayor of the metropolis of Izmir, Tunç Soyer, worked in 16 points in 148 districts of Konak, Buca, Karabağlar and Bornova . Listening to the demands of citizens and leaders, issues such as intersection layout, roadway, stream cleaning, paving of key cobblestones, parking lot layout, rubble cleaning were urgently resolved . Work continues at 20 addresses.

The Mavişehir Coastal Fortification Project has been completed with an investment of 37 million Lira, and the flooding in Mavişehir due to the rising sea has come to an end. As part of the works, 4 kilometers of concrete in water were produced 2.2 meters below the ground in order to prevent the passage of sea water under the ground; It was intended to protect the area from the effect of the waves of the rock fortification, which was built 160 centimeters above sea level in the front part. The region’s infrastructure has been reinforced so that similar problems do not happen again in Altınyol Street, which was flooded and closed to traffic during the flood disaster.

2022-05-14
Previous Post: Meeting in Killaloe to consider affordable housing in the area
Next Post: Drug-related crimes keep the Ecuadorian community gripped by fear