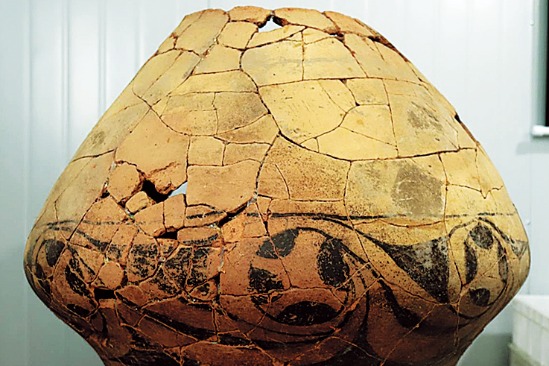 Archaeological ruins some 5,000 years old on the Loess Plateau can provide crucial clues to the beginnings of Chinese civilization.

New archaeological excavations this year at the Nanzuo heritage site in Qingyang, Gansu province, have uncovered one of the largest known human settlement complexes of its time in China, according to an online conference Wednesday by the National Administration of Cultural Heritage.

“The site offers key physical evidence of the central role of the middle course of the Yellow River in the birth of Chinese civilization,” said Han Jianye, a professor at Renmin University in China who is leading the excavation.

A joint archaeological team involving the university, the Gansu Provincial Institute of Cultural Relics and Archeology and other institutions is in charge of the ongoing excavations.

â€œThe site is also important in helping us understand how the early states were formed,â€ Han said.

An adobe foundation was excavated, with its structure and spacious interior space, as large as 630 square meters, leading archaeologists to assume that it was a “palace”.

From 2014 until last year, archaeologists continued their research around the “palace” and found nine adobe terraces in the area. Several other foundations have been uncovered, which were examined in the last round of formal excavations this year.

Han said the focus is on the central area of â€‹â€‹the ruins, covering around 30 hectares. The area was surrounded by three layers of defensive moats.

The layout of the nine terraces was symmetrical and they were located in the center of the central area. Han said the strict arrangement was rarely seen in the previously discovered settlements of this period.

One of the terraces was excavated this year. Despite several millennia of erosion, the 880 mÂ² terrace still stands almost 3 meters above the ground.

“And the ‘palatial’ buildings and the defensive system are also extraordinarily large,” he said. “These findings jointly reflect strong public power, indicating that this region has entered an era of civilization.”

Major cultural relics unearthed this year include a large amount of painted pottery, with a 74cm high pot being the highlight.

Charred rice showed the development of agriculture, and arrows made of stone and bone, which were dyed red, can also help archaeologists visualize the ritual system of the time.

In the much later Zhou dynasty (c 11th century-256 BC), red arrows were bestowed by kings as gifts to vassal states.

â€œPottery, arrows, and some other artifacts have special patterns, and they would be used for sacrifices and ceremonies,â€ Han said.

Surveys in recent years suggest that the Nanzuo site may extend over an area of â€‹â€‹600 hectares, 200 hectares larger than the Shimao site in Shaanxi province, the largest prehistoric city ruins ever discovered in China.

“If it was possible to confirm that such huge ruins date from the same period with future research, Nanzuo would likely be a find at a World Heritage site,” said Zhang Chi, professor of archeology. at Peking University.

“The buildings discovered, as well as those still unknown, could compose an architectural whole whose scale exceeds our imagination.”

Based on the artefacts unearthed, archaeologists now tend to believe that the Nanzuo site, at least its central area, belongs to the late Yangshao culture period, dating back 5,000 to 7,000 years in the north. from China.

The discovery of the Yangshao culture a century ago is widely regarded as the birth of modern Chinese archeology. In the eyes of researchers, Nanzuo’s recent discoveries are a good birthday present that sheds new light on studies of Yangshao culture.

Although the Yangshao Cultural Center is in central Chinese provinces such as Henan and Shanxi, archaeological findings have shown that the eastern part of present-day Gansu province was likely one of its origins.

â€œAt the end of the Yangshao culture period, its people returned to their homeland, as Nanzuo indicates,â€ said Li Xinwei, a researcher at the Institute of Archeology of the Chinese Academy of Social Sciences.

â€œThe site represents a type of civilization, which may have had a lasting influence on the emergence of large-scale cities in the later period across northwest China, such as Shimao, but the missing links between them lie in wait. ‘be unveiled,’ Li said.