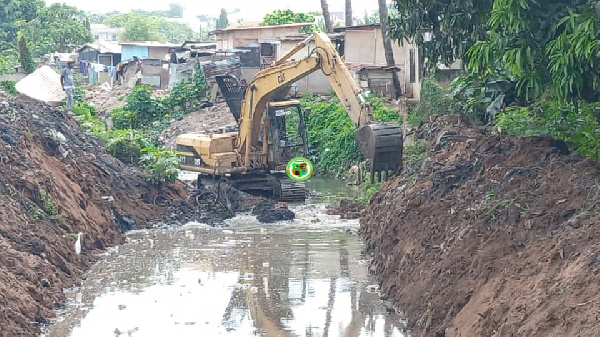 Ga East Municipal Assembly (GEMA) Municipal Chief Executive Officer (MCE), Elizabeth Kaakie Mann, assured residents of the Assembly’s preparedness to prevent flooding in the Municipality as she inspects the start of dredging waterways in flood-prone areas of the municipality. Monday.

The MCE, who was accompanied by the Presiding Member (PM), Jesse Nii Noi Anum, said that the Assembly is obliged to ensure that citizens live in a safe and peaceful environment, thus doing its best to avoid flooding in the municipality.

The dredging of a 1 km section of the watercourse from Dome Railway Crossing to Dome Konka, funded by the Assembly’s Internally Generated Fund (IGF), is expected to take at least two days.

She indicated that the Assembly was seeking the support of the Department of Hydrological Services to ensure that all heavily silted and constricted waterways are dredged to prevent any possible flooding.

She lamented the negative habits of residents who dump waste into sewers and waterways and warned those who engage in such practices to refrain or be punished for their misdeeds.

The presiding member, Jesse Nii Noi Anum, observed that some residents contribute to the occurrence of floods by building and erecting structures haphazardly in the community without resorting to the Assembly.

He advised future developers to always approach the Assembly before embarking on any project, temporary or permanent.

Engineer Ceaser Sackey revealed that his team had identified flood-prone areas in the municipality, adding that the Assembly was working with the Department of Hydrological Services to dredge waterways in these areas to help prevent flooding. floods.

Mr. Jacob Erbynn, President of the Dome East Residents Association, expressed his utmost gratitude, on behalf of the residents, to the MCE and the Assembly for responding promptly to their request to dredge the waterway in their region and goes the extra mile to inspect their development challenges.