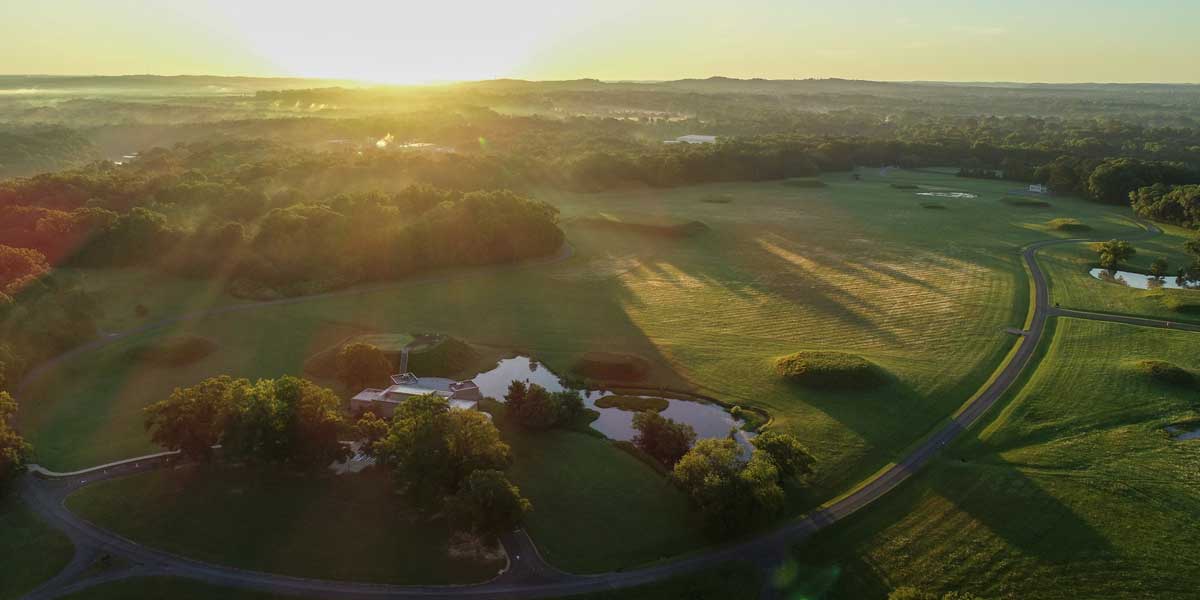 Fourteen miles from the University of Alabama’s bustling college campus is the site of another thriving community. Over 900 years ago, Moundvillenicknamed The Big Apple of the 14th century by National geographic, was once the largest city in America north of Mexico and one of the most powerful prehistoric communities of all time. Today, what remains of this huge settlement of Mississippian culture is one of the nation’s most significant Native American heritage sites. This hidden historic gem is now operated by the University of Alabama College of Arts and Sciences and is open to the public seven days a week.

To fully appreciate the park, it is important to paint a picture of what it once was by learning about its history. Located on the Black Warrior River, Moundville was once a thriving ceremonial and political center of Mississippian culture. The city is estimated to have been built around 1120. At its height, around 1,000 people lived inside its fortified wooden walls and another 10,000 lived in the surrounding area.

Moundville was a planned community of 29 flat-topped mounds of earth built around a broad central plaza. Each mound served as a platform for civic or ceremonial structures, as well as the homes of nobles. The tallest mound, known as Chieftain’s Mound, is almost 60 feet. The entire 300-acre development was situated on a bluff overlooking the Black Warrior River, a major source of life for the Mississippian people. Unlike earlier societies that relied on hunting and gathering, the Mississippian culture developed sustainable agricultural practices that allowed for the creation of permanent settlements. Moundville was one of the largest and most complex societies, second only to Cahokia in Illinois.

Most of what is known about Moundville has been discovered through archaeological digs. Although it is unclear what exactly brought this community together, archaeologists believe that the mounds gradually fell into disuse between 1300 and 1450. Evidence suggests that the inhabitants dispersed, building single-mounded sites the along the river, leaving Moundville to become primarily a cemetery.

The first scientific excavation of the site began in 1929, and from 1933 to 1941 a major project took place to restore the mounds, build roads around them, and build a museum in her honor. At the time, over 500,000 square feet of the site, including over 2,000 burial sites, the remains of 75 houses and thousands of artifacts were discovered. However, this only represents 14% of the site. The site became a National Historic Landmark in 1964, and in 2010 the Jones Archaeological Museum in Moundville, originally built in 1939, underwent a $5 million renovation.

Begin your visit to Moundville with a self-guided tour of the museum’s Lost Realm of the Black Warrior exhibit. The exhibit tells the story of Moundville and its people through a series of realistic scenes with life-size human figures depicting a wedding ceremony, a chief’s house, a medicine maker in an earthen pavilion and d other common scenes of everyday life. In addition to the scenes, you’ll find over 200 ancient artifacts throughout the exhibit, as well as murals depicting everyday life. Don’t forget to take note of the beautiful snake-bird bowl carved from a single piece of stone.

Once you’ve passed through the museum, it’s time to take in Moundville as you take in its sweeping scenic views. As you stroll through the verdant gardens, imagine all the life that once unfolded on the very grounds where you walk. Be sure to climb the stairs to the top of Chieftain’s Mound for the best view of the park. Instead of seeing the sea of ​​green below, imagine hundreds of houses surrounding the mounds, with people trading, cooking, playing games, and going about their daily business.

Before you go, check out the park’s half-mile nature trail and the on-site Three Sisters Garden, where you can learn about Native American food and medicine. If you want to extend the adventure and get a taste of what it was like to live in Moundville, consider booking one of the park’s 34 RV and tent campsites.