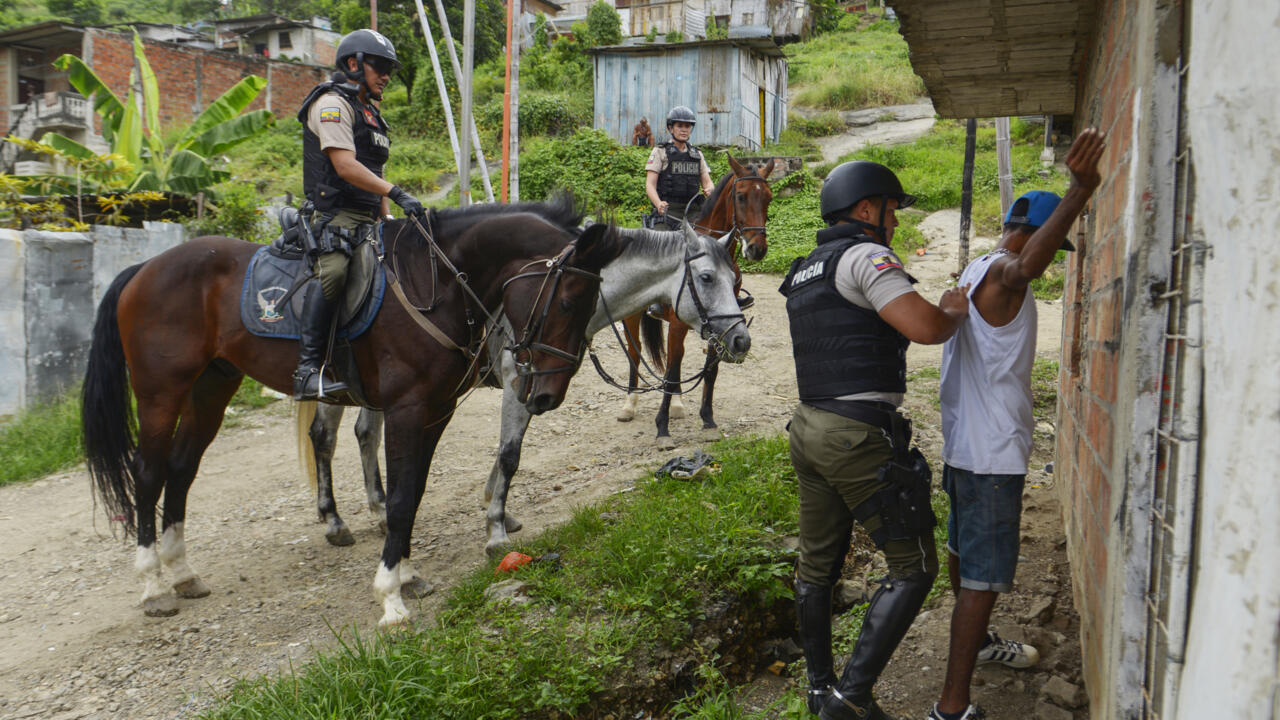 Durán (Ecuador) (AFP) – When Luis Sarmiento and his grandson went out early to buy bread one morning in March, they came across a shocking scene: a gruesome message left behind by Ecuadorian drug traffickers in the form of two headless bodies.

“I covered my grandson’s eyes, I went upstairs and I don’t know anything else,” recalls Sarmiento, a 78-year-old former worker who lives in the municipality of Duran, near Guayaquil, the most big city in Ecuador, for 16 years. years.

Drug traffickers have long targeted this hilly region to prepare young recruits for their “school of assassins”, a retired police chief told AFP on condition of anonymity.

Cartels recruit children as young as 10 to sell drugs.

“They sell first, then they give them a gun and turn them into killers,” said police colonel Jorge Hadathy.

In a hideout used by the Los Lagartos gang – one of Duran’s cartels – police found a collection of stuffed crocodiles.

They believe the gangs use toys to attract children, especially those that allude to the criminal group – Los Lagartos means “the lizards” in Spanish.

The majority of the 230 people arrested in Duran between January and April this year were aged 17 or 18, Hadathy said.

The group, he said, was responsible for “four or five deaths”.

The Cerro Las Cabras hill where Sarmiento lives has a reputation for violence in Duran.

In February, two bodies that had been shot were found hanging from a pedestrian bridge.

And five more mutilated bodies appeared between October and when the two beheaded showed up in March.

The killings are believed to be linked to cruel Mexican mafia-style settling of scores.

The murders are part of battles between rival micro-trafficking gangs, which move about $1.8 million a month in Duran alone, according to official figures.

Around 30 police officers search vehicles for drugs and weapons along the slope of the Cerro Las Cabras hill.

Inside the community, when police on horseback seize a man wearing a cap, residents follow events out of the corner of their eyes, but do not come out of their homes and talk openly about what is happening. they saw.

In their latest foray into the community, the police received military support for their operation.

Three of Ecuador’s provinces, including Guayas, where Duran is located, are under a state of emergency as the government seeks to crack down on gangs.

“The gangs are playing cat and mouse with us,” Sergeant Washington Reyes said.

The cartels employ the use of “bell ringers” — children who use lighter-sized radios to alert mobsters of police movements.

The whole place is “a drug supermarket,” says Hadathy.

“Families live off the sales or receive money from the mafias, and the others keep quiet out of fear.”

“If they don’t have places to play sports and live in a depressed place, of course they will join a gang,” she said.

“Sometimes a wolf isn’t evil out of desire, but because he has no options.”

Leaders like Junior Roldan and Ben 10, of the fearsome Los Choneros gang and its armed wing the Chone Killers, came from Cerro Las Cabras where they started out as hitmen, authorities say.

Their gang has been involved in the bloody prison riots that have rocked Ecuador in recent months.

Since February 2021, around 400 inmates have been killed in savage massacres between rival gangs fighting for control of the facilities.

Since January, 363 people have died in drug-related crimes in Duran and the neighboring towns of Samborondon and Guayaquil.

The latter is the main port of the country and the main point of departure for the tens of tons of cocaine shipped to Europe and the United States.

In Samborondon and Guayaquil alone, 43.5 tons of drugs have been seized this year.

Ecuador, which borders the world’s two biggest cocaine producers, Colombia and Peru, has for years been spared drug-trafficking violence from other Latin American countries.

But the country has become a logistics center for the drug market and a battleground between rival cartels.

Many compare Ecuador’s struggles to the terror wrought by Colombian drug cartels and their hitmen decades ago.

“You made the comparison with Colombia in the 1980s, but likewise Colombia is a country that has achieved economic development, attracted local investment, international investment and Ecuador is in a great economic moment,” said President Guillermo Lasso last month when questioned. by a journalist.