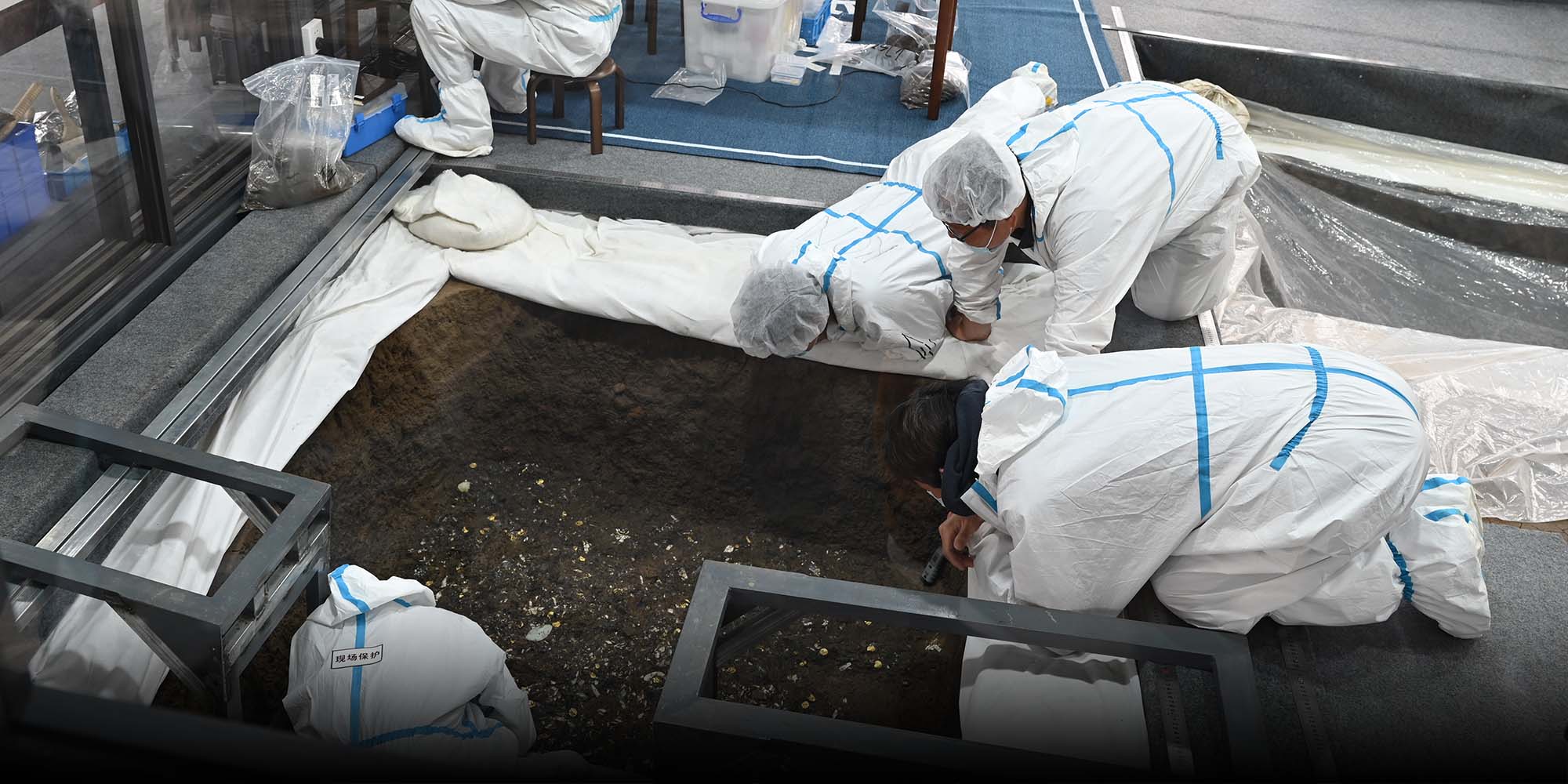 Discoveries of a 3000-year-old civilization

Chinese archaeologists have unearthed hundreds of artifacts at an archaeological site in southwest Sichuan Province, offering glimpses of an ancient civilization dating back more than 3,000 years.

More than 500 relics found in Sanxingdui, including fragments of gold and bronze masks as well as ivory and jade items, were unveiled over the weekend, according to the National Cultural Heritage Administration. It is the largest find at the ancient site in over 30 years, since the first major excavations began in 1986.

Zhao Congcang, professor of archeology at Northwest University in Shaanxi Province, told Sixth Tone that although the site was discovered almost a century ago, it was not until ‘a major excavation in 1986 as historical finds attracted public attention. At that time, more than 1,000 relics were unearthed in two graves, including a standing bronze figure, a bronze mask and a 3.95-meter-high bronze â€œtree of lifeâ€, now on display in the museum. from Sanxingdui.

“It will be of great academic importance for research to determine the age of Sanxingdui civilization, its cultural background and characteristics, as well as its origin and flow,” he said, referring to the findings. recent.

In 1987, Chinese academics proposed the name “Sanxingdui civilization” to describe the finds, assuming that the ruins date from the end of the Xia dynasty to the Shang and Zhou dynasties.

In light of recent discoveries, Sixth Tone takes a closer look at the ruins of Sanxingdui.

A fragment of a gold mask recently found at the ruins of Sanxingdui, Guanghan, Sichuan province, March 17, 2021. Xinhua

What are the ruins of Sanxingdui and why are they important?

Located in the city of Guanghan, about 40 kilometers north of Chengdu, the ruins of Sanxingdui are home to several artifacts from the Kingdom of Shu, a former state of present-day Sichuan Province. It is known to be the largest centralized site ever found in the region, dating back to the Xia (2070 BC-1600 BC) and Shang (1600 BC-1046 BC) dynasties.

Archaeologists say they have also found evidence of a walled city at the site which they say was founded during the days of the Shang Dynasty.

“(The findings) may provide valuable empirical evidence for further study of the exchanges between ancient Chinese and extraterritorial cultures, as well as their role and position in the global history of human cultural development,” Zhao said, adding that the Sanxingdui Civilization has an “important connection” with the origin of Chinese civilization.

Sanxingdui’s discovery dates back to 1929, when a farmer unearthed a cache of jade relics in Guanghan. The world didn’t realize the magnitude of the Sanxingdui ruins until 1986, when archaeologists discovered thousands of gold, jade, bronze, and pottery artifacts in the first sacrificial pit. However, due to limited excavation technology in the late 1980s, many artifacts have not been properly preserved.

Since the opening of the Sanxingdui Museum in 1997, the site has attracted millions of visitors. Among the museum’s most treasured objects are bronze heads with gold leaf masks and the bronze tree of life. Last year, several national museums, including the Sanxingdui Museum, offered live tours after advising people to avoid unnecessary travel due to the coronavirus pandemic.

In July, archaeologists also discovered what is believed to be a 5,000-year-old settlement near Sanxingdui. One of the finds, a pottery pig, has become a topic of discussion on social media due to its strange resemblance to a character from the hit mobile game Angry Birds.

What are the recent discoveries?

The artifacts unveiled on Saturday come from excavation work that began in November 2019. Local archaeologists have discovered six new sacrificial pits at the site in addition to the two found in 1986.

The finds included fragments of a gold mask – about 23 centimeters wide and 28 centimeters high – which became the mainstay of the current excavation. According to the head of the excavation team, the entire mask is expected to weigh over 500 grams and could be “the heaviest golden object of this period”.

Zhao, the teacher, described the mask as a “rare and dazzling treasure”. He added that another find, a carving on a piece of ivory the size of a mung bean, could perhaps be one of the earliest examples of Chinese â€œmicro-sculpting artâ€.

More than 100 ivory objects have been unearthed during recent excavations. A large number of pieces of ivory had also been found in previous excavations, although many could not be well preserved, according to national media.

Another discovery was the unpublished silk of the site. It is believed that such findings help researchers understand the importance of Sichuan as a key source of goods along the Silk Road after the Western Han Dynasty (206 BC).

Sun Hua, a professor at the School of Archeology and Museology at Peking University, told national media that the eight pits were filled at around the same time and that the relics found could be sacrificial artifacts of the same temple.

“If this conjecture is true, then this archaeological discovery could provide new support to restore the ritual space, the religious system, the social structure, the philosophy and the cosmology of the temple from this time on,” he said. declared.

A bronze sculpture on display at the Sanxingdui Museum in Guanghan, Sichuan Province, September 6, 2020. People Visual

What’s new in this excavation?

According to Ran Honglin, who is in charge of the current excavation project, the work has been a collaboration between experts from Peking University, Shanghai University and Sichuan University, and archaeologists have adopted modern technology to carry out the project.

This time, the team used â€œarchaeological hutsâ€ erected above the pits to control the temperature and humidity of the excavation site. They also helped minimize the amount of microorganisms and bacteria that workers bring to the site, which can damage artifacts.

This dig is also one of the few that has been broadcast live to the public, with millions watching it from their electronic devices in real time.

How has the public received the recent discoveries?

The extensive national and international media coverage is likely to help Sanxingdui local tourism in the future. Du Yu, a guide at the Chengdu Museum, said he noticed an influx of tourists visiting the bronze statue of Sanxingdui at the museum over the weekend.

â€œMany museums around Chengdu will benefit from the public’s undivided attention from Sanxingdui’s new discovery,â€ Du told Sixth Tone. “It demonstrates the public’s interest in the culture and civilization of the ancient Shu Kingdom.”

Since Saturday’s announcement, more than 5,000 people have visited the Sanxingdui Museum daily, double the average weekend attendance. Many netizens also said they would be ready to visit the museum and see the newly discovered artifacts.

Meanwhile, the dig has taken a turn on Chinese social media, with many users attacking state-run China Central Television for inviting author Nanpai Sanshu, who writes about grave robbers. , to give his opinion on recent discoveries. Experts and social media users have strongly suggested that linking archeology to grave looting – a serious crime in China – is unnecessary and misleading.

(Header image: Archaeologists find more than 500 cultural relics dating from around 3,000 years ago at the ruins of Sanxingdui in Guanghan, Sichuan province, March 20, 2021. People Visual)

2021-03-23
Previous Post: Seema Chishti Reviews Indians: A Brief History of a Civilization, by Namit Arora
Next Post: The Suez Canal shows that civilization is more vulnerable than you think