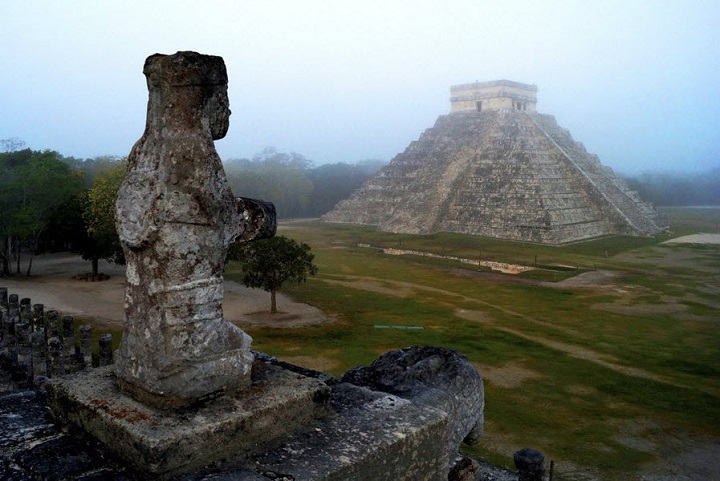 Did the Mayans disappear? The Rise and Fall of the Mayan Civilization – The Yucatan Times

In Yucatan, seated at the door of his house, Don Juan Ek Tun observes how the sun gradually illuminates the church of his village, a construction of the 17th century. It is 6:30 a.m. Don Juan is 85 years old and no longer works in the fields. His wife, Mrs. Jacinta ChablÃ© Can, 83, speaks to him from inside their house.

They speak Mayan and have all the beliefs and customs that their respective fathers taught them. Now they work at home and feed their backyard animals: chickens, turkeys, pigs.

Don Juan and doÃ±a Jacinta’s five children live in another village, one is a teacher and the others are traders. Three of doÃ±a Jacinta and don Juan’s grandchildren live abroad, two in the United States and one in Germany.

The Ek ChablÃ© family and all their descendants have many things in common: they all speak Mayan, including the grandchildren who live abroad, they have all learned the customs and beliefs of their ancestors, they all love the land where they were born, although some no longer live in Yucatan, sometimes the grandchildren who are outside the country communicate with their grandparents via video calls. For don Juan and doÃ±a Jacinta, new technology is no longer unknown.

In 2000 BC, one of the first human groups to settle in the mountains of Guatemala, began to differentiate themselves more and more from others, adopting their own characteristics and forming a new group that anthropologists, linguists and archaeologists have called it proto-Maya. Later, other subgroups of the Proto-Mayan group began to split up and move to other places, such as the Yucatan Peninsula, which is part of the present-day Mexican states of Chiapas and Tabasco; Belize; the rest of Guatemala and part of Honduras and El Salvador, thus giving birth to the Mayan linguistic family and forming the current Mayan area.

Throughout this vast territory of Central America, these first Mayans began to develop their culture, their social and political organization, as well as their magical thought and their nascent architecture, some of these villages becoming veritable imposing cities, during this period. known as pre-classic. .

It was not until 300 AD that the entire Mayan area was occupied by these primitive villages, already converted into cities, then began the peak of Mayan culture, reaching the levels of civilization, at the so-called classical stage.

It was 600 years of the heyday of the Mayan civilization, six centuries in which the knowledge acquired over thousands of years back, had its splendor. The political and social organization, science, art, agriculture, commerce, shone very brightly.

Here we have to point out something important. Culture is not the same as civilization. Culture is the collection of all ways of being and doing human beings, and includes both tangible and intangible aspects. Civilization is the highest degree of development achieved by a society or culture. All human societies have a culture, but not all of them reach or have not reached the level of civilization.

In the 9th century, several adverse events in the Mayan region, such as: droughts, earthquakes in seismic areas, hurricanes, deforestation, soil depletion, famine, disease, and the lack of response of the ruling class to cope, resolving these situations, gave rise to deep social discontent. The rulers and priests questioned their gods about all of this, but magical thinking failed to provide solutions to the problems and uprisings arose, veritable revolutions that destroyed many cities.

In a century, the IX of our era, the Mayan civilization was ruined, many cities were abandoned, the splendor suddenly stopped, new cities were not founded, the population lived in villages around the ruins of the old one. metropolis. It was the so-called Mayan collapse.

Pre-Columbian life continued in a period that is now called the decadent or post-classical period. But a hundred years later, in the 10th century AD, Chichen Itza stood on the Yucatan Peninsula as the last major Mayan city. However, in the 13th century this city also came to an end. The Mayan civilization had just collapsed, when in the 16th century, 1517, appeared in the Mayan region, in the Yucatan peninsula, the first Spanish conquerors arrived, and then began a new history of the Mayan people.

A story that reaches our days, and of which don Juan Ek and doÃ±a Jacinta ChablÃ© are part with their descendants, and they show us how the Mayans did not disappear, how the Mayan culture continues to live in the modern Mayans, heirs of the les ancient Mayans who built one of the most amazing civilizations in ancient America.

Indalecio CardeÃ±a VÃ¡zquez. – Anthropologist, researcher and writer.
He collaborated with the “Unidad YucatÃ¡n de la DirecciÃ³n de Culturas Populares”, Instituto Nacional Indigenista and was director of the â€œJuan Gamboa GuzmÃ¡nâ€ Pinacoteca at INAH. Among his anthropological works are the iconographic analysis of the sacred colonial art of the Yucatan Peninsula; the symbols of the facade of the house of the conquistador Montejo, in MÃ©rida; Mayan symbolism in the Yucatan cathedral and archaeoastronomy among the Mayans.

Professor CardeÃ±a has written several books and articles from the mid-1980s until today.

2020-02-14
Previous Post: Oslob wants whale watching in Tanawan to be reclassified as an “urban” area; abandon the plan to limit not. tourists per day
Next Post: “We need more people to live in the urban area”