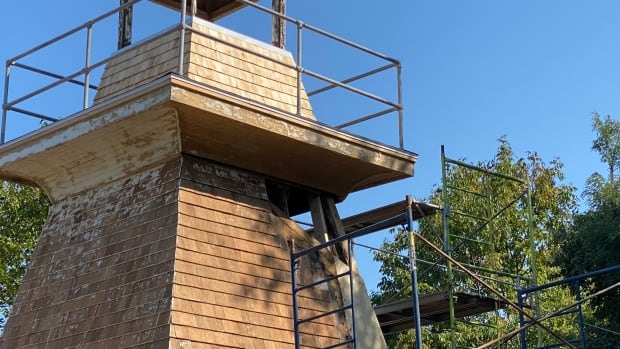 The Bear River Lighthouse in Smiths Cove, Nova Scotia will soon be visible again to people on the water or crossing the bridge to the Digby County community.

The lighthouse was decommissioned in 2001 and until recently was completely hidden by trees. But last year, the Municipality of Digby took ownership of the lighthouse, and the Smith’s Cove Historical Society is in the process of restoring it.

“The response has been phenomenal. The whole community is very supportive of what we’re trying to do here,” said Donalda MacBeath, president of the historical society.

The goal is to create a park, MacBeath said. The first phase involves restoring the salt shaker style lighthouse and clearing the land. The second phase is the development of a footpath and the third phase is landscaping and the installation of information panels on the history of the lighthouse.

The group was able to fund this project through municipal and provincial grants and fundraising. MacBeath estimated the project would cost $72,000. She said they only needed about $10,000 to achieve this goal.

Things were quiet at the lighthouse on Saturday, but there were clear signs that work had been done. Scaffolding covered part of the structure and the old white paint was removed. A nearby trailer was filled with debris and some trees had been marked with orange ribbons to let workers know which ones not to remove.

MacBeath said the group hopes to accomplish everything within three to five years and is on track to complete the first phase before the end of this year. She said the second phase could start as early as spring 2023.

“It’s beyond our wildest expectations that the project has come this far,” MacBeath said. “Personally, it warms my heart to go and see the lighthouse and see it restored and I think if you see some of the posts that have been online, the community definitely feels the same way.”

Restoration work on the lighthouse began in August. In a bulletin last year, the Municipality of Digby said ‘the state of uncertainty between owners has been stressful for the lighthouse’.

“After many years of neglect, the exterior shows decay. The vegetation around the lighthouse has grown unabated and the road to the site is almost impassable.”

Sandy Rudolph, a historical society board member and avid sailor who spent summers at Smiths Cove as a child, said the lighthouse was unlikely to have survived much longer.

“The lighthouse … was in such disarray, the contractor – when he was doing the top part of it it had so much rot that he said in a good wind we would probably have lost the whole top, so it would have could have been something that would have happened this winter if we hadn’t had control and done the work on it,” Rudolph said.

Rudolph said the original headlight lens was stolen sometime after it was taken out of service and it’s something they’re looking to replace eventually.

“I’ve contacted the Coast Guard and they’re looking for a lens that might be in one of their stores for us,” Rudolph said.

“And we’re hoping at this point to get a lens back that we can actually put up there and we’re going to put a solar light as well. So it’s going to be a form of light for viewing, not for navigation…to make it the most original possible.”

Rudolph said the contractor was two or three weeks away from finishing.

“It will bring it back to its original glory,” Rudolph said.

2022-09-11
Previous Post: The 4,500-year-old ruins of an ancient civilization once hidden in Pakistan are under threat from the country’s historic rains
Next Post: Kyathanpalli Municipality now renamed Ramakrishnapur