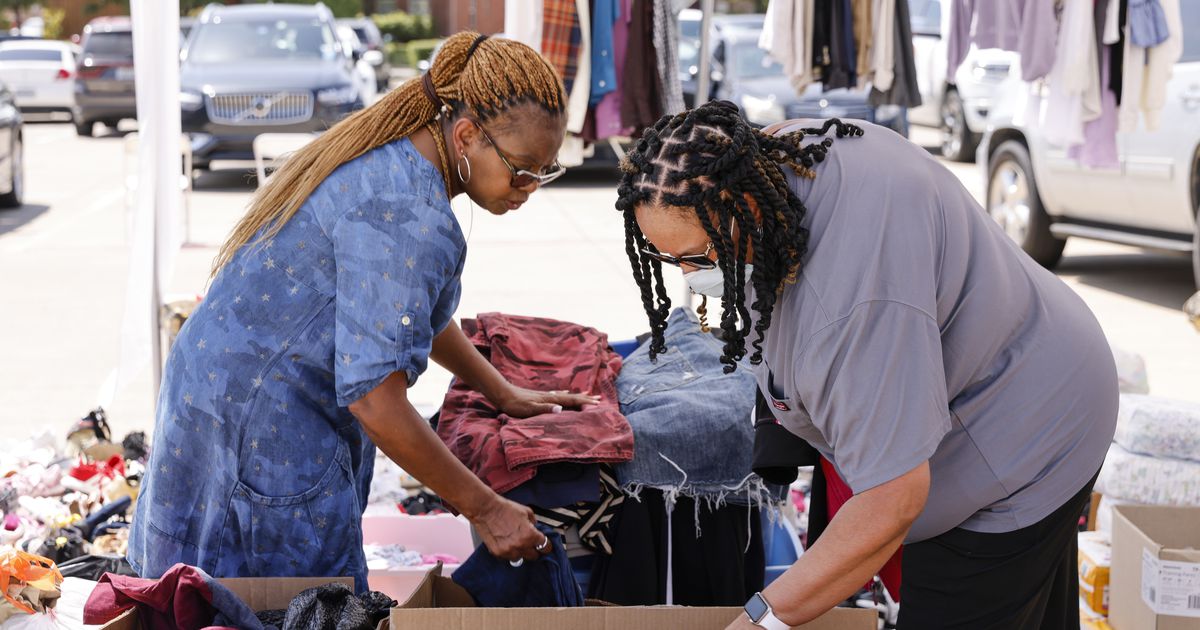 BALCH SPRINGS – Fred Jackson, 67, went through piles of clothes donated to victims of a devastating fire on Saturday, looking for anything he could take home.

Jackson pointed to a gray suit and said he went shopping for a new suit on Monday. Two hours later, he returned to find that “his whole community was lit up” by a fire that destroyed his home.

“Monday changed the course of many people’s lives,” he said.

In response to the fire, members of the Spring Ridge Homeowners Association quickly turned their planned summer block party into a massive donation and benefit campaign for affected residents. More than 10 organizations helped out, along with neighborhood volunteers.

Block party essentials remained for the benefit of Mackey Elementary School – not far from where the fire burned days earlier – including a bouncy house, upbeat music and games garden, with Soulman’s Bar-B-Que serving summer festival staples. But a large tent in the parking lot, with clothes hanging beside it as volunteers organized hundreds of donations, showed this was a different kind of community gathering.

HOA board member and event organizer Ralph Kinnel said the group wanted to give residents the space to grieve but also to show community support.

“It will get better over time,” he said.

Kinnel, who lives in the neighborhood, said when he got home from work on Monday, neighbors shouted from the road to turn around.

“I thought it was a mass shooting, I didn’t know what it was,” he said.

Cynthia Henry, of the Tabernacle of Praise Missionary Baptist Church, was one of dozens of volunteers working on the hot summer day to direct donations and help victims. She said the groups accept all donations.

“This is our neighborhood,” she said. “We just give back.”

The donation tent quickly filled with tables of water bottles, ice packs, diapers, menstrual products, toiletries and piles of clothing that continued to grow in size. afternoon. Hundreds of shoes were laid out, from winter boots to children’s Crocs, and dozens of paper bags held school supplies.

Cars drove for hours as people dropped off whatever they could. Marie Tedei, a member of the Balch Springs City Council, said the donations “came from all corners” of the Dallas-Fort Worth area.

Local vendors and charities such as Sharing Life Community Outreach have also set up stations to provide resources, non-perishable food and even star wars children’s comics.

“They want to go home”

Andre’ Camp, 43, has lived in the neighborhood since 2006, but his house was destroyed on Monday.

“It’s hard trying to put the pieces back together,” he said at the benefit night on Saturday.

Her 14-year-old son was the only one of her four children at home when the fire broke out. He said his children were fine, but his 5-year-old twins were too young to fully understand what had happened.

“They want to go home, and we have to explain to them that the house has been damaged and we can’t go there,” he said.

Camp’s family is now staying with his mother as they work with their insurance company to decide whether to rebuild or move. He said what his family and others need most right now are gift cards and cash donations, so they can buy exactly what they need to replace what has been lost.

“I appreciate all the outpouring of support and donations,” he said. “It’s been a blessing for my family.”

Sandra Johnson-Williams, 61, was at home when the fire broke out and quickly had to evacuate her home of four generations, including her mother.

She lost everything in the fire: old family photographs, wedding photos and jewelry, including wedding rings from her first husband, who died 17 years ago.

“We barely got out,” she said. “It was very traumatic and overwhelming. There were things in there that are irreplaceable.

Her mother, who has dementia, was moved to a long-term care facility, despite Johnson-Williams’ resistance to separating her from the family.

“With all the chaos going on, it was better for her to leave,” she said.

Johnson-Williams was at Saturday’s event with her friend Charles Ward, 62, who was living in her home after a spell of living out of her car. He says he lost all his possessions, including his medication.

“I lost everything before,” he said. “It’s devastating to go back to square one.”

When asked what he was going to do now, Ward replied, “Ask God to help me, thank him for bringing my family out…keep your head up and move on.”

Jackson, the resident who went shopping the day of the fire, said his insurance company told him rebuilding his home could take more than a year. He expressed his gratitude for the help from the community, but said he was unable to replace his CPAP machine, which helps him sleep, because he has to file a police report first. .

“They know I have this really bad condition,” he said. “It really hurts my heart.”

The City asked the owners to mow the field

Before the fire, the city had asked Mountain Express – the owners of the land where the fire started – to mow the grass twice through code enforcement, followed by a court subpoena.

Workers were mowing the field near Interstate 20 and Belt Line Road on Monday in response to requests. When the mower blade hit something, maybe metal or concrete, a spark ignited the grass.

The fire caused more than $6 million in property damage, but no one was injured.

Balch Springs Fire Marshal Sean Davis said the field had seen a few fires this year, which were quickly extinguished. Dry and drought conditions have heightened fire risk this year, and firefighters have battled several large blazes, including a recent grass fire in Tarrant County and a wildfire at Possum Kingdom Lake.