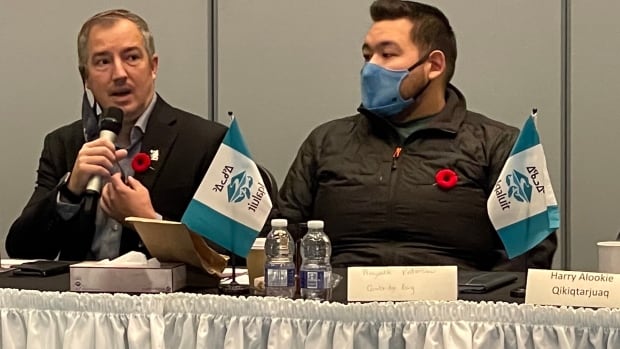 Cambridge Bay community members are asking the hamlet to be transparent about its process for appointing a new mayor.

Angulalik Pedersen was appointed the new Mayor of Cambridge Bay on November 4, following the election of former Mayor Pamela Gross as a member of the Legislative Assembly of Nunavut in the October 25 territorial election.

Residents like Peter Ohokak and Charles Zikalala said the hamlet had not been transparent about Pedersen’s nomination process. They said Pedersen was named at a special lunchtime meeting without public consultation, and the community was only made aware of the decision through a social media post.

According to Ohokak and Zikalala, residents were surprised by the announcement and are looking for answers. This is why Ohokak and Zikalala created a petition, which was signed by members of the community who share their concern.

“We wonder why the Municipality of the Hamlet of Cambridge Bay, the council members – why did they decide to appoint a mayor for Cambridge Bay for two years, even though we had huge voter turnout in the territory? Ohokak said.

“And for them to do it in a way that was a little underhanded and, in our opinion, very underhanded and underhanded – the way they informed the community was not acceptable to any red-blooded Canadian who believes in democracy.”

Residents deplore the lack of communication

In addition to calls for transparency, Zikalala said much of the conversation turned heated on social media, with some hamlet workers removing posts posted by affected community members.

In addition to challenging residents’ democratic right, Zikalala said the lack of communication affected freedom of expression in the community.

“For them to delete posts – it is unethical and it also silences the voices of the community further, especially on such an important subject,” he said. “This is a public platform for people to voice their concerns, especially something of this magnitude.”

According to Pedersen, the hamlet decided to appoint the new mayor instead of holding a by-election due to Elections Nunavut’s ability to support the hamlet.

“The problem the council had with the by-election was that Elections Nunavut was and still is busy with the previous territorial election and they advised the municipality that if we were to go the by-election route – the Election of the mayor would not be possible before the new year in 2022 ”, he declared.

The mayor responds to communication problems

Pedersen also said the hamlet does not communicate via social media outside of announcements. He said this made it difficult for the hamlet to address residents’ concerns, as many of them shared their thoughts online.

“It’s very difficult – really impossible – for municipalities to do business on Facebook and that’s where a lot of these problems have arisen,” he said. “We’ve been very loud about this… and I’ve emailed my mayor as well. If people have any concerns I’m very happy to take them on board and bring them to council.”

Ohokak said he would present the community petition to the mayor on December 6.