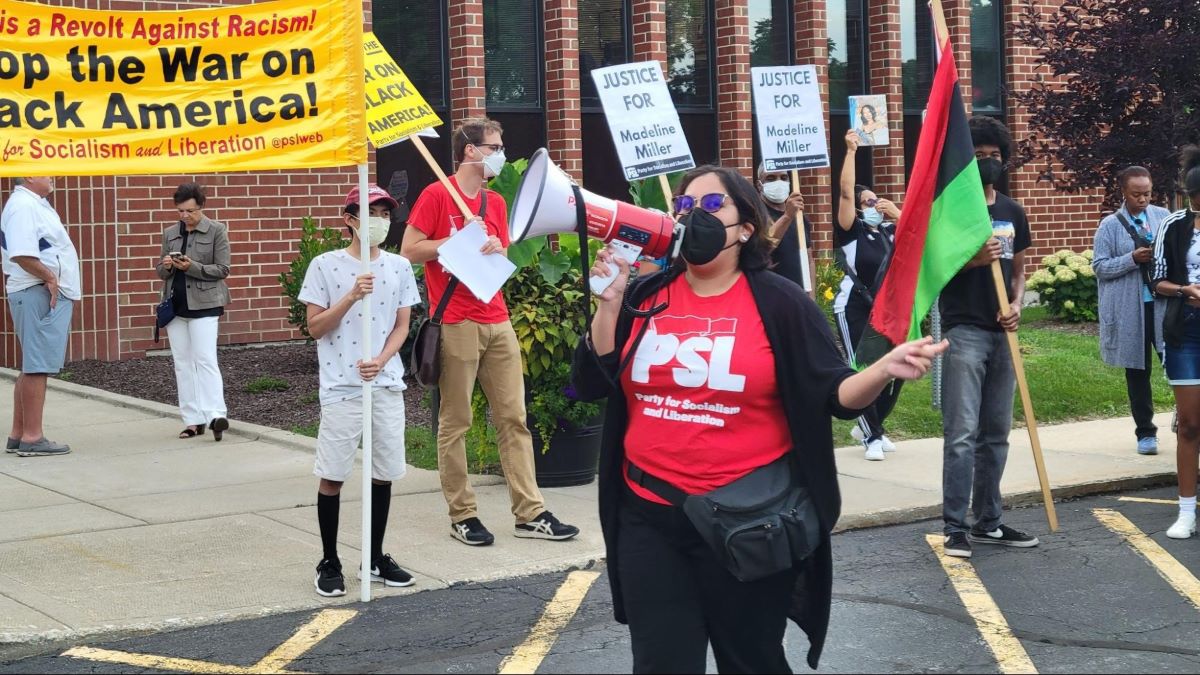 On August 15, the police chief and mayor of Flossmoor, a Chicago suburb, said over chants of protesters that the shooting murder of 64-year-old black grandmother Madeline Miller by police in Flossmoor was justified and in accordance with department policy.

Miller was killed by Flossmoor Police on July 10 while suffering from a mental health crisis. The officers who arrived ordered her out of the house she was in. A policeman shot her immediately after she left the door, and two seconds later another policeman shot her twice more.

Residents, family members and activists have attended every village board meeting since Miller’s murder, demanding that the council discuss police reforms to prevent future killings and appoint officers who have shot Miller. Chants broke out and the council ended the August 1 meeting when Mayor Michelle Nelson refused to expand the public comment section to allow everyone present to speak.

At the rally ahead of the August 15 meeting, local resident and community psychologist Dr. La’Shawn Littrice started chanting demanding an end to racist policing and said, “If Madeline was a white woman, we know she would have survived.

Fight in the meeting room

At the meeting, the agenda was changed so that public comments come in at the end of the meeting. This was a measure to deter protests and ensure that village affairs could go on without interruption. The decision was so abrupt that the official Flossmoor website hosted two different versions of the agenda, with two different times for public comment.

When the mayor proceeded with the version of the agenda that placed public comments at the end of the meeting, chants of “Let them talk” broke out and the council took a break and left the room. . After the crowd began to demand ‘Come back’, the council returned and quickly went through the agenda in minutes so that Flossmoor Police Chief Tod Kamleiter could make a statement saying, ‘Our support is with officers who were faced with making a difficult, but necessary decision to use force.

Nelson and the village board backed the chief’s statement, saying they “support the officers and emergency personnel who responded to this dangerous call”.

When chants resumed shaming the police chief and board for concealing the identities of the officers who killed Miller and supporting the decision to kill her, seven people were escorted out of the meeting by the police.

Subsequently, Miller’s family and their supporters were for the first time granted additional time to address the council. Miller’s funeral was held two days earlier, but the family was still determined to show up.

“It’s an atrocity that happened here, and we don’t seem to understand the seriousness of it or just want to gloss over it,” resident and teacher Penny Lee-Cox told the council. She spoke of the trauma children face as a result of police terror. “I see him at school every day. Every time there’s a shootout with a policeman, they ask me, ‘Am I next?’ What kind of society do we live in to allow our children to continue to see this? »

Kamleiter claimed that “both officers responded in accordance with Flossmoor Police Department’s use of force policy, given the immediate danger in the home and the brandishing of a deadly weapon.” Body camera footage released shows Miller outside the house when she was shot.

Miller’s possession of a knife is cited as justification by Flossmoor for the shooting, stating that she had a “deadly weapon”. However, not even a week before his death, police in nearby Highland Park managed to arrest mass shooter Robert Crimo III, a white man who had killed seven people and injured more than 30 by shooting a gun. 4th of July parade. According to police, Crimo had a gun in the car he was taken out of during his arrest.

Finally, the names of the officers who shot Miller would be withheld because “this incident is an active investigation by the Illinois State Police.” In 2019, after the shooting of Jemel Roberson by Midlothian policeman Ian Covey, the FAI argued in court that the decision to name the officers involved in the shootings was the decision of the municipality which employs the policeman, even when an investigation is underway by the ISP.

Kamleiter is right when he says village officials are “confident that the independent investigation will confirm our beliefs”. PSI investigations are purportedly independent, but no officers in the Chicago suburbs where PSI investigates police shootings have been disciplined, fired, or charged after a shooting in recent memory. Justice for Madeline Miller won’t come from the toothless structures that would oversee suburban Chicago police departments. Only a determined and persistent mass struggle will force the necessary changes on Flossmoor and hold the cops who killed Miller accountable for their actions.