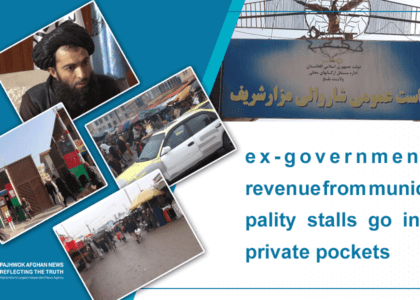 MAZAR-I-SHARIF (Pajhwok): The annual income of more than 19 million Afghanis from 728 municipal stalls in Mazar-i-Sharif has landed in private pockets instead of state coffers, Pajhwok Afghan has learned News reliably.

The stalls belong to the municipality of Mazar-i-Sharif, but according to the findings of Pajhwok Afghan News, from 2015 to early 2021, the income from these kiosks has lined the pockets of some people.

An investigative report on the matter revealed that each booth was rented for around 2,200 afs per month. The annual income of the stalls amounted to 19,219,200 afs.

Despite the fact that the stalls are the property of the municipality, powerful individuals have occupied them and rented them from 5,000 to 500,000 afs.

In addition, the stalls were ceded by one powerful individual to another and the collected revenues went into private pockets.

Stalls at key points in the northern city sold herbal remedies, children’s clothing, and other items.

Recognition of the mayor

Mayor Maulvi Qudratullah Tariq, in an inclusive conversation with Pajhwok Afghan News, acknowledged the massive corruption and theft of the municipality’s revenue. But the misuse of the income had been stopped, he explained.

Examining the documents from the municipality, he said they learned that the revenue collected from 728 stalls was going into private pockets instead of the public treasury.

Each booth was rented for 2,200 afs, the mayor said, adding that different people occupied the booths and became shareholders.

Tariq alleged: â€œMost of the municipality’s revenue was embezzled under the previous government. The revenues from 728 stalls went into private pockets. Each stand was billed at 2,200 afs. Some of the kiosks were bought by powerful individuals and the municipality was thus deprived of a good income.

But after the takeover of the Islamic Emirate, he said, the corruption had been eradicated. A fair tax would be collected from the people who run the stalls, given their economic situation, he promised.

The tax would go to the municipality, not to the strongmen, assured the official. A strategy, he said, was being developed.

Tariq claimed that after the corruption stopped, there had been a drastic increase in the municipality’s revenue. No one would be allowed to commit acts of corruption, he argued.

The mayor also clarified that no one would be allowed to embezzle municipality funds or sell their stalls on their own.

Kiosks sold to us: Stallers

Mohammad Hassan, a resident of Mazar-i-Sharif, ran a stall in the town a year and a half ago. He sold cell phones and electrical items.

Hassan said he bought the stand from an individual. But after six months, the stall was snatched from him and sold to another person.

He complained that the kiosk was very small but he paid 2,500 afs a month.

â€œThey came on the 28e or 29e of each month to receive the monthly rent. We have not received any payment receipt. But they had a notebook in which they wrote our names and the amounts paid.

In addition, he said, 20 afs were collected daily from each stall for the welfare of the elder.

But Ziaul Haq, another merchant, said he had never paid an illegal gratuity in the past three months.

He said that at the end of each month, employees of the municipality took a specific amount of money from them and provided receipts.

He believed that more cases of corruption and embezzlement could be uncovered if fair investigations were carried out.

Mazhari said powerful individuals and local strongmen from the previous government had rented properties from the state at low rates. These stalls and shops were then sublet to other people at higher rates.

According to him, there would be an unprecedented increase in revenue if the municipality ensured transparency and collected the revenue on time.

He also suggested that urban income should be spent on developing the city’s infrastructure and making life easier for ordinary people.

Pajhwok made an effort to approach former officials for comment, but no contact could be made. Some former government officials are abroad.

This report was produced by Pajhwok and financially supported by UNDP and Denmark.