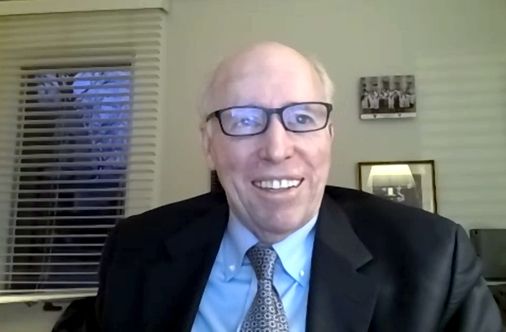 Boston doctor, speaking to Russians, warns of nuclear war and ‘end of civilization’

Muller spoke in Russian to about 115 scientists in a 15-minute video address broadcast on a Russian science TV channel. To illustrate the danger of nuclear war, he described how a nuclear attack could wipe out Boston – starting with a deadly “fireball” near the Charles River – as well as other cities in the United States and Russia. .

“It is difficult to respond to the nuclear threat because the extent of the damage is beyond our imagination,” he said. “But we must look in the dark to plan our escape.”

Muller, 79, who co-founded International Physicians for the Prevention of Nuclear War, was part of a team of American and Russian doctors who won the Nobel Peace Prize in 1985 for educating the public about atomic warfare and its “catastrophic consequences”. More recently, he has worked with colleagues in Russia to find ways to combat health threats like heart disease, cancer and COVID-19.

He accepted an invitation to speak at the Russian academy as Russian President Vladimir Putin’s assault on Ukraine continues, nearly all independent journalists in Russia have been silenced or exiled, and many international partners suspend research projects with Russian scientists and doctors.

“We hope that the path of reason and peace can be chosen and that we can resume our collaboration with our Russian medical and scientific colleagues on the problems of disease, space exploration and climate change – problems challenges that require a global response unfettered by violence and threats of nuclear destruction,” Muller said.

“Humans can be consumed by their differences and turn to violence as we are currently witnessing – but we can also think clearly, cooperate, negotiate and love. Let’s choose these characteristics of our nature,” he said.

Immediately after Muller’s speech, Dr. Alexander Sergeev, president of the Russian Academy of Sciences, suggested that doctors and scientists should not wait for leaders to reach a political agreement on Ukraine.

“We won’t get that tomorrow,” Sergeev said. “Can we do something now?” I think it is a very good idea to prepare and sign a joint declaration” between the scientific bodies of Russia and the United States.

The parties expressed their agreement that there can be no winners in a nuclear exchange and the importance of working together in the fields of science, medicine and space. But it was unclear when their joint statement would be released or whether it would explicitly criticize Russia’s war in Ukraine or call for a ceasefire. Anyway, said Sergeev, “we can agree on some things, which is very important.”

Another member of the Russian academy, Yuri Belega, research director of its special astrophysical observatory, cited half a century of “scientific diplomacy” with the Americans, citing the observation of Russian author Anton Chekhov that “there is no national science” in a global community.

“These connections, these networks should not be trampled on, but we will preserve them,” he said, while denouncing “the restrictions imposed on Russia” in these times of international tensions. “Scientific cooperation is the way to build bridges between like-minded partners.”

Russian scientists who oppose their country’s invasion of Ukraine need to be careful how they phrase their public statements, said Joseph Nye, professor emeritus at Harvard’s Kennedy School of Government and former deputy US Assistant Secretary of State for Security, Science and Technology Assistance. He cited a new Russian law that can jail citizens for up to 15 years for spreading what the Russian state calls “false” information, including portraying the invasion of Ukraine as a “war” rather than a “special operation”.

Nye said the kind of science diplomacy practiced by Muller and his American and Russian colleagues is important. “It’s useful to pierce the veil of ignorance that Putin is trying to bring down around the invasion of Ukraine,” he said. “You don’t want to break social ties or communications with Russians because you want to air the place out,” he said.

Muller, in his speech and his response to Russian questions afterwards, explicitly linked the assault on Ukraine to the nuclear threat, noting that Russian nuclear weapons were placed on high alert.

“We are in an extremely dangerous position,” Muller said. “The conflict takes us beyond Ukraine. This takes us to the end of human civilization.

Muller, who works at Brigham and Women’s Hospital, was inspired by an account first given decades ago by his former colleague, Dr. Bernard Lown, to clearly illustrate what this would mean for Boston, and by extension other American and Russian cities where he lived or visited.

“Multiple nuclear warheads, each more powerful than the Hiroshima bomb, would hit the city,” he said. “At the center near the Charles River, there would be a fireball with intense temperatures that would kill hundreds of thousands of people instantly. … The total death toll in Boston would be 3 million. There would be high winds and radioactive fallout. Medical care, even pain relief, would not be available as most hospitals, including the Brigham and Women’s where I work, would be destroyed and most medical professionals would be killed or injured…

“The tragedy that I have just described for Boston will occur in the many cities that I know well and admire, all of which are most likely targeted by numerous nuclear weapons – Moscow, Washington DC, St. Petersburg, Baltimore, Vladimir , Indianapolis, Novosibirsk and San Fransisco.

“In times of great peril, we must use every channel that might work,” said Holdren, who suggested that leading scientists have influenced their countries’ leaders in the past, but are not always able to. . “In the current situation, I don’t see much reason to be optimistic about the success of this particular intervention. But I don’t see any good argument against trying.

Anna Kuchment of Globe staff contributed to this report.