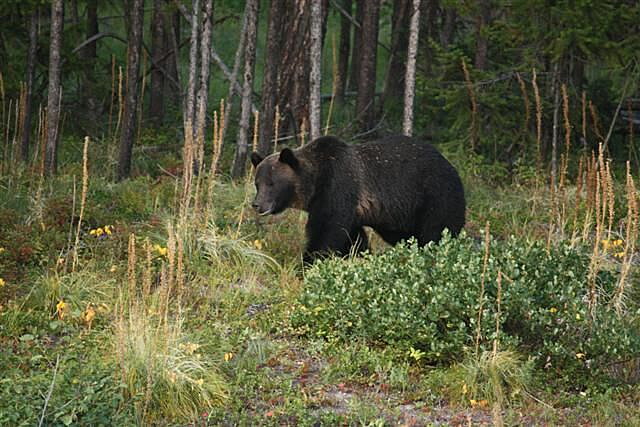 Bear Experts: Urban grizzly bear encounters in Missoula, a city on the “front line” of the problem

Black bears creeping into urban areas of Rocky Mountain West aren’t a new problem, but recent sightings of grizzly bears in the Missoula area have prompted local officials to step up efforts to foster best practices for safe coexistence with community members.

Jamie Jonkel, wildlife management specialist at Fish, Wildlife and Parks, said Monday that two young bears spotted in Bonner a few weeks ago were likely from the same North Hills family group that attacked a chicken coop in the area of Missoula last year. Jonkel estimated that about 100 grizzlies live in the southern end of the Northern Continental Divide ecosystem alone, with about 40 in the bottoms of the Clearwater and Blackfoot valleys.

“Everyone is a wonderful animal trainer and doesn’t know it. We’ve become a real training ground for behaviors we don’t like,” Jonkel said. “We turned bear cream into ice cream in the extreme richness of human-influenced habitats. Bears are having to adapt and be complacent to live in the lower 48 states right now, and we’re on the front lines of the urban wildlife phenomenon here in Missoula.

Jonkel was part of a panel of local experts on grizzly bear conservation efforts and managing human bear population conflict that were presented Monday at the Missoula City Club’s first in-person meeting since the start of the pandemic. City Club is dedicated to creating forums for civil discourse and attracted approximately 77 attendees this week.

At the forum, panelists highlighted an increasing prevalence of grizzly bear sightings in cities across the Northern Continental Divide ecosystem, the largest grizzly bear recovery area under the Endangered Species Act. in Montana, encompassing Kalispell and Missoula, and urged civilians to educate themselves about bear prevention on their properties.

Grizzly bears have been listed as a threatened species by the ESA since 1975, but have experienced staggering population growth in Montana thanks to recovery plans. Beginning in 1975, grizzly bears were reduced to 2% of their former range in southern Canada due to human-caused mortality and habitat loss. The Greater Yellowstone Ecosystem and NCDE grizzly bear populations are above 1,000, compared to just over 100 in the two largest bear population areas of the continental United States in the 1970s. also showed a map with dozens of grizzly bear sightings outside recovery areas over the past 10 years.

The U.S. Fish and Wildlife Service decided to remove grizzly bears from the GYE list in 2007 and 2017, both times blocked by Missoula District Court rulings as lack of genetic diversity for long-term population maintenance appeared as an external problem for radiation. The Montana Department of Fish, Wildlife and Parks is currently writing a proposal to increase genetic diversity through interzonal breeding of grizzly bears, but it has not set a public deadline for the proposal’s completion.

USFWS grizzly bear recovery coordinator Hilary Cooley said her office is already processing delisting requests filed this year by Montana, Wyoming and Idaho. Removing the ESA would mean grizzly bears could be legally hunted in these areas, which a 2020 University of Montana survey reported was favorable, with 61% of people agreeing that individuals should be able to hunt grizzly bears as long as that people “can withstand the pressure”.

Wayne Slaght, the manager of Two Creek Monture Ranch in Ovando, estimated he had 10 grizzly bears regularly on his ranch for nine months of the year and saw bears on cameras within 50 feet of his home. five days a week. After several livestock deaths and wooden sheds destroyed by bears, he spent thousands of dollars on electric fences and steel containers, among other prevention techniques.

“We have too many bears. It’s something we live with 24/7, and it’s an expensive headache,” Slaght said. “It’s better, though, to have us there than condos in the woods.” As land managers we take care of the land and give them good habitats, we just need to learn how to manage them.

Cooley said the USFWS is hiring five new people to resolve bear conflicts in the region, but civilians in urban areas recently frequented by grizzly bears are looking for new local solutions and educational opportunities. The rise in bear sightings in the city has prompted local activists like Jonkel to advocate for Missoula to become Bear Smart, a designation for community-based human-bear conflict management and education that Virginia City and Whitefish are also working on.

Jonkel launched the Missoula Bear Smart Working Group this year with other local advocates to begin that process, and the group is conducting a risk assessment to identify next steps for a human-bear conflict management plan. A GoFundMe for Blake Nicolazzo’s Bear Smart related projects has raised more than $5,000, and the task force plans to present the results of its assessment to city officials this summer.