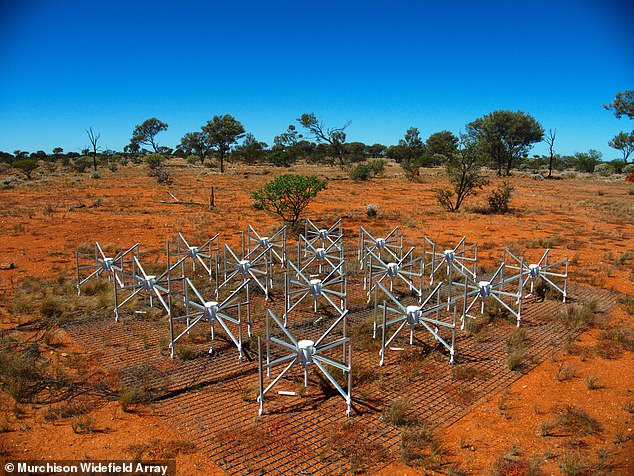 Astronomers declare no evidence of extraterrestrial civilization, after detailed research

Using the world’s most sensitive radio telescope, a team of Australian astronomers spent seven hours listening for signs of an alien civilization – but found nothing.

Finding these signs, which come from things like streetlights and industry, would provide evidence for the existence of intelligent extraterrestrial life in the Milky Way.

After seven hours of pointing the array at the galactic center, home to at least 144 known exoplanets and billions of stars, the team found no signatures.

This is the fourth such survey, pointing radio telescopes at known exoplanets at the galactic center, and none have found evidence of the technology.

Using the Murchison Widefield Array (MWA) in the Western Australian desert, experts from California’s SETI Institute set out to search for ‘techno-signatures’

The front end of the MWA consists of 4,096 spider-like antennas arranged in 256 regular grids called “tiles”.

They are spread over several kilometers within the Murchison Radio Astronomy Observatory (MRO).

The antenna data is correlated on-site before being transmitted to the Pawsey Supercomputing Center for long-term storage.

The telescope has been a popular tool in the search for extraterrestrial intelligence – especially for techno- and bio-signatures.

Although they were pointed to millions of stars in four different surveys, none of these signatures were found.

However, it should be updated soon and will be more responsive.

The spider-shaped antennae of the radio telescope used by the team are arranged in 256 tiles, designed to pick up very low-frequency radio waves from distant stars.

It is particularly useful for SETI, the search for extraterrestrial intelligence, as it has a wide field of view – allowing it to listen to a wide region of space at once.

The SETI team, led by Dr. Chenoa Tremblay, was looking for signals broadcast by intelligent life, although the same network can listen to molecules made by living organisms.

“We are looking for lasting signals or technological leaks in the daily lives of residents,” said Dr. Tremblay. Network.

Within the telescope’s field of view were 144 known and confirmed exoplanets, although how many of them are in the habitable zone is unclear.

They were all in or around the galactic center, home to billions of stars clustered in the highest density in the entire galaxy.

The average distance of the 144 known exoplanet systems within the field of view of this study was around 18,000 light-years – with the shortest at just 127 light-years.

With every star predicted to have at least one planet, even if only a fraction of them are found around habitable stars in the habitable zone – where liquid water can flow to the surface – the odds suggest that life should to be present.

Previous research, conducted by the same team and using the same telescope, involved much closer systems – ranging from a few hundred to a few thousand light-years away.

“This is our largest known exoplanet population in our four surveys with the MWA,” Tremblay explained.

Modeling, based on data fed into a computer about known star systems from the galactic center, suggests there is a good chance of finding habitable planets, the problem is that so far – no signs of anything either on these planets has been found.

After seven hours of pointing the array at the galactic center, home to at least 144 known exoplanets and billions of stars, the team found no signatures.

However, the galactic center is “very dusty” and therefore difficult to see. Research using space telescopes, such as the European Space Agency’s Gaia Observatory, has struggled to get an accurate star count for this region of space.

For this work, looking for signs of civilization, Tremblay and his colleagues used the Galactic Nucleus survey, which classified 3.3 million stars in the region – but this survey covered an area of ​​space equivalent to 1% field of view for MWA.

“If we extrapolate that, we cover billions of star systems right down to the center of our Galaxy,” Tremblay said.

This gives them plenty of chances to hear aliens, if they’re out there and making technologically identifiable noises.

They were looking at 155 MHz, which is a frequency range that reduces the risk of picking up communications and interference from Earth.

This is an image of the center of the Milky Way taken by the South African MeerKAT radio telescope. It shows high-energy radiation filaments, including supernova remnants, compact star-forming regions, and populations of mysterious radio filaments

What the team listens to in the radio signals is evidence of technosignatures, frequency spikes that correspond to artificially produced activity.

It could be radiation leaking from a major space engineering project, light from power systems that could be used to alter the orbit of a distant star, or even telescopes. in large scale.

More sensitive radio telescopes could also detect evidence of artificial light from cities, industry and transportation systems on a distant world, although NASA experiments have shown that these signatures could also come from natural sources like a large-scale forest fire.

The MWA is being upgraded, to allow it to operate in a wider frequency range, allowing it to match other technosignature seekers.

Previous studies by the SETI team using the MWA were also found to be empty. In fact, no search for technosignatures has uncovered evidence of an extraterrestrial civilization.

The results have been published as a preprint on arXiv.

Alien hunters have finally solved the mystery of what they call “the strange Parkes signal” that has got researchers everywhere excited about finding life on another planet.

A Search for Extra-Terrestrial Intelligence (SETI) team from the University of California, Berkeley took part in testing a signal detected by Australia’s Parkes radio telescope as it examined the Proxima Centauri system in 2019.

Proxima Centauri is the closest star to our solar system and has an Earth-like planet, Proxima b, in a so-called habitable zone.

It is 4.22 light years away, which would take about 73,000 years to reach using our current spacecraft technologies.

Many international researchers hoped that the signal, which had all the signs they hoped, was a “technosignature”, a marker that could signal the presence of life.

After weeks of testing, the Berkeley team decided it was probably a type of distortion called “intermodulation.”

In the case of Parkes’ signal, it was radio interference caused by the interaction of two frequencies used by devices on Earth.