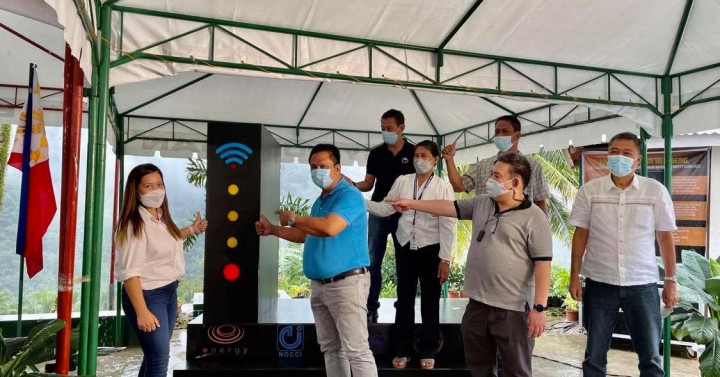 Located in an off-grid mountainous region, Barangay Puhagan is one of three EDC partner barangays in the municipality.

EDC owns and operates the 222.5 megawatt geothermal power plants of the Southern Negros Geothermal Project (SNGP) in Valencia, and has continuously provided the Host Local Government Unit (LGU) with various programs and projects to bring progress and development to the city and its inhabitants.

Bautista said that in this time of the 2019 coronavirus disease (Covid-19) pandemic, having a good internet connection will become “essential for people to be able to cope with their daily lives” and that they will no longer have need to leave their mountain barangay to access the Internet to communicate with loved ones, she said.

Degamo, meanwhile, thanked the promoters “for your continued efforts to bring this project to Barangay Puhagan”.

He told Puhagan officials, led by village chief Leonarda Sarita, that it is important to have a strong and stable internet connection to be aware of what is happening in relation to the Covid-19 crisis.

The governor also noted that digital technology, especially the Internet, is helping people connect and communicate as part of the â€œnew normalâ€.

Sarita thanked EDC for paving the way for the barangay board to improve the conduct of its virtual meetings and other events, while their students do not need to go further for their online or distance learning.

The free wifi installation is located in the lobby of the barangay of Puhagan, DICT ensuring the provision of the fixed wireless broadband network with a bandwidth of 40 Mbps.

The city’s mayor and LGU provided logistical and regulatory support, while NOCCI provided fixed wireless solar technology and a redundant broadband network design to ensure uninterrupted connectivity for the villagers.

EDC provided funds for the cost of labor and the purchase of the necessary materials and equipment, Bautista said.

Meanwhile, Du praised the “exemplary collaboration”, saying it should “serve as a model for public-private partnerships and a showcase for all LGUs in the country, especially in these difficult times.”

He said there are students and even employees who go to the city’s gymnasium, bringing their gadgets for their online classes and work, respectively.

EDC’s Assistant Vice President for Corporate Social Responsibility and Public Relations Lawyer Allan Barcena, in his post via Zoom, said the e-community project was conceptualized in 2019 with Du , to allow residents to do research and even e-commerce. .

â€œThis e-communities project is our way of fulfilling EDC’s mission of forging collaborative pathways for a carbon-free and regenerative future, which is all about creating exponential positive impact by uplifting our environment and our stakeholders,â€ said Barcena. .

â€œWhile we know we have a long way to go to replicate this initiative in our other partner communities, today’s event is a victory we should all celebrate. This lighting ceremony is proof that no crisis can prevent us from uplifting our communities if we all work together to achieve it, â€he added.

This pilot project of EDC, DICT, NOCCI and Valencia LGU will soon be replicated in other EDC partner barangays in the municipality to establish similar e-communities.

For nearly 40 years, renewable energy leader EDC has provided an uninterrupted 24/7 source of clean energy to Negros Island and other parts of the Luzon and Visayas regions from its Valence geothermal installation.

The company’s nearly 1,200 MW geothermal portfolio comprises 62% of the country’s total installed geothermal capacity and has put the Philippines on the map as the 3rd largest geothermal producer in the world. (ANP)