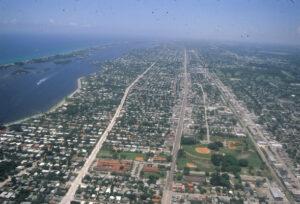 A proposal to create a civilization zone system

Wonderfully, when one watches ancient highways slowly crack and tumble down cliffs to the sea, the concept of “permanent changes in the human landscape” can be seen as illusory.

Most of you suffer from the illusion that structures such as poorly placed dwellings, on floodplains or near the ocean[s] are not as old or permanent as you imagine. Where I was born, I saw ship hulls tornadoed up in the forest treetops. I also saw harbors and boats after the hurricane changed irrevocably, visiting partially to completely sunken ships, and piers made of huge rocks completely gone.

I have recently been contacted by strong seekers of new power lines for new desert grids that cover xeric habitat (what you would call a “wild” desert, but what I know as delicate living landscapes. I guess i will fight THAT for a while, until events and common sense place these grids entirely on human habitations, and the “power grids” become history, as do the thousands of excrement shovelers of horses formerly employed in New York.

however, do NOT be so sure about “permanence”. Lassen, Shasta and the Cascades down to Baker and Shuksan are not dead, only asleep.
Earthquakes in the subduction zone[s] Here the plates are still pushing under North America, and although most of you forget, small earthquakes are frequent every month over several days.
St. Helens was farther from the human highways than many of them.
I’ve seen rivers change their decisions of where to go out to sea in a season, a year, suddenly deciding to carve out a cliff town for a few years, before choosing again.
Interesting storms are passing, from Sydney to the Atlantic coasts, moving slippery earth on old homes, even in extremely wealthy Montecito, as heavy rain floods places where wildfires have occurred.

These are not disasters, except for the organisms that took root there at the time. (In fact, once we were caught by a landslide on a cliff. Just another beautifully interesting occurrence on the safari of life. But instructive as to the illusion of “permanent human structures”.

One night, with the windshield wipers beating fast, still unable to clear the windshield, I was practicing my Spanish with a photographer living in a desert village where, as I asked, “I have a herd that he doesn’t sometimes not rain here for 4 years”. He replied, “Once it didn’t rain for six years.” We stopped from the arroyo to watch the flash flood take the level road below and behind. Another time, I was running for exuberant action in another arroyo thousands of miles away, suddenly hearing and seeing a slow rush of brown mud. Climbing quickly onto the embankment slightly above, I looked, once again. al who had grown up there during the decade I had visited periodically, disappeared.

The barrancas so covered with high chaparrals, long shaded oases – right now we live in a time when there are few of what the Aztecs call Ocelotl, eh the Spaniards call tiger, and we call jaguars, live there not. But they will come back, highways or dams or off-road 4×4s all believing they own or control the landscape. But run there, alone. Or in the twisted forest of Yellowstone. You will constantly feel the presence of the owners.

Some, like the Ainu kamui of fire, growl softly like a roaring bull. But once in a while, they wake up. Those 100 to 130 years of machines, the 100 years of paved roads – even humans have lived longer than that.

Towns that you think are permanent have sometimes grown up over the last 20-40 years. How arrogant is it to believe that the illusion afforded by novelty is confused with permanence.

here and there along the Ring of Fire are volcanoes known to have woken up, causing years[s] without summer. Some storms I have noted in the Gulf of Alaska bring stronger winds than all but the highest hurricanes. No strong solar ion storms have occurred since the recent advent of wireless phones and the Internet. Some of the random deviations are considered by scientists to be anomalous, less common than longer historical norms.

In this century alone – 22 years, two major pandemics with much higher death rates have been narrowly avoided. You’ve seen with this one so far that roughly 1 in 1000 people lost their lives, how medieval humans refused to take reasonable precautions, instead blaming hate, doing violence to each other. What makes you BELIEVE that a minor random pairing or tripling of such events will not change your illusions about “permanent” human structures?

It is NOT a “catastrophe, again, for a human structure to be reabsorbed by the earth, whether it is miles of highways – which BY THE FACT DID NOT EXIST 65 years ago – or resort towns built below projected sea level 50 years from now.
The Pacific crustal plate is moving up the Gulf of California, currently dissipating southwest of the Hoover Dam (only there for the past 85 years, with two other major dams 30 years younger. The Columbia River dams also have no only about 65 years old, some built just within sight of large lava flows), with fault lines extending into the Great Basin – the transverse San Andreas is not the subductino zone, which is only restored just at the south of Cape Mendocino. The African plate that pushed the Alps and the Apennines and the Turkish mountains. There are interesting volcanoes, from one whose caldera has raised the very ground where I slept for years a meter a day, and skied over hot vents that form clumps of snow on the running surface, with steam rising around it.

While we are in our own way as ephemeral as butterflies, I suggest that measured “permanence” at all is an easy fantasy. A man I knew from the east coast finally achieved his dream of moving to Hawaii. There, his place, and many others, as well as the road leading to it, were covered and burned in three years.
I was blown into a southern ocean storm within sight of a dormant volcano in the most active area of ​​earth, where you recently heard of a “big bang” eruption picking up a new island connection.

Animals, whether it’s ourselves or Bison crossing the roads to Hebgen, do NOT evolve for “permanence”, but for movement, response, agility. , only fat people armed with their toy popgunsand [temporarily] incessant light pollution. There is, you see, no REAL movement, no agility, no nature visible to the technician there. Stopping by the horseshoe crabs, a beautiful ancient species, reminding me of the trilobites that lived for about 270 MILLION years. My childhood, included both wolves and horseshoe crabs – both exploited by an arrogant species that only lived 1/4 million years, so much so that both are in mortal danger by the most foolish of us, and OUR brains are measured to have shrunk by 15-20% over the past ten thousand years, as we ourselves become more subservient and violently surly over nothing of importance.