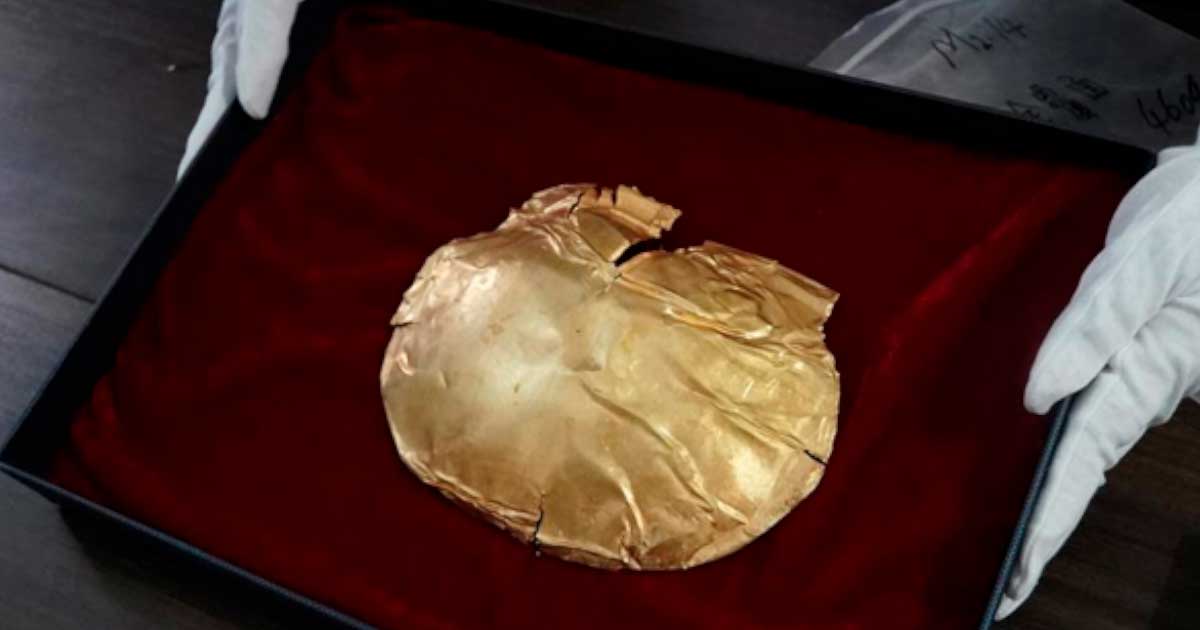 A 3,000-year-old gold burial mask from the Shang Dynasty (1600-1046 BC) has been unearthed by archaeologists on the Yellow River about 600 kilometers (373 miles) northwest of Shanghai . Found in the tomb of a former nobleman in Zhengzhou, the mask wasn’t the only find – several other relics and artifacts (over 200 in total) from the Shang dynasty were also found, shedding light on rituals around the ceremony of death and burial.

The gold mask weighs around 40 grams and measures 18.3 x 14.5 centimeters (7.2 x 5.7 inches) – large enough to cover an adult’s face. Together, these rare finds in Zhengzhou reveal that the Shang people had a strong gold culture, further expanding our understanding of the ancient and mysterious culture.

The ancient Shang dynasty ( 1600-1046 BC ) wall that once surrounded the site of Zhengzhou Shangdu, where the rare gold burial mask was recently unearthed. (Robinlun / CC BY-SA 3.0 )

A Yellow River crucible and a unique gold funerary mask

Dating back to the early stages of Chinese civilization, the Zhengzhou Shangdu site is one of the world’s first melting pots, as a press conference revealed on Friday. Another press release from China’s National Administration of Cultural Heritage explained that the ancient city had great influence along the middle sections of the Yellow River, the official news agency reported. Xinhua.

“There was a saying about bubaijinshenor an imperishable body of gold, since ancient times in China. [The gold funeral mask] proves that the concept has existed since the Shang Dynasty,” said Gu Wanfa, director of the Zhengzhou Municipal Cultural Relics and Archeology Research Institute. Quoted by Henan Broadcasting System, Gu further explained the distinction between the Sanxingdui gold masks and the current discovery, stating that the Zhengzhou Shangdu mask covered the entire face so that “spirits could remain whole.”

Other Discoveries of Zhengzhou Shangdu and Ancient Chinese Civilization

The Zhengzhou Shangdu burial site of the Shang Dynasty noble was a giant 10,000 square meter (107,640 sq ft) art gallery. It contained a wide array of grave goods, all of the highest quality, reported the world times .

There were a number of bronze and jade artifacts and weapons, but it was the gold burial mask that really stood out. Other gold objects found in the tomb included turquoise-encrusted sheets and plates and gold shell coins (metallic imitations of earlier cowrie shell coinage).

Renowned museologist and researcher at the National Museum of China, Chen Lüsheng, speculated that these discoveries are likely to shed new light on the origins of Chinese civilization. “Although this golden mask is older than those discovered in the Sanxingdui ruins, we still need more evidence and more archaeological finds to confirm a direct link between the ruins of the city of Shang and the ruins of Sanxingdui,” Chen said.

Eleven archaeological projects and 200 successful excavations, under the auspices of the National Cultural Heritage Administration, have been underway since 2018 to develop an even better understanding of the early stages of Chinese civilization. Notable sites include the Erlitou Ruins of Yanshi, dated 3,500 to 3,600 years ago, and the Bicun Ruins of Shanxi Province in northern China, dated 3 700 to 4000 years old.

These 200 archaeological projects are almost all centered in the regions surrounding the Yellow River, often considered the cradle of Chinese civilization. However, some Western observers believe that China’s ultimate goal is to prove that it is the cradle of civilization in general.

Last month, the National Administration of Cultural Heritage revealed that 1,800 cultural relics taken overseas had been returned to China in the previous decade.

Archaeologists like Gu have important questions that only deeper research will answer. If the gold funerary mask was made locally, where did the gold come from? Did the locally made masks then spread further south-west? Did the Shang culture have common links with the much later ruins of Sanxingdui and the Shu dynasty?

And if gold was traded with other cultures, that raises the question of long-distance trade with other civilizations. Thus, the Zhengzhou Shangdu gold burial mask is rare and amazing and can tell us more about burial customs, society and trade in Shang Dynasty China.

Top image: The rare gold funerary mask from the Shang dynasty (1600-1046 BC) recently found in the tomb of a nobleman in Zhengzhou, China. Source: Xinhua