Following a significant development proposed for the northeast urban area of ​​Huntsville, the time it took for the City of Huntsville and the District of Muskoka to render a decision on the development applications for a property of 40.1 hectares (99,089 acres) at 174 Earls Road. has made its way to the Local Planning Appeal Tribunal (LPAT), but staff say the application is not complete and there are outstanding issues.

According to City Planning Director Richard Clark, the zoning request was first submitted on February 27, 2020, as part of a subdivision plan project to create 287 single-family and new residential lots. Multiple residential lots, each to contain a maximum of 72 units — for a total of 935 residential units. Three blocks are proposed for stormwater management and park recreation. Access to the development would be via an interior public road network connecting Earls Road. According to the applicant, the number of units proposed would represent a density of 23.3 units per gross hectare while the City’s Official Plan (OP) notes that the average density target for new development is 17 units per gross hectare. .

The applicant appealed to the LPAT noting that the municipality took more than the allotted three months to make a decision, but Clark told the Huntsville Planning Committee at its January 13 meeting that the application was incomplete. and that it had not been distributed for a public meeting regarding the plans “because city staff were advised by the applicant’s agent that they may require a review to take into account the planned changes resulting from the work of field and the updated environmental scan which should take place later in the year ”.

He said the draft subdivision plan and rezoning requests were subsequently revised in September 2020 to reflect the findings contained in an addendum to the environmental impact study conducted on the land. The revisions involved the addition of a conservation block to protect sensitive natural features along the eastern boundary of the property.

“As a result of this change, all other proposed areas have been reduced in size and the frontage of the low density lots has been reduced to 12.2 meters,” said Clark, adding that the changes resulted in the loss of two lots. residential, minor modifications to internal roads and reductions in the area of ​​several residential blocks adjoining the conservation block.

“Unfortunately, prior to the submission of these revisions, the applicant had initiated an appeal process on the draft plan of subdivision (which is approved by the District of Muskoka) on the basis that there was not yet had the district’s decision regarding the matter, “Clark added. He said the appeal was filed on April 14, 2020 and the applicant also appealed the zoning by-law change application (which is approved by the City) dated December 23, 2020.

He said that due to the changes to the environmental impact statement, many supporting studies were completed without the updated recommendations in the environmental assessment. “Accordingly, these documents should be reviewed and amended accordingly by their authors. “

He also stated that there is an outstanding concern regarding a 2.13 hectare wetland which was not recommended for protection in the revised environmental assessment, despite the OP’s policies regarding these wetlands. He also said that the traffic and stormwater impact studies had not been peer reviewed due to the anticipation that they might change pending the results of the updated EA report. regarding the mitigation of impacts of infiltration areas contributing to upstream flows to tributaries of Gypsy Bill Creek.

Clark also noted that the proposed stormwater management pond itself is located in part within the conservation block identified to protect natural features.

He also said that staff had requested a visual impact study, “and although one has been submitted and contains a site plan with buffer zones for the retention of mature vegetation and construction directions necessary to mitigate the visual impacts, none of these measures is reflected in the configuration of the subdivision block or in the proposed zoning.

Clark also told the committee that height and density transition policies in the Huntsville PO had not been addressed.

Given the scale of the proposed development, in October 2019, staff recommended that a secondary plan be undertaken for the northeast urban area surrounding the lands in question to ensure that the area would be developed comprehensively. An interim control regulation was also discussed to prevent development from occurring for a year until the study is complete, but Clark noted that no such regulation has been passed.

The file is still before the LPAT and staff should report back to the committee on the matter. You can find the full staff report here.

Register now here to receive our summary by email with links to our most recent stories.
Local news delivered to your inbox three times a week! 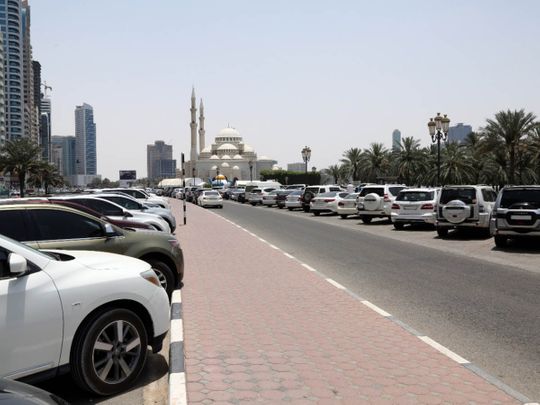 Sharjah: The municipality of Sharjah announced on Sunday the establishment of free parking for the elderly across the emirate. The service will go into effect from January 19.

The new initiative is based on the visions and directives of His Highness Dr Sheikh Dr Sultan bin Mohammad Al Qasimi, member of the Supreme Council and Sovereign of Sharjah. It aims to meet the needs of the elderly, Sharjah Municipality said. The municipality further stated that the elderly in Sharjah will be exempt from public parking fees and will receive free annual subscriptions which will allow them to park in all public parking lots in the city at any time. Through this initiative, the municipality aims to provide the elderly with means of comfort, considering that public parking is one of the most important services necessary for everyone circulating in the city.

Ali Ahmad Abu Ghazin, director of the public parking department, asserted that the municipality will provide this service to the elderly in Sharjah according to certain defined parameters, such as, an applicant must be a citizen of the emirate, must be 60 years of age and over . and it will not apply to parking in spaces reserved for people with special needs and those reserved for commercial establishments and others, unless the applicant is eligible to be a direct beneficiary of the service in this category of space. In addition, each family will only benefit from one subscription for an elderly family member.

Abu Ghazeen noted that it is possible to request the service through the municipality’s website, starting January 19, by going to the site and choosing the option of smart and electronic services. Copies of the Emirates ID, registration summary and vehicle title deed in the name of the beneficiary or one of their first degree relatives will need to be provided at the time of registration.

In tune with digital trends

The municipality will begin providing these subscriptions virtually, through its website, in line with digital trends and in an attempt to save time and energy. This initiative is one more step to ensure the digital transformation of the emirate.

Al Turaifi further stated that around 3,000 people could benefit from this free parking.

At the same time, Khalid bin Falah Al Suwaidi, Deputy Director General of the Customer Service Sector of the Municipality of Sharjah, explained that this initiative reflects the municipality’s concern to help preserve the emirate’s membership in the international network of friendly cities. seniors and is part of other initiatives it has previously launched to meet the needs of this segment of society. He is also keen to present the emirate as a destination where residents and visitors can enjoy quality living and a sustainable environment, where all elements of modern life are incorporated to the highest international standards.

The Municipality of Sharjah welcomes comments and inquiries from the public on this or any other service by calling its call center on 993, which operates 24 hours a day to respond to inquiries.